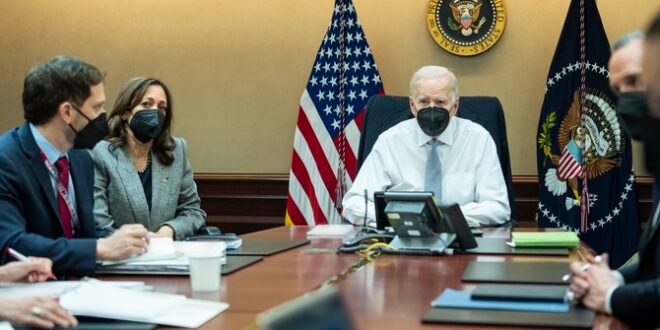 Terrorist roads all lead to Tehran

US President Joe Biden surprised the world last week by announcing the death of the leader of Daesh, Abu Ibrahim Al-Hashimi Al-Qurashi, who had led the terrorist group since the killing of his predecessor, Abu Bakr Al-Baghdadi, in a US raid in 2019.

According to the president, Iraqi national Al-Qurashi was responsible for the recent attack on a prison in northeast Syria that was holding Daesh fighters and was also the driving force behind the genocide of the Yazidi people in northwestern Iraq in 2014.

“We all remember the gut-wrenching stories: Mass slaughters that wiped out entire villages, thousands of women and young girls sold into slavery, rape used as a weapon of war. And thanks to the bravery of our troops, this horrible terrorist leader is no more,” Biden said.

Despite the domestic and international challenges facing the US administration, especially the fears of a Russian move on the Ukrainian border, the White House wanted to deliver a global message that Washington will continue its war against terrorism and extremism wherever they are. Biden also wanted to erase the negative image of the US military’s chaotic withdrawal from Afghanistan and restore confidence in its ability to carry out successful missions.

Eliminating a terrorist leader will provide the president and his Democratic Party with a much-needed push before the US midterm elections and a foreign policy victory in case his efforts to revive the Iran nuclear deal fail.

Undoubtedly, the world is much safer without Al-Qurashi, but will Daesh collapse as a result of his death? Absolutely not. The death of Al-Baghdadi did not end the terrorist group, nor will the killing of Al-Quraishi prevent it from executing more attacks against innocent people, especially in the Middle East and North Africa.

Dr. Hans-Jakob Schindler, senior director of the Counter Extremism Project and former coordinator of the UN Security Council’s Daesh, Al-Qaeda and Taliban Monitoring Team, predicted that retaliation was likely once the group has named Al-Quraishi’s successor. “Most likely it is going to be an Iraqi, simply because there is a big structure in Iraq and Daesh is originally from that country, and they chose Al-Quraishi because of his tribal affiliation,” Schindler told the Jerusalem Post.

As soon as 2022 began, Daesh strongly returned to the fore by carrying out operations in unstable countries such as Iraq, Syria and Libya. Last year, the group managed to significantly increase its funding, which led to the reorganization of its ranks in these countries, especially Iraq.

It is not surprising that Daesh’s terrorist operations have been escalating amid the Iraqi political dispute. The results of last October’s elections pulled the rug from under the feet of the pro-Iranian militias, who had insisted on taking all the credit for the liberation of Mosul and the defeat of Daesh in 2017. The leaders of the Iranian proxy militias and their supporters act as if they control Iraq and its citizens under the pretext of protecting their honor and liberating their lands.

Suppose that Daesh is ultimately defeated and all its sleeper cells in Iraq are eliminated. In that case, the many pro-Iran militias would no longer be needed, but Tehran strongly rejects this. To serve their own political interests, militia patrols and checkpoints are required to turn a blind eye to the movement of Daesh members and even facilitate their attacks.

Simply put, if Daesh dies in Iraq, so too do the pro-Iran militias.

Meanwhile, in Syria, the presence of the terrorist group gives Bashar Assad, who continues to murder his own people, global legitimacy and a valid argument. This also benefits the regime in Tehran.

If we take a closer look at the map of this troubled region, all roads lead to Tehran.

History will describe the war against terrorism as one of the most prolonged and bloodiest wars of all time, as long as this dangerous ideology continues to receive oxygen.

Post Views: 102
Previous Anti-Liberal Russian Philosopher Dugin In Article Titled ‘Russia And China As The Vanguard Of Multipolarity’: The West-Led Unipolarity Is ‘Collapsing’
Next Iraqi militia attack on UAE a ‘message from Iran’