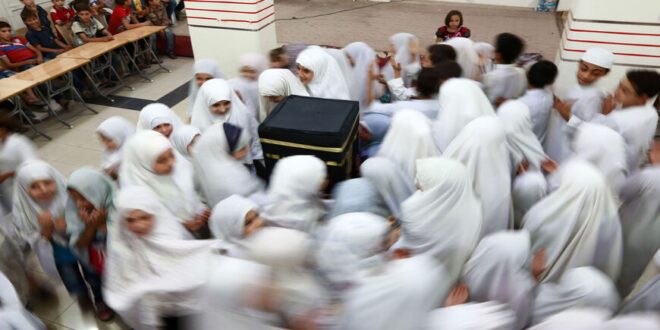 The influence of religious schools is growing in Idlib, with their fundamentalist curricula under the supervision of Hayat Tahrir al-Sham.

Amid the deteriorating conditions in public schools in Syria’s northwestern province of Idlib and lack of funding, with teachers who have worked without getting paid for years going on regular strikes, in addition to the high cost of living and the bad economic situation, religious schools have proliferated across the area.

One of the most prominent religious schools in Idlib is Dar al-Wahi al-Sharif, which consists of an educational institution that teaches the Quran and Sharia through several affiliated schools. It is affiliated with the Ministry of Education of Hayat Tahrir al-Sham’s (HTS) so-called Salvation Government. However, its curricula is not issued by this ministry and is not taught in other schools in the area. The curricula is prepared by Dar al-Wahi al-Sharif officials, who are affiliated with HTS.

Dar al-Wahi al-Sharif, which opened in Idlib in late 2017, works to attract large numbers of pupils in the area, offering attractive incentives and benefits, in a bid to educate a more ideological generation that would carry HTS’ ideas and serve its interests.

Dar al-Wahi al-Sharif’s schools are based on gender segregation for both students and teachers, restricting female teachers to female students.

HTS leader Abdullah al-Shawi is the chairman of the board of directors of Dar al-Wahi al-Sharif. Hashem al-Sheikh, who served as the group’s head in 2017, is a member of the institution’s board.

He said, “We aim to open other affiliated schools in the towns of al-Dana, Khirbet al-Joz and Jisr al-Shughur. We have 7,000 male students and 6,500 female students. Our curricula combines Sharia and regular courses.”

Zaidan noted, “Education at Dar al-Wahi al-Sharif is free as opposed to public schools that charge students a small tuition fee each semester, which has become burdensome for families that have many children. Dar al-Wahi al-Sharif also provides private bus transportation, which reassures the parents. Our classes are equipped with heating and cooling systems.”

He added, “We also give students free uniforms at a time when many parents can no longer afford to buy school uniforms for their children amid the deteriorating economic conditions. Meanwhile, teachers get paid at the end of the month without any delay. We also hold competitions and offer rewards to encourage students to excel in their studies.”

Dar al-Wahi al-Sharif is funded by HTS through its border fees. The Bab al-Hawa border crossing with Turkey, and the crossings between HTS areas of control and those held by the Turkish-backed Syrian National Army, impose a fee of $10 on imported goods, dubbed the “education fees.”

Other fees are deducted from official transactions in the departments that are affiliated with the Salvation Government and are dedicated to Dar al-Wahi al-Sharif.

Abbas Sharifa, expert on radical Islamic groups and researcher at the Jusoor Center for Studies in Istanbul, told Al-Monitor, “HTS has followed a systematic plan through a series of steps to control the civil education sector in Idlib and turn it into an ideological religious education according to the ideas it espouses. It started by closing many independent Sharia institutes or those affiliated with other factions. HTS made sure to have a strong presence in the Education Ministry [of the Salvation Government] and all key positions by appointing figures that are close to it.”

Fadel Abdul-Ghani, director of the Syrian Network for Human Rights, expressed his concerns about the future generations that would grow with fundamentalist ideologies, and blind allegiance to HTS leaders, who appear to be seriously working on spreading their influence in all administration and power clogs in Idlib.

“This would have a really bad impact in case HTS decided to take advantage of these children and recruit them to fight in its ranks. It already uses a large number of child soldiers,” he told Al-Monitor.

He said, “The Quranic schools, although they offer advantages and incentives, are usually the parents’ last resort in Idlib. They are torn between paying money for a good education for their children or going into the unknown by removing their children from school. HTS takes advantage of these vulnerabilities and loopholes in all sectors to instill its ideas, which is very similar to the style of the Iranian militias that endeavor to open Hussainiyas [congregation halls for Shiite ceremonies] to spread its Shiite ideologies and inculcate them in pupils and civilians.”