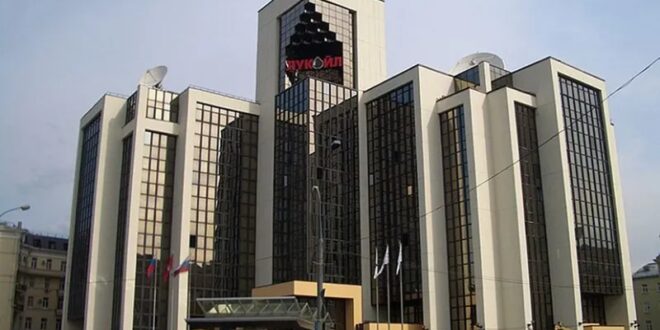 “The champion of our petrochemical industry.” So boasted Todor Zhivkov, then-communist leader of Bulgaria, when the country’s first oil refinery at Burgas on the Black Sea coast launched operations in 1963.

Nearly six decades later, Bulgaria’s planned economy may be long gone, but the so-called champion continues refining oil into gasoline and other petroleum products. It is not only the largest such energy enterprise in Bulgaria but the entire Balkans region.

One key aspect, however, has changed: ownership. The refinery at Burgas is no longer owned exclusively by the Bulgarian state. Russian energy giant LUKoil is the master now.

And by nearly all metrics, LUKoil Neftochim Burgas, as the company is now called, is a huge success, generating some of the highest revenues in Bulgaria, totaling more than the equivalent of 40 billion euros ($45.7 billion) over the past 15 years. The company dominates the Bulgarian market, the country’s Anti-Monopoly Commission says, with nearly every vehicle on the roads in Bulgaria running on the fuel from the refinery in Burgas.

But instead of making cash hand over fist, the Russian-owned refinery regularly declares losses in Bulgaria. At least on paper.

Since at least 2006, the company has regularly reported yearly financial losses with few exceptions. In 2020, the amount was a whopping 500 million lev ($292 million). No declared profits mean no income taxes paid into Bulgaria’s state coffers.

How huge sales equals meager revenue is something that doesn’t compute for more and more officials in Bulgaria.

“Ten years without profit, when you are a giant on the Bulgarian market…how is this possible?” Rumen Spetsov, head of the National Revenue Agency, recently asked.

In recent months, the finance minister and head of the tax agency have raised their voices, urging action be taken to close the apparent grand tax loophole that experts say involves an accounting sleight of hand known as “transfer pricing.” As a result, profits are transferred, on paper, from Bulgaria to Russia.

The latest chapter in the history of the Burgas refinery dates back to its privatization in 1999 when the government approved the sale of 58 percent of the capital of Neftochim-Burgas. The bidder was LUKoil Petrol, a subsidiary of the Russian energy conglomerate, and the price paid was $101 million.

LUKoil, the second-largest Russian energy company after Gazprom, manages and owns oil and gas fields, as well as refineries, trading in energy in dozens of countries.

Ivan Kostov, the Bulgarian prime minister at the time of the privatization, said only Russian companies had expressed an interest in acquiring the Burgas refinery.

That was no surprise as Burgas was equipped with Soviet-era technology and depended on oil imported from Russia for refining. Sofia did make sure that it retained a so-called golden share in the newly privatized firm, guaranteeing, in principle at least, a voice in any strategic decisions. More than 20 years later, however, it appears the Bulgarian government rarely if ever has interjected its voice in any of the decisions taken in Bulgaria by LUKoil.

Over the years, LUKoil solidified its control over Burgas, buying up more shares, in particular those handed out to employees at the time of privatization. Today, the main shareholder in LUKoil Neftochim Burgas is Litasco with 89.97 percent and the LUKoil Oil Company with 9.88 percent. (The remaining 0.15 percent is owned by more than 7,700 individuals and legal entities.)

Litasco is registered in Switzerland and is a subsidiary of LUKoil, which acts as its exclusive buyer and seller on the international market.

Dominant market position, high demand, robust revenue. It all sounds like a bonanza for any business. And LUKoil’s operations in Bulgaria enjoy all that. However, the Russian energy concern, as its accounting statements indicate, is operating at a loss in Bulgaria. And that’s a concern for Sofia as it means LUKoil is not paying any corporate income tax when it’s in the red.

In 2011, Vanyo Tanov, at the time the head of the Bulgarian Customs Agency, complained the refinery was a “zero taxpayer.” Tanov said his agency was probing whether LUKoil Neftochim Burgas was being sucked dry by a “Swiss-registered subsidiary that stands at the entrance and exit of the plant,” apparently referring to Litasco.

“This company ultimately determines both the price of crude oil and the amount that is exported. It’s probable that profits are accumulated in this firm and thus make LUKoil appear to be a loss-making company,” Tanov said at the time to Bulgarian media.

Tanov later spearheaded efforts to install meters on pipelines connected to the Burgas refinery, in a bid to better monitor exactly how much oil was coming into the refinery.

At the time, in 2011, the Customs Agency issued what was considered an unprecedented statement of “suspicions that our country is ruled by an oligarchy.”

“Tonight, a heavy shadow of foreign interests has fallen over a member of the European Union and NATO,” the Customs Agency said in the statement.

‘The Only Loss-Making Refinery On the Planet’

In 2016, the then-representative of LUKoil in Bulgaria, Valentin Zlatev, was called before a committee in the National Assembly, Bulgaria’s parliament, to address concerns over the firm’s suspect flaccid financial results.

LUKoil Neftochim Burgas had paid the equivalent of 78 million euros in corporate tax, “but actually operated at a loss for the last three years (2013, 2014, 2015),” Zlatev noted.

“Unfortunately, there are times when oil becomes so expensive that the fuels it produces [from it] are cheaper than the actual oil,” said Zlatev, who is known to have been on friendly terms with many of Bulgaria’s political elite, including former President Georgi Parvanov, and former Prime Minister Boyko Borisov.

In 2020, the refinery’s alleged financial woes were again discussed in parliament.

“LUKoil Neftochim Burgas is the only refinery on the planet that is losing money,” Rumen Gechev, a lawmaker from the Bulgarian Socialist Party, told the assembly at the time.

Then-Finance Minister Vladislav Goranov explained that the National Revenue Agency had twice registered huge negative results from the refinery. According to Bulgarian legislation, Goranov explained, those losses could be deducted, or spread out, over five years.

Goranov’s explanation was met by skepticism and doubts, especially among members of the then-opposition Democratic Bulgaria coalition, which demanded the country’s revenue agency release its audits of LUKoil Neftochim Burgas.

A court did order the National Revenue Agency to release those audits. To date, despite enquiries from journalists, the agency has failed to comply.

How Losses Are Created

LUKoil’s operations in Bulgaria do not explicitly contradict or violate the country’s legislation, experts say, and appear to depend on an accepted accounting method: transfer pricing. What appears to be a financial sleight of hand is often used by companies that control the entire production process — from the supply of raw materials through to the final product and its sale. And that describes perfectly LUKoil’s operations in Bulgaria.

“In the case of LUKoil, the company produces crude oil, delivers it to the Burgas refinery, and then sells fuel,” Martin Vladimirov, an analyst of the Sofia-based Center for the Study of Democracy, told RFE/RL’s Bulgarian Service.

Hristo Ivanov, the co-chairman of Democratic Bulgaria, suggested in 2020 that LUKoil may have avoided paying the equivalent of 500 million euros thanks to transfer pricing.

Litasco is the key player in the transactions, Vladimirov explained. It buys crude oil from Russia’s LUKoil and then sells it to the Burgas refinery. Behind these three seemingly separate companies is LUKoil. Acting as the intermediary, Litasco seeks to buy low and sell high.

“The difference goes to Litasco, which is registered in Switzerland, where [corporate] profit/income tax is very low and there are legal options that allow this profit not to be taxed and go directly to Russia,” Vladimirov explained.

What About State Oversight?

During all the years of LUKoil’s control of the Burgas refinery, the Bulgarian state, as a minority stakeholder, has retained a seat on the company’s corporate board. During those years, Bulgaria’s political elite have enjoyed chummy ties with LUKoil’s Bulgarian representatives.

In 2011, Borisov, who served as Bulgaria’s prime minister between 2009 and 2021, said “Zlatev is my friend,” referring to the former representative of LUKoil in Bulgaria, Valentin Zlatev. Vagit Alekperov, the president of LUKoil, has been treated almost like royalty during past visits to Bulgaria, meeting with top senior Bulgarian officials.

RFE/RL requested comment from Zlatev about whether Bulgarian officials had ever raised tax issues with him. He did not respond.

“LUKoil was the biggest contributor to the [state] budget, and then there were many lean years,” Spas Garnevski, the first Bulgarian representative to sit on the board after the privatization of the refinery in 1999, explained to RFE/RL.

Rumen Ovcharov, who represented Bulgaria on the refinery’s board between 2013 and 2017, suggested LUKoil’s significant investment in Bulgaria won it certain unspoken privileges. Ovcharov told RFE/RL that it was not possible to “go very deep into the company’s financial statements.”

However, with political pressure growing in Bulgaria, LUKoil did announce in 2021 that it would end the accounting practice of transfer pricing or appeal the National Revenue Agency’s finding that it is liable to pay tax on the equivalent of 260 million euros.

But that may be unlikely as the company can use past posted losses, including the equivalent of 250 million euros in 2020 alone, to offset that.

Spetsov said in November 2021 that his agency was conducting a massive audit of LUKoil’s Bulgarian operations.

Bulgarian Finance Minister Arsen Vassilev told RFE/RL that the audit of LUKoil Neftochim Burgas was not yet finished, adding that Prime Minister Kiril Petkov and other senior officials met in December 2021 with Vadim Vorobyov, first executive vice president of LUKoil.

Despite the flurry of activity, Vladimirov of the Center for the Study of Democracy, is doubtful much if anything will change.

“This is a global scheme that is implemented by all Russian companies,” Vladimirov said. “The profits always go back to Russia.”