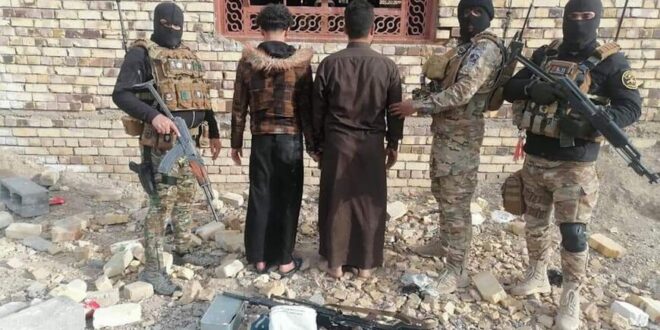 A wave of assassinations in Maysan province has led Iraqi Prime Minister Mustafa al-Kadhimi to establish a special operations command.

Kadhimi, who is also commander in chief of armed forces, visited this southern province bordering Iran on Feb. 9 and met with Maysan’s security services chiefs.

Ahmed Abu Ragheef, a member of Saraya al-Salam, which is affiliated with the Sadrist movement, was assassinated Feb. 9, in addition to Judge Ahmed Faisal on Feb. 6, and an Interior Ministry officer on Feb. 3. The high-profile incidents, combined with drug trafficking and armed tribal conflicts, prompted the country’s National Security Agency chief to dismiss Maysan’s security director on Feb. 8.

A three-day tribal conflict in Qal’at Saleh District caused a public protest demanding the dismissal of Maysan’s Governor Ali Douai, who has been in office for more than 12 years.

Many analysts linked the worsening situation to drug trafficking, particularly since the assassinated Judge Faisal focused on the drug file. Yet these incidents are also part of a political conflict between parties and tribes.

Maj. Gen. Saad Maan, director of the department of media at the Interior Ministry, told Al-Monitor that “the ministry formed a security delegation, led by Interior Minister Othman al-Ghanimi, to identify shortcomings and monitor security gaps.”

Maan revealed that the ministry is exchanging intelligence information, supporting and strengthening the security forces in the governorate, and boosting coordination between intelligence services in order to combat organized drug traffickers.

The insecurity and political unrest are not new in Maysan. On Oct. 25, 2019, the office director of Asaib Ahl al-Haq movement and his brother were killed during an attack on its headquarters by angry protesters. The two were also the brothers of Hussam Alyawi, the Interior Ministry officer killed on Feb. 3, and the head of Asaib Ahl al-Haq, Qais al-Khazali, pointed in a tweet to a political revenge.

According to analysts, the assassinations are part of an armed conflict between Asaib Ahl al-Haq and the Sadrist movement.

Fadel Abu Ragheef, a security analyst close to the Iraqi intelligence services and an expert at the Development Research Center, told Al-Monitor, “Maysan is gaining special security and political importance among the southern provinces due to serious power struggle for control over the province’s resources,” most importantly the border crossings.

At the province’s land border, he said, organized crime has “major influence, and the gangs’ members are settled in remote and fortified places. They even set up earth mounds, watchtowers, and guard posts.”

The Interior Ministry’s solution, Abu Ragheef said, “will be neither enough nor decisive because a political and partisan reconciliation between the conflicting forces over power and wealth is needed in Maysan. This requires fundamental changes.”

Haider Salma, a researcher on Iraqi and southern affairs, told Al-Monitor, “The Sadrist movement has been in control of Maysan province, which it perceives as its top stronghold after al-Hanana in Najaf.” There have been multiple waves of protest, he said, “prior to the mutual assassinations wave between Asaib Ahl al-Haq and the Sadrist Movement’s Saray al-Salam.”

Ghazi Faisal Hussein, director of the Iraqi Center for Strategic Studies, told Al-Monitor that the problem traces back to the 21 million unlicensed weapons in the tribes’ hands, “in addition to the spread of armed mafias which control the border crossings and ports, or the sale of smuggled oil.”

During his visit to Maysan, Kadhimi promised that crimes “will not go unpunished.” In order for it to succeed, the security file should be separated from politics and power struggle among the parties, which will not be satisfied with the operation to bring about security, as it threatens their interests and their areas of influence.

Post Views: 87
Previous Jihadi leader’s donation to IDP camps in Syria questioned as PR stunt
Next The potential impact of Ukraine-Russia conflict on the MENA region