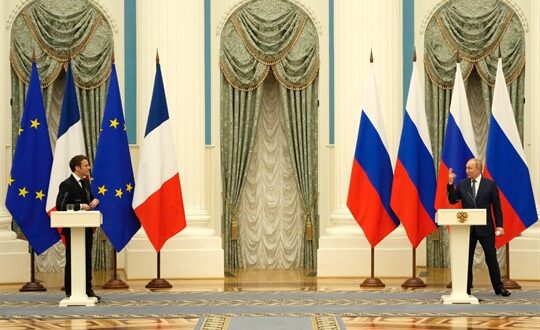 Macron’s Moscow Visit Fails to Break the Stalemate Over Ukraine

British Prime Minister Boris Johnson is in Brussels today for a meeting with NATO Secretary-General Jens Stoltenberg about the ongoing crisis in Ukraine. Their meeting follows a busy diplomatic week full of high-level meetings aimed at preventing the outbreak of war near the European Union’s borders. But with the week drawing to a close, it remains to be seen how much closer to a peaceful resolution of the crisis the parties have come.

The diplomatic flurry began Monday, when French President Emmanuel Macron met with his Russian counterpart, Vladimir Putin, in Moscow. Even before he sat down with Putin, Macron’s talking points raised eyebrows when they were released to the press ahead of the meeting. “We have to be very realistic,” an excerpt of Macron’s remarks read. “We will not obtain unilateral gestures, but it is essential to avoid a deterioration of the situation before building mechanisms and reciprocal gestures of trust.”