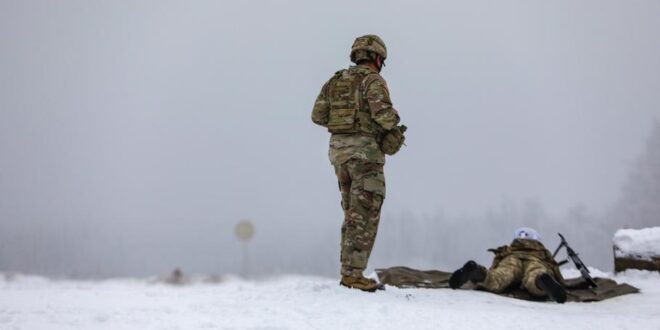 Pentagon orders US soldiers out of Ukraine as war fears mount

U.S. Army National Guard troops on a training mission in Ukraine have been pulled out of the country amid growing concerns about a possible Russian invasion, the Pentagon said Saturday.

About 160 members of the Florida National Guard, who have been in Ukraine since November, have been repositioned elsewhere in Europe, Pentagon Press Secretary John Kirby said in a statement.

Defense Secretary Lloyd Austin “made this decision out of an abundance of caution — with the safety and security of our personnel foremost in mind,” Kirby said.

The Pentagon did not say whether U.S. special operations troops also have been withdrawn from Ukraine. U.S. Special Operations Command Europe has a small training mission in the vicinity of Kyiv. As of Friday, those troops were still carrying out their mission, U.S. European Command said at the time.

The repositioning of Guard troops comes as the U.S. Embassy in Ukraine on Saturday began evacuating its personnel out of the country.

On Friday, The Pentagon ordered an additional 3,000 troops from the 82nd Airborne Division at Fort Bragg, N.C. to Poland, where they could arrive as early as next week. That comes on top of the 1,700 soldiers from the 82nd that have already be dispatched to the southeastern part of Poland, not far from that country’s border with Ukraine.

The Pentagon also has sent 1,000 Germany-based soldiers to Romania to reinforce defenses there. The moves are aimed at reassuring allies worried about Russian aggression in the region. U.S. President Joe Biden has said there will be no role for U.S. troops inside Ukraine should Russia invade.

But the U.S. soldiers in Poland could be tasked with helping to manage the flow Americans fleeing Ukraine in the days ahead.

On Friday, National Security Adviser Jake Sullivan said Americans should leave Ukraine within 48 hours given heightened concerns over the possibility for a Russian invasion. No U.S. forces will be sent into Ukraine to rescue Americans who have chosen to stay behind, Sullivan said.

Biden “will not be putting the lives of our men and women in uniform at risk by sending them into a war zone to rescue people who could have left now but chose not to,” he said

Kirby said that the moving U.S. forces out of Ukraine, where regular rotations of soldiers have been carrying out a training mission since shortly after Russia’s initial military intervention in 2014, doesn’t mean an end to support for Ukrainian forces.

“This repositioning does not signify a change in our determination to support Ukraine’s Armed Forces, but will provide flexibility in assuring allies and deterring aggression,” Kirby said.