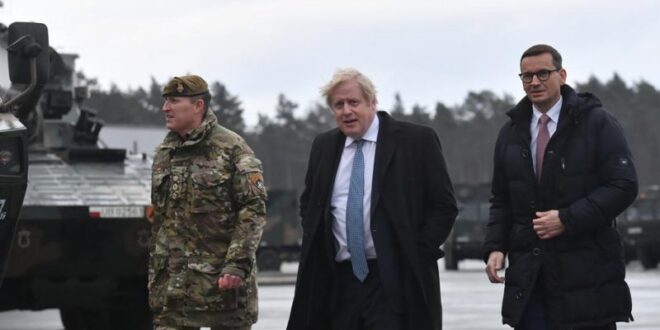 The first of 350 British marines have flown to Poland to bolster NATO’s eastern flank amid tensions over a Russian military build-up around Ukraine. The same day, Prime Minister Boris Johnson visited Poland to discuss the situation in Ukraine and the region with his Polish counterpart, Mateusz Morawiecki.

The troops from 45 Commando Royal Marines arrived in Warsaw on Thursday morning. Defence Minister Mariusz Błaszczak said he had arranged for their deployment during his visit to London on Monday.

“In the course of my talks with my counterpart, Ben Wallace […], we agreed that 350 British marines would strengthen the forces of Great Britain stationed in Poland,” Błaszczak said, adding that the British troops would “significantly strengthen security on NATO’s eastern flank.”

Johnson visited Warsaw on Thursday to meet Polish President Andrzej Duda and Morawiecki. Johnson, who headed to Poland straight after meeting NATO Secretary-General Jens Stoltenberg in Brussels, stressed that the marines that landed in Poland would join the other 100 soldiers sent to the country to help it combat the crisis at the Belarussian border.

“When Poland is in danger, the UK is always ready to help, as Poland has always been and still is ready to help us,” he emphasised, as quoted by Polish Press Agency (PAP).

The leaders discussed the security situation around Ukraine amid the risk of Russian aggression and the potential consequences of Moscow’s behaviour to the whole of Europe. “Poland and the UK cannot accept the world in which a great neighbour can threaten or attack another neighbour,” said Johnson.

Both heads of government opposed the Russian demand that Ukraine should not join NATO. “Each nation has a right to choose who governs it and decide about an international organisation that it wants to join,” Johnson argued.