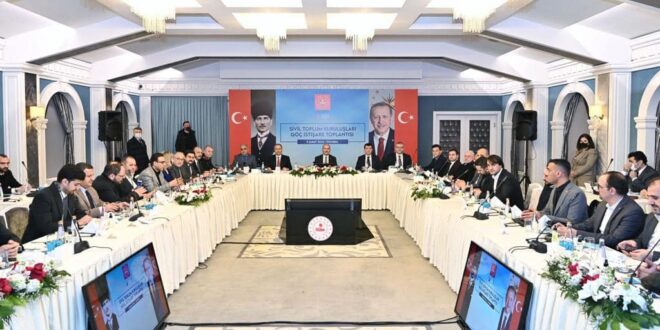 Syrian and Turkish officials met with Turkish Interior Minister Suleiman Soylu to discuss the situation of refugees in Turkey, according to al-Souria Net.

In a closed-door meeting on Tuesday, Syrian and Turkish officials met with Turkish Interior Minister Suleiman Soylu and Director of General Immigration Savas Unlu to discuss Syrian-related affairs in Turkey.

The “Solutions Table” group, an organization that its organizers claim deals with Syrian affairs in Turkey, said that the meeting with the Turkish Interior Minister resulted in “promising” outcomes for Syrians in Turkey. The organization referred to several points that were raised and discussed during the meeting, which was held in Istanbul.

According to the “Solution Table”, the most prominent points discussed were the cancellation of valid Syrian passport applications to renew Syrians’ residencies in Turkey. The organization explained that “long-term stays” will be granted to Syrians.

Mahdi Daoud, the general coordinator of the Solutions Table, told al-Souria Net that the meeting’s most prominent outcome was the agreement to hold regular monthly meetings. The meetings will include active figures on issues impacting Syrians residing in Turkey, as well as civil society institutions, to find out the latest developments and solve the problems facing Syrians in Turkey.

Dawood added that it had been agreed to establish an electronic portal to receive complaints filed by Syrians. The service will be similar to the Turkish platform Cimer, a communication platform between Turkish citizens and the President’s Office, to resolve citizens’ grievances.

The Solutions Table, which includes a group of associations and academic figures interested in Syrian affairs in Turkey, said that citizenship applications previously revoked by the Turkish authorities will be reviewed in cases where the reason for revocation was unclear.

She added that work is underway to coordinate a meeting with associations and activists in Syria. The organization will also form a body to bring the Syrian and Turkish communities closer together, with the aim of achieving better community integration.