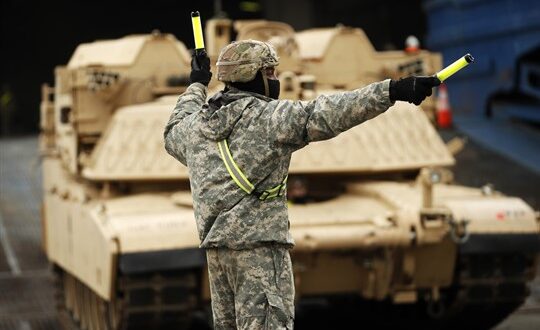 To Change Putin’s Behavior, the West Needs a New Strategy

Although the response in Western capitals to Russia’s aggressive military posturing on its border with Ukraine has been couched in clear diplomacy-first terms, military contingency planning has stepped up a notch in recent weeks. The intent of these moves, at least judging from the rhetoric of U.S. and NATO leaders as well as respected commentators, is to strengthen deterrence.

Deterrence, as Nobel Prize-winning U.S. scholar, Thomas Schelling, elaborated in his seminal 1966 book, “Arms and Influence,” is meant to prevent an adversary from taking future actions. Schelling distinguished it from a second strategy of coercion, compellence, which is meant to change an adversary’s existing behavior. Neither is foolproof, and both come with risks. But unless the West is clear about which strategy to pursue against aggressive Russian posturing, diplomacy may fail.

The West’s attempts at deterrence in the current standoff have so far taken two forms. First, there are the immediate measures intended to prevent further Russian military incursions into Ukraine, no matter how apparently minor. Threatened measures range from potentially devastating economic consequences the moment the first “Russian toe-cap” crosses the border, to military assistance to Ukraine and massive reinforcements on NATO’s Eastern flank. Both the U.S. and the U.K. have also used a form of “disclosure as deterrent,” revealing purported Russian plots—like plans to install pro-Russian leadership in Kyiv or launch a false flag or even fabricated attack in eastern Ukraine—before they take place to prevent Moscow from following through. Second, more general deterrence measures, from increased allied defense spending to consultations with Sweden and Finland about closer cooperation with NATO, have bolstered the preparedness, strength and solidarity of the alliance since Russia’s annexation of Crimea in 2014.

These are worthy actions in themselves. But they neglect the fact that deterrence has already failed as a strategy against Russia numerous times in the past 15 years—most recently in 2014 with the annexation of Crimea and war in eastern Ukraine, but also in 2008 with the military incursion into Georgia and in 2007 with large-scale cyber-attacks in Estonia. It seems clear that Russian President Vladimir Putin is on a mission to revise the regional and global security architecture. So it should come as no surprise that deterrence is failing once again, with Ukraine encircled by Russian forces and Putin putting his demands for a sphere of influence on paper.

One important but limited deterrence goal has survived intact: that of an armed attack on any NATO ally. But even the record here is mixed. Even though NATO added cyber-attacks and hybrid warfare to its Article V security guarantee in 2014 and 2016, respectively, NATO allies have experienced persistent hybrid attacks short of war, from election interference in the U.S. to the use of banned chemical weapons on British soil. Putin is already deploying the same playbook against Ukraine, including cyberattacks.

This record suggests it will take more than just deterrence to halt Russian revisionism. For its part, Moscow has long since switched from deterrence to compellence in its effort to force NATO to shift its forces back to their positions prior to the alliance’s expansion to former Soviet bloc countries in 1997. In fact, the entire manufactured crisis over Ukraine is an exercise in compellence: By assembling an invasion force and issuing maximalist demands, Putin is playing a game of “chicken” designed to get NATO to change course.

As such, should the West want not only to simply prevent the next incursion, but also to halt or reverse this established trajectory of Russian behavior, the strategic challenge becomes primarily one of compellence, not deterrence.

Compellence requires regaining the initiative by taking the ball and placing it in your own court. As Russian Foreign Minister Sergey Lavrov has now put it, “If the West continues its aggressive course, Moscow will take the necessary retaliatory measures.” This is what compellence looks like. It is a game the Russians are familiar with, partly because their broader conception of deterrence includes compellence.

In such a scenario, however, using the language of deterrence only compounds the problem, as every new commitment to deter Russia’s next encroachment signals de facto acceptance of the previous one. This is why Schelling, in “Arms and Influence,” saw the challenge of ambiguous “low-level” aggression—like the gray zone or hybrid threats and “salami tactics” at which Russia excels—as one of compellence, not deterrence because it is about preventing the “continuance” of something the opponent is already doing.

One reason for the West’s current hesitance to go beyond deterrence may be the assumption that it is a passive strategy, one that preserves the status quo while avoiding unnecessary provocation. But this logic is faulty on two fronts. First, despite NATO’s assurances that it is “a defensive alliance” which “poses no threat to Russia,” the “security dilemma”—whereby measures taken to enhance the security of one side invite countermeasures by the other to close the gap—suggests Russia has little choice but to take what it sees as the alliance’s encroachment seriously. Second, deterrence is no longer a viable strategy when Russia is already forcibly changing the status quo.

Of course, compellence is more difficult to put into practice than deterrence. For one thing, it requires the other side to lose face, although the skillful use of carrots and diplomacy can soften this blow. And according to “prospect theory,” actors already facing losses are likely to have higher risk tolerance. In this case, because Putin is convinced Ukraine is “slipping away” from Russia’s sphere of influence, he is increasingly willing to raise the stakes to hold onto it. Moreover, the historical record of using military coercion to compel behavior is patchy. One study suggests it has only been successful about half the time.

There are factors that are associated with success, such as demonstrating a consistent pattern of commitment, understanding an adversary’s perceptions and linking clear, specific demands to compellent threats—when it comes to compellence, ambiguity is generally not helpful. Other tactics may undermine coercion. For example, mixing threats of economic sanctions with threats of military action can give the impression that sanctions may follow regardless, leading the adversary to conclude they’re “damned if they do, damned if they don’t.” U.S. opposition to preemptive—or compellent—sanctions, which Ukrainian President Vlodymyr Zelensky has called for, might therefore be wise.

Sanctions aside, many of the steps the U.S. and NATO are currently taking look designed to compel. In addition to moving 3,000 troops into Poland and Romania, the U.S. canceled plans to sail the USS Harry S. Truman carrier strike group to the Indo-Pacific, keeping it in the Mediterranean and putting it under NATO command for the first time since the Cold War. European military units are being reassigned from other duties to NATO’s Eastern flank, while the British carrier HMS Prince of Wales is already on its way to the Arctic. France is preparing to deploy a new NATO Enhanced Forward Presence, or EFP, battlegroup to Romania, yet another “tripwire” force to demonstrate NATO allies’ commitment to frontline member states by putting “skin in the game.” Next week’s meeting of NATO Defense Ministers may yield further deployments.

These moves point to another factor contributing to the success of military coercion: moving forces from “outside-to-inside” the theater of concern—see the effect of Russian forces moving West, for example. In this light, NATO’s actions offer serious collective compellent potential. But framing them as intended to “assure and deter” undermines compellence and leaves the all-important ball of initiative in Putin’s court.

Of course, compellence is not just about hard power. Viewed from Moscow, the West’s continued support to Ukraine’s democracy and path toward Western integration is a powerful strategy of compellence in its own right. That is essentially how we got here.

It’s important to note the risks of compellence, which can push the other side “toward the brink.” This is by design, in order to change the opponent’s calculus. As Thomas Wright, a senior fellow at the Brookings Institution, puts it, “without the prospect of confrontation … [Putin] would have no reason to give up his goal of controlling Ukraine and undermining NATO.” Yet there are also risks in pursuing a strategy of deterrence that is already failing. These are the difficult choices leaders face in times of crisis.

Now is the time for the U.S. and NATO to decide whether they are trying to deter Putin from further incursions or compel him to change course. This is not to say that compellence is necessarily the wisest course in this case, given the risks of escalation. That is a judgment to be made by leaders—and history. What is essential, however, is strategic clarity. In particular, talking about deterrence while pursuing compellence is the worst of both worlds—costly, confusing and counterproductive.

Russia’s recent actions are the latest in an extended campaign of determined revisionism. Changing this trajectory requires compellence, not deterrence. This will be more difficult and riskier, but diplomacy stands a better chance of success if the strategy behind it is aligned with the desired outcome.