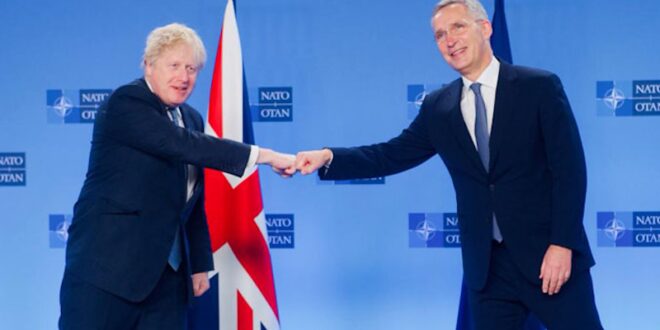 British Prime Minister Boris Johnson has warned that Russia’s military buildup near Ukraine, which the West suspects is a prelude to an invasion, has triggered Europe’s most serious security crisis in decades, as Moscow began holding joint military exercises in Belarus involving more than 30,000 troops.

As Johnson spoke in Brussels at a joint news conference with NATO chief Jens Stoltenberg on February 10, Britain’s foreign secretary, Liz Truss, met with Russian Foreign Minister Sergei Lavrov in the Russian capital, where she called on Moscow to withdraw its troops to show that it’s really interested in diplomacy.

European leaders and top diplomats have been scrambling across the continent to seek ways to tamp down tensions in a crisis that Johnson said had reached its most perilous phase. He called for a combination of diplomacy, economic coercion, and military strength to counter Russia’s actions.

“This is probably the most dangerous moment, I would say, in the course of the next few days, in what is the biggest security crisis that Europe has faced for decades, and we’ve got to get it right. And I think that the combination of sanctions and military resolve, plus diplomacy are what is in order.”

Johnson traveled later in the day to Warsaw for talks with Polish leaders and to meet with British soldiers stationed in the country.

“Poland and the U.K. won’t accept a world in which a powerful neighbor can bully or attack their neighbors,” he said before meeting the troops.

Stoltenberg echoed Johnson’s comment, saying Europe faced a “dangerous moment” as the amount of warning time the alliance would have before any possible invasion by Moscow was shortening.

“The number of Russian forces is going up. The warning time for a possible attack is going down…. NATO is not a threat to Russia, but we must be prepared for the worst while remaining strongly committed to finding a political solution,” Stoltenberg added.

In Moscow, Truss told Lavrov that Russia’s “very threatening posture” should be reversed and troops should be moved from the border with Ukraine.

“I can’t see any other reason for having 100,000 troops stationed on the Ukrainian border apart from to threaten Ukraine, and if Russia is serious about diplomacy they need to move those troops and desist from the threats,” Truss told a news conference in Moscow after her talks with Lavrov.
‘Threatening Posture’

“Minister Lavrov has said to me today that Russia has no plans to invade Ukraine but we need to see those words followed up by actions and we need to see the troops and the equipment that is stationed on the Ukraine border moved elsewhere, because at present it is in a very threatening posture,” Truss said.

Lavrov in turn said Russia rejected “ultimatums and threats” and that its interests need to be taken into consideration and respected if there is to be a de-escalation of the crisis.

“We support the normalization of our relations, their improvement and resuming constructive development,” Lavrov said at the news conference.

“Of course, this is possible only if they are based on the principles of equality and respect for each other’s interests. Imposing any conditions, ultimatums, and threats will definitely lead to nowhere. The relations should be a two-way street,” he said.

While tens of thousands more Russian troops have massed in other border areas near Ukraine, the Kremlin has denied it is planning an attack, saying it has the right to move its troops as it sees fit across its own territory and its allies’ territory with their agreement. It says its military exercises are defensive in nature.

Responding to Truss’s comments at the same news conference, Lavrov claimed Western threats against Moscow would only heighten tensions over the situation.

“Ideological approaches, ultimatums, threats — this is the road to nowhere,” Lavrov said, adding, “we can only normalize relations through mutually respectful dialogue.”

Speaking to the BBC ahead of his trip, Wallace warned that the Kremlin’s actions were heading in the wrong direction in spite of efforts to find a diplomatic solution.

“Despite the talking, the direction of travel is in the wrong way,” Wallace told BBC Radio. “The Russians are still growing their battalion tactical groups … They are planning to start a nuclear strategic exercise soon, and indeed we see more activity elsewhere.”

He said Britain had seen intelligence that Moscow was engaging in plans for so-called “false flag” operations as a pretext for invading Ukraine, as well as carrying out cyberattacks and other destabilizing activity.

Amid Europe-wide diplomatic efforts, German Chancellor Olaf Scholz met the leaders of the Baltic countries — all three of whom are former Soviet republics — in Berlin on February 10. Scholz will also travel to Kyiv and Moscow on February 14-15.

Scholz assured the Baltic NATO partners — Estonia, Latvia, and Lithuania — of support during the Berlin meeting.

“We are united and determined,” Scholz said. “We take the concerns of our allies very seriously. We stand at your side. This is very important to me.”

In Kyiv, Ukrainian President Volodymyr Zelenskiy said the joint Russia-Belarus drills, which Ukraine and the West have interpreted as part of Moscow’s military escalation in the region, amount to “psychological pressure,” as Ukraine also began its own scheduled military exercises on February 10.

Kyiv has not reported the number of military personnel and weapons involved in its exercises. Foreign Minister Dmytro Kuleba said on February 10 that Ukraine was also preparing a response to Russian Navy drills in the Black Sea.

Russia on February 8 said six warships were heading to the Black Sea from the Mediterranean for naval drills in what it said was a preplanned movement of military resources.

Zelenskiy said the diplomatic talks could pave the way for a summit with the leaders of Ukraine, Russia, France, and Germany aimed at reviving the stalled peace plan for the conflict in eastern Ukraine.

The multipronged diplomatic efforts come after French President Emmanuel Macron earlier in the week completed a round of shuttle diplomacy that saw him hold separate talks with both the Russian and Ukrainian presidents.

U.S. officials say Russia has increased its deployment to some 110,000 troops near the border with Ukraine and is on track to amass a large enough force — some 150,000 soldiers — for a full-scale invasion by the middle of the month.

Moscow insists it has no plans to attack Ukraine but has continued to make provocative military moves while also demanding guarantees from the West that NATO will not accept Ukraine and other former Soviet states as members, that it halt weapon deployments there, and also roll back its forces from Eastern Europe.

Both Washington and NATO have rejected these demands as nonstarters.

Meanwhile, the first U.S. troops meant to shield Eastern Europe from a potential spillover of the Ukrainian crisis arrived in Romania from Germany over the past two days, Romania’s Defense Ministry said on February 9.

And in Denmark, the prime minister said the NATO member was ready to allow the U.S. military to base troops on its soil as part of a bilateral defense agreement.

“The United States have reached out to Denmark, proposing a bilateral defense cooperation,” Mette Frederiksen told reporters on February 10.

“The exact nature of this collaboration has not yet been defined, but it could include the presence of U.S. troops, materiel, and military equipment on Danish soil,” she said.

The U.S. State Department said it welcomed Frederiksen’s remarks and said an agreement, when concluded, “will allow our countries to deepen our close partnership” and “strengthen cooperation in NATO operations.”