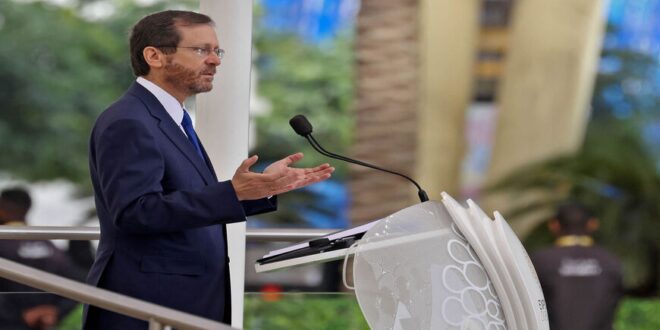 Jerusalem is well aware that Turkish President Recep Tayyip Erdogan has a long list of own interests behind his rapprochement campaign.

Israeli diplomats are dubious but pleased at the burgeoning romance between Turkish President Recep Tayyip Erdogan and Israeli President Isaac Herzog. Erdogan is not very popular in Israel, to put it mildly, while Herzog in his first seven months in office is shaping up as an active, influential, moderating and popular figure, venturing out of the confines of his largely ceremonial post. “With Erdogan, it’s all about interests,” a top Israeli diplomatic source in Jerusalem told Al-Monitor on condition of anonymity. “With Herzog, it’s his nature. He is like that, a kind of new [late President Shimon] Peres, an inveterate optimist who will always turn risk into opportunity, an enemy into a friend. He simply wants to be influential.”

The relationship between the two men reached a new level this week when Herzog called Erdogan Feb. 6 to wish him a speedy recovery from the omicron variant of the coronavirus he had contracted. “Next thing you know, they will go on a date,” a senior Israeli security source said with a smile while speaking on condition of anonymity. The two have been phone pals for some months, but the watershed moment in their relations occurred last November, when Erdogan ordered the release of the Israeli couple Natali and Mordi Oknin detained while touring Istanbul and accused of spying. Herzog obviously called to thank him — as did Prime Minister Naftali Bennett and Foreign Minister Yair Lapid.

At that point, Herzog had already been recommending to senior Israeli decision-makers that they pay attention to Erdogan, taking advantage of his growing influence with Bennett, Lapid, Defense Minister Benny Gantz and others. Bennett consults him frequently. In fact, despite his boyish looks, Herzog has become a modern version of the village elder, the responsible, experienced adult in the fractious Israeli political and public arena.

The overtures to Herzog, initiated by the Turkish leader, have spurred a rapprochement between Israel’s Mossad and Shin Bet foreign and domestic security agencies and Turkish intelligence services, as well as the respective foreign ministries and defense ministries, with Gantz leading the way. On Feb. 11, Turkish media reported that Turkey’s national intelligence organization, MIT, had thwarted an Iranian assassination attempt targeting an Israeli businessman named Yair Geller. According to the reports, the assassination was meant to avenge the November 2020 assassination of Mohsen Fakhrizadeh, head of the Iranian nuclear program, attributed to Israel.

For years, Turkey was one of Israel’s most important strategic allies in the Middle East. Those days are long gone and will probably not return as long as Erdogan remains in power. But events of recent months can certainly be described as a “mini-golden age” between the two states driven by interests rather than a desire to rekindle young love after a stormy decade.

“We realize that Erdogan has not changed. He does not like us, perhaps the opposite in fact, and he could turn against us at any given moment,” a high-ranking Israeli diplomatic source told Al-Monitor on condition of anonymity. “He is a leader of the Muslim Brotherhood, quite a few people consider him an anti-Semite, but he is a sober leader. He is currently experiencing serious troubles on many fronts, he is nearing elections, and he desperately needs firm alliances, in general, and good ties with Israel in particular. We have no objection,” the source said. “But we are being careful.”

Gas is a prime motivation fueling the improving ties. Israel has become a natural gas power in recent years and currently supplies large amounts of it to Jordan, Egypt and possibly Lebanon — yes, yes — through a third party. Israel is the leading partner in the Cairo-based Eastern Mediterranean Gas Forum, which also includes Greece and Cyprus, Israel’s key partners in the Mediterranean Basin. There was also talk of an EastMed pipeline that would pump gas to Cyprus, the Balkans and from there to Europe, although prospects of the project seem for the moment to be negligible. Turkey has not been invited into this intimate circle, and an insulted and insulated Erdogan has been acting like the proverbial spoilt kid trying to wreck the party.

The gas issue is complex. The United States supports Israeli natural gas supplies to Turkey because they would limit Turkey’s energy dependence on Russia. But as of now, Erdogan risks becoming one of the main losers in the near-war between Russia and Ukraine. He will have to pick sides. His great dependence on Russian President Vladimir Putin has been a painful thorn in his side of which he would be happy to be rid. He wants Israeli gas through a direct pipeline, which he would gladly extend to Europe. He is less enamored of the proposed pipeline between Israel and Greece, leading to Europe. The Greeks and Cypriots, for their part, are hardly keen on the budding romance between Jerusalem and Ankara.

News emerging in recent weeks of a possible Herzog visit to Turkey generated grave concern in Athens and prompted a decision that the Israeli leader would visit Greece beforehand, this month. Israel is making clear that Athens comes first, but also signaling that there is room for everyone under its foreign policy umbrella.

Greece’s Minister of Defense Nikolaos Panagiotopoulos visited Israel Jan. 20, and his counterpart Gantz has scheduled an upcoming reciprocal visit to Athens — no date was published yet — as Israel seeks to demonstrate that the Hellenic alliance with Greece and Cyprus is strong and flourishing, with all due respect to Erdogan. “The Greeks are uneasy about the rapprochement between Israel and Turkey,” the senior Israeli security source said. “But we have been reassuring them. This strategic alliance is not under any threat.”

That being said, all indications from Ankara point to a substantive shift — albeit not a strategic one — in Turkey’s attitude to Israel. “This is reflected in indications from the Mossad and in various areas of security,” the source noted. “The Turks have been very cooperative on security matters recently. In a very uncharacteristic way, they actually did some concrete things we asked of them.” In this context, we should remember Israel’s repeated demand that Turkey curb the increased presence of Hamas on its territory.

And yet, with the hindsight of bitter experience, Israel remains skeptical about Erdogan’s intentions. Bennett’s approach is pragmatic, arguing that just like Erdogan, Israel looks out primarily for its own interests and has even been known to do business with anti-Semites if it serves them. Israel has no illusions about the Islamist president, but welcomes any peace or business overtures.

An Israeli security expert monitoring developments pointed to what he described as a strange phenomenon in the Middle East. He said, “All the actors are trying to be in touch with as many other actors as possible, everyone is reaching out to everyone else and trying to play in every arena.” The source, speaking on condition of anonymity, said many states in the region were adopting what he dubbed the “Qatar method” typical of regions in a state of uncertainty as the Middle East is these days. The Americans are pulling out, the Russians are undecided about the extent and depth of their engagement, “the uncertainty is growing and everyone wants to be squared away with everyone else,” the analyst said. The United Arab Emirates is an example of this attitude, putting its eggs in various baskets, consistently warming relations with Iran despite the attacks on its territory by Iran-backed Houthi rebels. Erdogan appears no different in this sense.

And a final inescapable mention of Iran. Erdogan, like Israel, has serious concerns about Iran. As a devout Sunni Muslim, he would not welcome a nuclear capable Shiite Islamic Republic on his border, and he is at loggerheads with Tehran over Syria. Israel and Turkey share more strategic interests than it would appear at first glance. Trade relations between them are significant and flourishing. “Clearly, the closer he gets to elections, the further away he will move from us,” the senior Israeli diplomatic source said of Erdogan. “That’s just the way he is, and when that happens, we will know what to do. We have experience.”