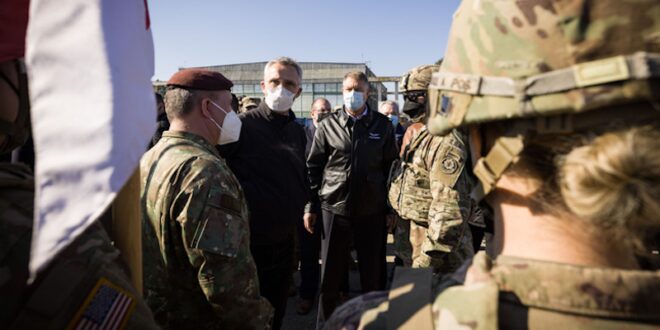 On Friday (11 February), NATO Secretary General Jens Stoltenberg visited the Mihail Kogălniceanu Military Base (MK) in Romania to greet Allied deployments to the security of Romania and the Black Sea Region.

In a joint press conference with the President of Romania Klaus Iohannis, the Secretary General thanked Romania for its significant contributions to the Alliance.

He praised contributions from Germany, Italy and Spain to help secure the airspace over the Black Sea region and welcomed the rapid deployment of one thousand additional troops from the United States, currently ongoing, which will bring the total of US service members operating from MK airbase to almost two thousands.

“This is a powerful demonstration of transatlantic unity”, the Secretary General said, underlining “North America’s ironclad commitment to the defence of Europe”. In recent days, NATO Allies have made announcements to deploy additional forces and assets to the eastern flank of the Alliance, from the Baltic to the Black Sea region. Mr Stoltenberg said that at their meeting next week, NATO Defence Ministers will discuss how to further strengthen NATO’s presence, including with new battlegroups. In this regard, the Secretary General welcomed France’s offer to lead a multinational battlegroup in Romania.

With three Allies bordering the Black Sea, as well partners Ukraine and Georgia, security in the region is of “vital strategic importance” to NATO, the Secretary General said.

This one-day visit comes in the midst of worrying Russian military build-up along the borders of the Alliance. The Secretary General reiterated the Alliance’s support for dialogue and its invitation to Russia to meet again in the NATO-Russia Council. He, however, insisted that NATO would not compromise on the core principles of national sovereignty and NATO’s ability to protect all Allies: “there will never be first class and second class Allies in NATO”, he said, “there are only NATO Allies. United as one.”

Post Views: 102
Previous The US Is Facing A Sputnik Moment In The International Economy – Analysis
Next Dbeibah Trying To Take Libya By Force: What Will Happen Next?