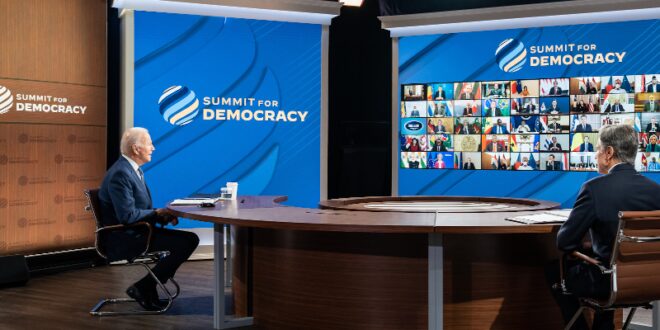 Undemocratic Goals Of The Summit For Democracy

The US-sponsored virtual summit for democracy on December 9 and 10 was an unprecedented event; a show of American innocence and righteousness. The conference, which selectively and unjustifiably invited the leaders of 100 countries, supposedly was to focus on fighting corruption, defending human rights, and confronting authoritarian regimes. But the main target of the conference was first China and then Russia. Thirty percent of the leaders invited to the conference, according to the Freedom House, are either not free at all or have little freedom.

The examples of Iraq, Afghanistan, and Libya have shown that selective democratization of the world by force of arms through fighter jets and invasion is not achievable. Joe Biden must now realize that he can not democratize by media and propaganda either. The world cannot be divided into friend and foe because many countries do not really want to be part of a particular geopolitical bloc. There are countries in Africa and Asia that want to maintain their relative independence, establish a balance and neutrality among the great powers, and interact with each in accordance with their own culture and traditions. This feature is institutionalized in human nature and consequently in the identity of different societies; therefore, everything else is itself against human rights and denies human nature and the identity of world societies.

The bizarre list of leaders invited to the democracy summit has taken Western democracies, especially Europeans, by surprise to the extent that they have repeatedly criticized and even ridiculed it. In this list, the so-called pro-democracy, obedient armies of the United States seem to want to line up against authoritarian regimes. Leaders like the infamous President Bolsonaro and Trump’s companion, Duterte, the ruthless dictator of the Philippines, authoritarian extremist nationalists like Indian Prime Minister Modi, or representatives of dark democracies like Angola, the Democratic Republic of the Congo, Iraq and the like. A country like Bangladesh, which has long developed a parliamentary democracy, is not considered a democracy due to its strategic and decisive proximity to China in the Indo-Pacific region.

Despite the fact that four million Americans are of Hungarian descent, Viktor Orbán, the President of Hungry, was not invited to the conference. However, the President of Poland, a close ally of the United States in Eastern Europe who has allowed the United States to use his country’s land to confront Russia, was invited to the conference. Poland is undermining the independence of the judiciary and the freedom of the press, despite repeated protests by the European Union.

The Chinese reaction to this unusual conference was so negative that, their media asserted that thirty years after the end of the Cold War the United States was looking for another Cold War and wanted to divide the world to “we” and “others.” Beijing believes that the goal of the conference was not to strengthen democracy, but to ensure US supremacy around the world.

Of course, the Chinese took the initiative two years ago, defining their own definition of democracy, and at the same time as the US held democracy summit, Chinese President Xi Jinping officially released a book entitled whole-process people’s democracy.

Post Views: 170
Previous Will Iran Strike At Global Oil Supply If Russia Invades Ukraine?
Next The Battle For Sovereignty And Survival In Ukraine