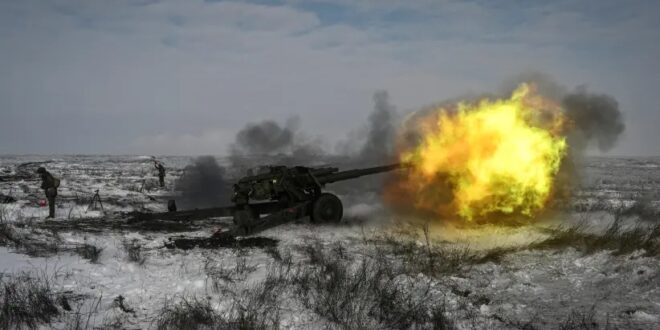 What can the IDF learn from the Russia-Ukraine crisis?

The IDF will watch and learn from the equipment and methods used by Russia and Ukraine if war breaks out.

It’s the war that the entire world is trying to avoid. A war between Russia and Ukraine would be costly, both in terms of human life and the economy of the two states. But, if push comes to shove, what would such a war look like – and what would Israel be watching?

With many countries, Israel included, pulling out diplomatic and military staff and calling on citizens to immediately leave Ukraine, the alarm bells are ringing that war might be just around the corner.

Like the rest of the world, Israel’s defense establishment is closely following what is happening and trying to work out what, if anything, it might mean for the Jewish state and its military.

Dr. Eitan Shamir, BESA Center for Strategic Studies Director at Bar Ilan University said that the IDF will watch and learn from what could happen should Moscow invade its neighbor – especially how Russia will integrate all its different tools including information warfare and sabotage.

“And how do you integrate all of this into a more physical attack? What means? What ways? What targets could be selected?” he asked. “We will watch all of this and learn from it.”

Another important aspect that the Israeli military will be watching will be the use of heavy ground power versus air power, a point of debate within the IDF since the 1990s.

Jerusalem has been investing in “the emergence of technologies like precision munitions that can be fired from standoff ranges and not risking any troops,” Shamir explained, but “we saw that those aren’t decisive and didn’t stop the enemy in 2006” when Israel last fought Hezbollah.

“The IDF says it is committed to ground forces, but it is investing more and more in stand-off fire – and you can see how the IDF has dismantled the heavy armored brigades,” Shamir said. “But now we see that the Russians are using a massive amount of tanks, armored fighting vehicles and artillery. This is what they are going to use to invade Ukraine.”

IN ADDITION to watching Russia, Israel’s military will be keeping an eye on how Ukraine defends itself against a superpower’s military. Russia has one of the most powerful militaries in the world, spending $61.7 billion on it in 2020. In addition to the 100,000 troops deployed to Ukraine’s borders, it has also deployed Iskander short-range ballistic missile systems, tanks and artillery.

While most of Kyiv’s military is based on antiquated Soviet systems, it has received new equipment from the West including Javelin anti-tank missiles, Stinger anti-aircraft missiles and Turkish-made Bayrakhtar drones. Ukrainian troops have also received training from the West in recent years.

“The IDF will look at the performance of certain systems against the other,” Shamir said, adding that Israel will also look at the entire structure of the Russian military, “which is tightly integrated with heavy firepower in the brigade and battalion level.”

But, should war break out, the Russians won’t be able to occupy and control Ukraine. What might start out as state versus state might very quickly degrade to guerrilla warfare or a counter-insurgency campaign.

“They have 150,000 soldiers but it’s not enough to control a country as big as Ukraine. So they can invade, encircle Kyiv [and] take parts of the country, but they will suffer casualties and that is something they are very sensitive about,” Shamir said. “If they don’t get what they want quickly they will face an insurgency, and I’m not sure they can control and handle it; they will have to triple their forces.”

“The Russians want a puppet government in Kyiv, but there are enough people in Ukraine who will not be willing to give up,” he said. “The Russians will have a problem if they invade and get stuck there, just like they did in Afghanistan.”

Israel will also watch the reaction of the West, including its main ally the United States. Although the Americans, Europe and NATO will threaten to impose severe sanctions on Russia, it is unlikely that they will interfere militarily.

“They will do everything to signal to Putin that Ukraine is a redline,” Shamir said. “They will protest, place sanctions, beef up forces in other countries but they will not intervene. They will not open up a third world war for Ukraine: They will stand on the side and watch.”

Despite US intelligence warning that Russia could start its campaign at any moment, Ukraine’s President Volodymyr Zelensky has criticized the “panic” by Western countries, saying that he’s seen no proof that Moscow is planning an invasion.

So is Russia just holding war games with Belarus? Is Putin testing US President Joe Biden? Or will he invade? What is the game plan?

“You can think of different scenarios but everything can happen,” Shamir warned. “That’s the problem with wars – they are uncontrollable events. Cautious leaders try to avoid them because while you know how you get into one, you can never be sure how to get out.”