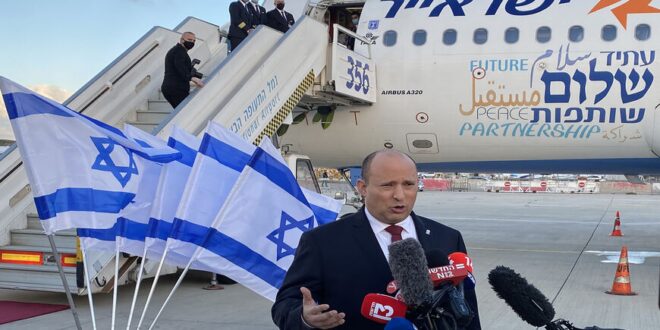 Israel’s Bennett in Bahrain to warn against Iran

During a first, historic visit, Prime Minister Naftali Bennett emphasizes that Israel and Bahrain share similar interests in constructing regional cooperation and in battling against Iran.

On Feb. 14, the day Prime Minister Naftali Bennett left for Manama on the first ever visit by an Israeli leader to Bahrain, Egyptian President Abdel Fattah al-Sisi hosted a conference of the Eastern Mediterranean Gas Forum in Cairo. Hours before Bennett landed in Bahrain, a short video clip from the Cairo conference’s opening ceremony went viral on social media. It showed the Egyptian president entering the packed hall to a standing ovation by the government ministers and energy executives from around the Middle East and the Arab world, taking his front-row seat, welcoming the guests and then surprising the audience by leaving his seat to walk across the hall toward a woman seated in a wheelchair. Sisi approached her, bowed, exchanged a few words and placed his hand on his heart to signal his sincerity. The woman was Karine Elharrar, Israel’s minister of national infrastructure, energy and water resources.

The head of Elharrar’s Yesh Atid party, Foreign Minister Yair Lapid, recounted later that he had been moved to tears at the rare gesture by an Egyptian president toward an Israeli politician. Over the 43 years of formal peace with Israel, Egyptian leaders have generally downplayed meetings with senior Israeli politicians due to persistent widespread public opposition to these ties. Things have changed since Israel’s new government took office in June 2021. Nowadays, as illustrated by the video clip, not only are the Egyptians no longer hiding their contacts with Israel, they are proudly showcasing them for the world to see.

Bennett, whom Sisi hosted in Egypt last September, flew to Bahrain shortly after Defense Minister Benny Gantz paid a visit to the Persian Gulf kingdom Feb. 3. Lapid was in fact the first Israeli senior official to visit the country, traveling to Manama at the end of September 2021. While visiting Manama, Lapid, Gantz and now also Bennett, were each given a tour of the US Navy’s Fifth Fleet headquarters in Bahrain, accompanied by US Naval Forces Central Command Commander Vice Adm. Brad Cooper.

In Gantz’s case, the tour took place even as Israeli vessels were taking part in a major international naval drill alongside boats from Egypt and other Arab countries. In Bennett’s case, the visit of an Israeli prime minister at the American navy base in Bahrain sends an even stronger signal to Iran and to its proxies, taking a global view of things, the drill, the back-to-back top-level Israeli visits and the security agreement signed between the two countries during Gantz’s visit, are all meant to serve as a clear warning to Tehran.

“You [Iranians and proxies] are aligning around Israel’s borders,” a senior Israeli security official told Al-Monitor, speaking on condition of anonymity. “But we are also setting up along your borders.”

In an interview with Bahrain’s Alayam newspaper to mark his visit, Bennett accused Iran of destabilizing the entire region. “Iran supports terrorist organizations that operate in your region and our region in order to achieve one goal, which is to destroy moderate countries that care about the welfare of their people … and install blood-thirsty terrorist organizations in their place. We will not allow that. We are fighting Iran and its henchmen in the region day and night and we will help our friends in promoting peace, security and stability, whenever we are asked.”

Bennett’s policy seeks to change the rules of the game regarding Israel’s conflict with Iran. “Until now, this was what is usually termed an asymmetric conflict,” the senior Israeli security official explained. “The Iranians lined up along Israel’s borders through their various proxies, the most prominent among them being Hezbollah and obviously the Shiite militias in Syria and even Sunni Gaza terrorist organizations such as Hamas and Islamic Jihad. Israel clashes constantly with these Iranian messengers while Tehran remains immune. This will no longer be the case. Tehran is no longer immune, and we are also advancing toward it on all fronts and with all our might.”

A diplomatic source in Jerusalem told Al-Monitor on condition of anonymity that unlike the United Arab Emirates (UAE), Bahrain is “not wealthy, is not an economic power, but it is very close to Iran and very worried about it.” Accordingly, he noted, Israel’s relations with Bahrain are very different than with the UAE and mostly security-related in nature. Unlike the Emirates, which is playing across the board, maintaining ties with Iran and at the same time engaged in a tango with the West, Bahrain views Iran as a dangerous enemy, the official explained. In fact, he added, “[Iran] doesn’t even consider Bahrain an independent state.”

Israel is being sucked into this volatile arena, telling the Iranians that just as they have opened up a front vis-a-vis Israel in Syria, Israel can “open up a front against you in your closest backyard,” a top Israeli defense source said, speaking on condition of anonymity. Bahrain’s location, and the presence of the US naval force anchored there, is particularly crucial for Tehran. “They know their oil shipping lanes can be crippled and their economy would suffer a fatal blow,” he added. “They realize the rules have changed.”

The Bahrainis are according to Bennett today a welcome fit for kings, just as they did with Gantz and Lapid, including a meeting with the king, the crown prince, the foreign and defense ministers and other Cabinet members. The visit’s agenda comprises economic issues, including efforts to overcome disagreements over a proposed tax treaty between the two states. Bennett prides himself on being able to cut through bureaucratic red tape and is likely to resolve the problem during his brief visit. But the real agenda focused on Iran. Unlike senior-level Israeli visits to the UAE, where the name “Iran” was only mentioned behind closed doors and was conspicuously absent from media briefings, with the consent of both sides, Iran figured openly and prominently in the Israeli visits to Bahrain.

Bahrain is fearfully watching the recent missile and drone attacks on the UAE by Iran-backed Houthi rebels from Yemen. Manama does not want to be next in line. Judging by first reports, Bennett’s talks presumably raised the issue discussed there previously by Gantz, namely wide-ranging Israeli security assistance, mainly in locating and intercepting aerial threats such as missiles, rockets and exploding unmanned aerial vehicles.

Bahrain, the Israeli senior defense source explained, is heavily reliant on the United States. While the Fifth Fleet is staying put, the United States is pulling out of other parts of the region and “Israel is getting ready to go in instead.” The biblical Prophet Isaiah described the End of Days as an idyllic time when many nations will recognize the god of the Israelites and peace will prevail throughout. Israeli peace with the Arab world is still patchy, but the recent developments in Israel’s relations with Egypt, Morocco, Bahrain and the Emirates could be already considered a fantastic and unexpected realization of that biblical prophecy.