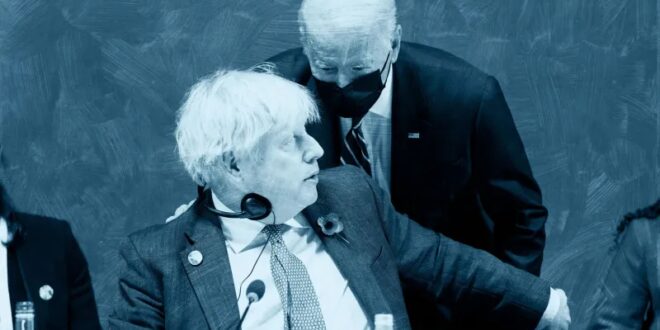 The Myth of Global Britain

Joe Biden and Boris Johnson make an odd couple. Whereas Donald Trump and the British prime minister shared a populist flair and became pals across the pond, “Middle-Class Joe” and the scandal-plagued Etonian cut a more awkward pair. The two leaders have faced similar domestic challenges over the last year, including deep political and social divisions and a resurgent pandemic, but they have found themselves at odds over the consequences of Brexit and the aftershocks of Trump’s foreign policy. The absence of any deep affinity between their senior teams has not helped, either.

Lesser partnerships might have suffered irreparable damage. But in the United Kingdom, pragmatism prevailed, as it nearly always does. Through sheer determination, Johnson has forged a strong partnership with his unlikely opposite number in the United States and largely aligned his foreign policy with Biden’s. Although tensions over Northern Ireland persist, the prospects for a U.S.-British trade deal are stalled, and the two countries have diverged on free trade in general, Johnson has mostly embraced Washington’s larger objectives vis-à-vis China and Russia. In the current standoff with Russia over Ukraine, the United Kingdom’s emphasis on deterrence stands in stark contrast to France’s impulse to negotiate and Germany’s ambivalence. There is no doubt which of these powers is Washington’s closest European security partner.

The paradox, of course, is that Johnson has spent most of the last two and a half years crowing about “global Britain” and its newly independent foreign policy. For this reason, his government’s rhetoric (and conspicuous silence on certain matters) is still out of sync with reality. In an address to the Conservative Party Conference, for instance, British Foreign Secretary Liz Truss said the United Kingdom’s relationship with the United States was “special but not exclusive,” and in a major foreign policy speech at Chatham House, Truss said virtually nothing about the United States. But the reality is that for all Johnson’s bluster about global Britain, Brexit has only increased the United Kingdom’s dependence on the United States.

Still, neither Washington nor London should take their historic partnership for granted. Despite decades of shared interests and a common worldview built on deeply held liberal values, the United Kingdom and the United States have lately been distracted by domestic turmoil and international crises and needed daily diplomacy to keep their relationship on track. Both countries should therefore recommit to strengthening their partnership, building on the momentum of last year’s G-7 summit in the United Kingdom, where Biden and Johnson signed a new Atlantic Charter setting out their joint ambitions. That, in turn, will require the United Kingdom and the United States to fortify their democracies and build unity at home. Doing so will not only guard against external interference by autocratic powers but also help restore the symbolic power of liberal democracy around the world.

Trump’s preference for Brexit meant that Washington dangled the idea of a trade deal, at least for a time. But the negotiations that led to the 2020 EU-UK Trade and Cooperation Agreement, which now forms the basis of the United Kingdom’s relationship with the European Union, dominated British politics for more than four years. For its part, the United States was also consumed by its domestic affairs, first because of Trump’s various scandals and then because of COVID-19. Trump also spent four years fomenting opposition to free trade, helping to entrench a deep skepticism toward free trade in Congress. Johnson’s final effort to forge a deal with the EU before its scheduled departure from the bloc’s single market and customs union took place just after the 2020 U.S. presidential election, as Republican leaders across the United States launched a series of legal challenges seeking to overturn the results. Days later, an insurrection erupted at the U.S. Capitol as rioters sought to prevent Congress from certifying Biden’s victory.

Johnson has forged a strong partnership with his unlikely opposite number in the United States.
Throughout the U.S. election season, the United Kingdom’s singular focus on Brexit warped the judgment of some of its most senior officials. Even after three years of Trump assaulting the fabric of the international order that Britain had co-founded—and for seven decades, defended—the prospect of another four years of Trump did little to unite Johnson’s team against it. Instead, his advisers were divided on the prospect of a Biden presidency. Some feared that a Biden administration would distance itself from the United Kingdom, draw closer to the European Union and especially Germany, and that Brexit would spell the end of a quick U.S.-British free trade deal. This fear appeared to outweigh concern that a second Trump term might carry grave consequences for the fate of American democracy or the international order.

FALLING INTO LINE
One year into Biden’s presidency, Johnson still has not gotten his trade deal, and unresolved questions about the future of Northern Ireland have fueled instability in British relations not just with Europe but also with the United States. Johnson’s inability to resolve the uncertainty over the Irish border, moreover, has contributed to an atmosphere of mistrust between him and an Irish Catholic U.S. president who is deeply committed to the 1998 Good Friday Agreement that ended decades of violence in Northern Ireland.

Despite these lingering areas of mistrust, however, the Johnson administration has used its new independence from Europe to align its foreign policy with that of the Biden administration. In a speech at the Munich Security Conference in February 2021, Johnson stressed the importance of the United Kingdom’s security partnerships and announced a $22 billion increase in British defense spending over the next four years. It was welcome news in Washington but received little attention at home.

A few months later, Johnson’s government published a strategy document that spelled out a foreign policy agenda that is closely aligned with the Biden administration’s approach, emphasizing science, liberal-democratic values, and crucially, a greater strategic focus on the Indo-Pacific. The two countries are not perfectly aligned, however. The United Kingdom aims to join a transpacific trade deal that Washington has shunned, and it is already part of the Asia Infrastructure Investment Bank, another regional institution that the United States chose not to join. The United Kingdom is also not part of the Quad, the United States’ partnership with Australia, India, and Japan that aims to shape the future of a region increasingly dominated by China. But London and Washington took another important step toward synchronizing their objectives in Asia in September when they announced the AUKUS partnership, a trilateral security and defense partnership among Australia, the United Kingdom, and the United States that will allow for greater cooperation on cyber-capabilities, artificial intelligence, and quantum technologies and enable Australia to acquire a fleet of nuclear-powered submarines. By falling in line with the U.S. position on China, the United Kingdom has distinguished itself from the EU, which has been slower to demonstrate a common policy toward China or to clearly align its China policy with the United States.

Johnson has used his new independence from Europe to align his foreign policy with that of the Biden administration.
The United Kingdom has also embraced the United States’ return to multilateralism, taking advantage of its presidency of the G-7 and role as co-chair of the 2021 UN Climate Summit in Glasgow to distinguish itself as an international leader in something approaching an equal partnership with the United States. Both London and Washington have also reaffirmed their commitment to protecting democracy around the world. In her speech to the Conservative Party Conference, Truss announced the United Kingdom’s commitment to support a “network of liberty,” a concept that mirrors Biden’s push to aid global democracy in its contest with authoritarianism.

But the veneer of equality between the two partners became harder to sustain after the United States withdrew from Afghanistan in August 2021. The overwhelming feeling across the British foreign policy establishment was that the United States showed little regard for the interests of its closest European security partner in winding down a shared 20-year war. Any claim to an independent British foreign policy was dashed as Johnson was forced to go along, weathering the domestic political backlash that the chaotic withdrawal sparked at home.

Johnson’s efforts to align with Washington’s strategic priorities have divided opinion among Britain’s foreign policy establishment, and for good reason. The United Kingdom’s ability to sustain a meaningful role as a security provider in the Indo-Pacific—one that is consequential enough to matter for the United States—is limited, and attempting to do so risks diluting its role as the leading contributor to Euro-Atlantic security. And while AUKUS has bolstered Johnson’s image of a global Britain and diverted attention away from the fallout surrounding the withdrawal from Afghanistan, the rollout of the partnership was so badly handled that it put the United Kingdom sharply at odds with France, its closest European security partner.

HARD WORK AT HOME
The shadow of Brexit still looms over the U.S.-British relationship, but despite the mismatch between the respective occupants of the White House and 10 Downing Street, the historic partnership looks surprisingly robust. Unlike its continental European counterparts, which are talking about the need for strategic autonomy in case a Trumpist president returns to Washington, the United Kingdom has sought closer foreign policy alignment with the United States.

The United Kingdom has been too wrapped up in its own domestic politics to take the threat of internal political instability in the United States very seriously. Its foreign policy strategists, previously consumed by the imperative to define a new global role for the country, are now preoccupied with a major security crisis closer to home—one that has drawn Washington’s focus back to Europe. For all of these reasons, London has not dwelled on the risk that the United States might one day prove too weak at home to lead abroad or that it might radically rethink its commitment to European security. Johnson’s rapidly weakening domestic position, brought on by revelations of parties in Whitehall and Downing Street during COVID-19 lockdowns, have made it even less likely that his government will rethink its alignment with Washington.

Ultimately, though, it will be hard to sustain a strong U.S.-British relationship unless both partners fix their democracies. Liberal democracy remains the best anchor for the U.S.-British partnership. Fortifying it will require bridging internal divisions, tackling inequality, ensuring the resilience of democratic institutions and civil society, and addressing the pernicious effects of disinformation, fake news, and entrenched partisan narratives.

The United Kingdom and the United States should also celebrate their shared history of diversity and harness it to reimagine a U.S.-British partnership that symbolizes a commitment to tolerance, pluralism, and diversity. This foundation can undergird an intelligent internationalism based on shared national interests and equipped for the twenty-first century. In a world defined by intense rivalry between powerful countries that are fundamentally at odds over even the most basic values, a historic partnership between two liberal democracies should be carefully guarded.

Post Views: 205
Previous To Reveal, Or Not to Reveal
Next US moves embassy from Ukraine’s capital Kiev to the western city of Lviv