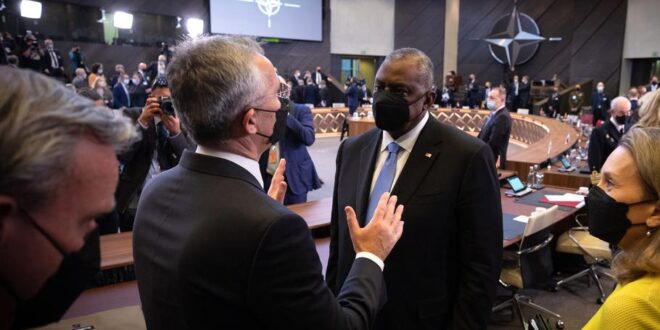 US and NATO deem Russia a persistent threat to Europe, will add battlegroups in response

NATO military commanders will draw up plans for the creation of allied battlegroups in central and southeastern Europe, in response to the “new normal” of a persistent Russian threat to the Continent, the alliance’s top official said Wednesday.

Secretary-General Jens Stoltenberg said there is no evidence that Moscow has begun pulling forces away from Ukraine’s border, despite Russian claims to the contrary earlier in the week.

“So far, there is no de-escalation,” he said from alliance headquarters in Brussels.

Instead, there are signs that Russia has increased forces around Ukraine and that “more troops are on their way,” Stoltenberg said.

On Wednesday, NATO defense ministers, including U.S. Defense Secretary Lloyd Austin, took part in an opening round of talks in Brussels. Russia and its military buildup around Ukraine dominated the agenda.

In a joint statement, they said Russia’s actions pose a “serious threat to Euro-Atlantic security.”

“We are prepared to further strengthen our defensive and deterrent posture to respond to all contingencies,” the ministers said.

NATO members plan to set up multinational battlegroups in Romania and other countries, Stoltenberg said.

“We don’t know what will happen to Ukraine, but the situation has already demonstrated we face a crisis in European security … I regret to say this is the new normal in Europe,” Stoltenberg said.

While Stoltenberg did not detail which countries are being considered for the new battlegroups, he did say France has volunteered to lead a force in Romania. He added that commanders will start working on the details and report back within weeks.

Stoltenberg said the new battlegroups could resemble ones in the Baltic states and Poland that were created after Russia’s initial invasion of Ukraine in 2014.

One of Russia’s complaints, which it has used to justify its placement of 130,000 troops near the borders of Ukraine, is the alliance’s expansion east after the Cold War.

In particular, Russia is upset about Ukraine’s aspirations for NATO membership, which comes with a guarantee that an attack on one member requires all the others to collectively assist in defending the attacked country.

But German Chancellor Olaf Scholz, during stops earlier in the week in Ukraine and Russia, said Ukraine’s NATO membership ambitions are not on the alliance’s agenda now or for the foreseeable future.

Still, Stoltenberg said that NATO’s open-door policy remains intact and that when it comes to admitting new countries, it’s a matter for the 30 members to decide.

“Russia is not deciding who’s going to be a member of NATO or not,” he said. “And this is a matter of principle that all allies have stated clearly again and again.”