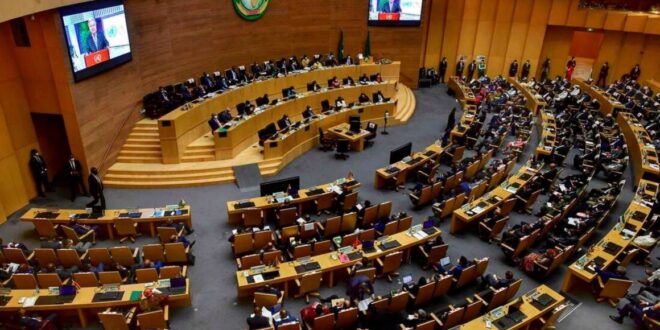 40 African heads of state head to Brussels for EU Summit

At least 40 heads of state and government are expected in the Belgian capital Brussels for a Summit with the European Union, officials said on Wednesday ahead of the crucial inter-bloc meeting.

The attendance list on Wednesday indicates more African heads of state will gather in Europe for the meeting than the number that attended the AU General Assembly in Addis Ababa last week.

The Burundian leader, for example, will be touring Brussels for the first time since the European Union lifted sanctions on his country earlier this month, having been imposed in 2016.

PM Abiy might come face to face with World Health Organization boss Tedros Adhanom, an Ethiopian national his country had accused of fuelling the Tigray conflict. Ethiopia had even withdrawn his nomination for a second term at the WHO.

This will be a first EU-AU Summit in four years. The meeting signals changing tides in relations, and also comes at a time the world is recovering from the Covid-19 pandemic, with Africa still lagging on vaccination rates.

Officials told journalists on Wednesday the meeting will touch on an investment package to address the urgent challenges of climate change and insufficient healthcare in Africa, as well as the unresolved issue of intellectual property rights for vaccine production in Africa.

“Our investment in Africa responds to demands and needs of our African partners,” said an official during a background virtual briefing to journalists on Wednesday.

“The EU is working on a comprehensive response, through the World Trade Organisation…but also the most important issue is the know-how of vaccine production,” he added.

As part of a wide-ranging package of financing, the officials said the EU is allocating up to $170 billion worth of funding for Africa to go into investments in transport, economic integration, green energy, healthcare and security programmes in the next two years.

The money will include funds for more vaccines for Africa, including 450 million doses of Covid-19 jabs.

The European Investment Bank announced a $70 million package it said will “tackle the impact of Covid-19 and unlock sustainable growth.”

The money will be channelled through the Bank’s new specialised arm of investment, EIB Global, to start-ups in Africa to help create jobs, according to Werner Hoyer, the President of the European Investment Bank.

However, there is always the issue of China in the background.

Part of this funding has been seen as a direct contest with China, whose funding of African infrastructure has remained supreme for the last few decades.

On Wednesday, officials said their money will come with requirements for transparency, accountability and respect for conservation.

But they did admit “we have got competition.”

Activists called for “fairness” in negotiating financing deals, warning the African continent that Covid-19 has posed unprecedented challenges, with countries diverting reserves, delaying repayments or borrowing to respond to the pandemic.

“This vicious cycle—debt leading to default leading to draconian cuts in public services leading to more debt—has laid bare the dysfunction and injustice of the current global financial architecture,” a briefing paper released by a group of activists said.

Part of the problem, according to Dr Chiek Tidiane Dieye, the founder and executive director of the African Centre for Trade, Integration and Development, is that the AU teams often lack a coherent set of minimum economic positions during negotiations.

Unlike the EU where the political project followed economic integration, the AfCFTA is coming more than half a century after the Organisation of African Union, the precursor to the AU, she noted.

He said he will push for greater access to Covid-19 vaccines and the reallocation of $100 billion in the International Monetary Fund Special Drawing Rights (SDRs) to Africa.

The SDRs were created by the IMF to supplement its member countries’ official reserves, enhance liquidity.

The AfDB is a prescribed holder of SDRs by the IMF and has been seen as a way to cushion countries whose revenues dried up during the pandemic.

Writing in a joint Op-Ed, African Union Chairperson Macky Sall (Senegal’s President), and Charles Michel, the President of the European Council, said the pandemic and other security threats mean the AU and the EU must be partners.

“In the face of this disturbing trend, we are convinced that Africa and Europe can work together to bring about a better and safer world for everyone, through dialogue and cooperation with respect for one another,” they observed on Monday.

It is in that spirit and with those goals that Africans and Europeans are rolling up our sleeves to work towards an exciting common future.