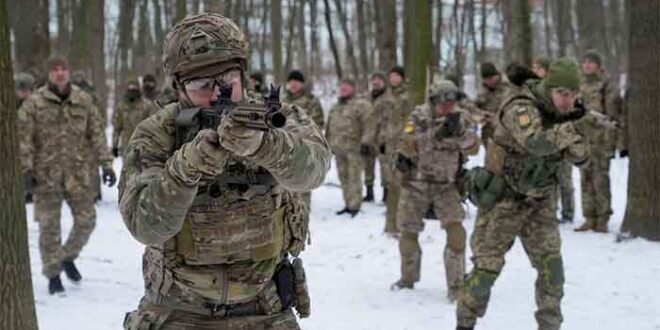 US, NATO double down on war threats against Russia over Ukraine

Events are exposing the threats and lies that the NATO powers are using to launch a war drive against Russia. Yesterday, the date US officials had said would see the beginning of Russia’s conquest of Ukraine, came and went without any Russian invasion whatsoever, and Russia in fact pulled back units deployed along its border with Ukraine for military exercises. US and NATO officials nevertheless stepped up military deployments to Eastern Europe and repeated their empty accusations that Russia is preparing to attack Ukraine.

Even as Moscow released videos of its tanks leaving Crimea and Belarus after these exercises, NATO Secretary-General Jens Stoltenberg again denounced Russia in a press conference opening the two-day NATO defense ministers conference that began yesterday in Brussels. On the Russian videos, he baldly claimed that “we have not seen any sign of de-escalation on the ground. Russia has amassed a fighting force in and around Ukraine, unprecedented since the Cold War. Everything is now in place for a new attack. But Russia still has time to step back from the brink.”

Stoltenberg thrust aside Moscow’s concerns that NATO could admit states on Russia’s borders, such as Ukraine or Georgia, and station offensive weapons there. “Every nation has the right to choose its own path,” he claimed, as NATO defense ministers prepared to meet the Ukrainian and Georgian defense ministers today. Stoltenberg also pledged to move ahead with plans to permanently station NATO battle groups in Eastern Europe and ensure NATO nuclear weapons are ready for use.

“We have deployed more troops, planes, and ships to the eastern part of the Alliance, increased the readiness of our NATO Response Force, and boosted our battle groups in the Baltic region,” he said, adding: “NATO defense ministers will address the need to further increase our defensive posture. And I welcome the offer by France to lead a new NATO battle group in Romania. Tomorrow, I will also chair a regular meeting of the Nuclear Planning Group, ensuring that our nuclear deterrent remains safe, secure, and effective.”

Stoltenberg echoed earlier remarks by US Secretary of State Antony Blinken. Without denying that Russian troops were leaving the border area, Blinken insisted that Washington had seen “no meaningful pullback” of Russian troops. “On the contrary, we continue to see forces, especially forces that would be in the vanguard of any renewed aggression against Ukraine, continuing to be at the border, to mass at the border,” he said, claiming that Russian President Vladimir Putin “could pull the trigger.”

This hysterical language aims to distract from the discrediting of NATO’s concocted anti-Russian narrative, which has no basis in fact whatsoever, and to justify a reckless military buildup.

NATO officials’ warnings of a Russian invasion were again directly contradicted by the pro-NATO government in Ukraine they are supposedly protecting from Russia. After Ukrainian President Volodymyr Zelensky has repeatedly stated publicly that Russia does not have sufficient troops in the area to invade Ukraine, Ukrainian military intelligence released its own formal assessment yesterday. It declared: “The Russian military contingent near the Ukrainian border is insufficient to carry out a successful large-scale armed aggression against Ukraine.”

Nonetheless, it is expected that NATO defense ministers will announce the permanent stationing of battle groups in Eastern Europe, either today at the summit in Brussels or at a NATO summit scheduled for this June, in Madrid. The battle groups would go to Bulgaria, Romania, Slovakia and Hungary, an anonymous NATO diplomat told Reuters Tuesday—thus completing a series of NATO deployments that ring the western borders of Russia and Ukraine with NATO bases and troops.

This response to Moscow’s withdrawal of substantial forces from the potential conflict zone makes one thing unmistakably clear. It is not Russia but NATO, led by Washington, that is seeking war. Instead of welcoming a partial withdrawal of Russian forces and trying to calm tensions in the region, the NATO powers are denouncing Moscow and escalating their threats. And while the NATO alliance denounces Russian troops located on Russian soil, it is increasing the number of troops it is sending to the very borders of Russia and Ukraine.

Humanity is being brought face to face with the disastrous consequences of the Stalinist dissolution of the Soviet Union in 1991. This not only paved the way for a NATO war drive in the Middle East and Central Asia that cost millions of lives, starting with the 1991 Gulf War in Iraq and continued with wars against Serbia, Afghanistan, Iraq, Libya and Syria. Over this same period, NATO tore apart all the guarantees it gave the Soviet bureaucracy as it dissolved the Soviet Union. This process has now culminated with NATO plans to permanently station troops all across Eastern Europe.

NATO has thrust aside its promises in the 1990s. After then-US Secretary of State James Baker and German Foreign Minister Hans-Dieter Genscher assured Moscow in 1990 that NATO would not spread east after German reunification, NATO and the Warsaw Pact countries signed the 1991 Treaty on Conventional Armed Forces in Europe (CFE). This treaty limited the ability of European countries to stockpile enough conventional arms to mount a large-scale invasion of other countries.

The 1997 NATO-Russia Final Act admitted Poland, the Czech Republic, Slovakia and Hungary, however, as NATO repudiated any pretensions to having a peace policy. In 1999, it bombed Serbia, and in 2002, Washington tore up the Anti-Ballistic Missile Treaty, followed by the Conventional Armed Forces in Europe (CFE) Treaty, whose ratification by NATO it blocked, even as the NATO alliance admitted ever broader sections of Eastern Europe. After scrapping the 2015 Iranian nuclear treaty, Washington also scrapped the Intermediate-range Nuclear Forces (INF) treaty in 2019.

It is impossible to halt the drive to war without the independent political mobilization of the working class in the United States, across Europe and Russia and internationally against the mounting danger of global nuclear war. It is apparent that NATO has no intention to respond to Moscow’s attempts to deescalate the conflict.

Russia’s bankrupt post-Soviet capitalist regime has no progressive response to the NATO war drive. While it is attempting to pursue a more cautious policy in Europe, at least for now, in a failed attempt to mollify NATO, it is signaling that it is considering retaliatory action that could rapidly escalate a conflict in Europe over Ukraine into a global war.

Yesterday, Russian Defense Minister Sergey Shoigu traveled to Syria for talks with President Bashar al-Assad, while 15 Russian warships carried out naval exercises off the Syrian coast. He briefed the Syrian government, whom Iran and Russia have supported in a decade-long conflict against NATO-backed Islamist and Kurdish guerrillas, on the military situation.

“In the conditions when the United States and Western countries are deliberately escalating the international situation, … Shoigu visits Damascus to send a warning message,” Lebanese General Charles Abi Nader told Russia’s TASS news agency. “It implies that Russia will use its strategic facilities in Syria in the event of military confrontation with NATO,” he added, stressing the “significance that Russia attaches to these facilities in a global stand-off.”

Stoltenberg for his part made clear at the Brussels press conference that NATO considers its war drive against Russia as part of a conflict with China. “China is now rapidly developing new nuclear capabilities, long range missiles, hypersonic missiles,” he said, before denouncing both countries: “I think fundamentally what we see is that two authoritarian powers, Russia and China, are operating together. Because that don’t like the rules-based international order.”

The accelerating war drive in Europe and the rapid escalation of military tensions internationally urgently underscore the need to alert and mobilize the working class internationally against the mounting danger of a new world war provoked by the imperialist powers.