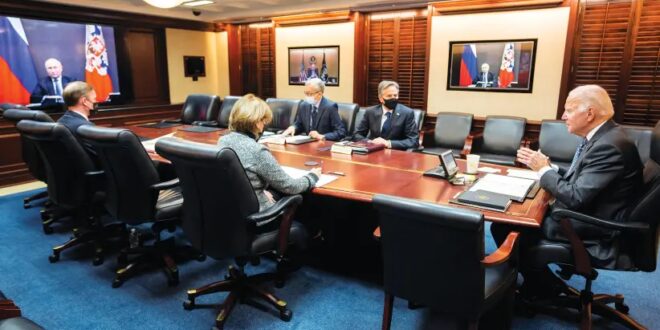 Biden also spoke with Macron earlier on Sunday, as France seeks to mediate between the sides in a last-minute effort to ease tension.

US President Joe Biden and Russia’s Vladimir Putin have agreed in principle to hold a summit on the Ukraine crisis, the office of French President Emmanuel Macron said on Monday. “The substance will have to be prepared by (US) Secretary Blinken and (Russian Foreign) Minister Lavrov during their meeting on Thursday 24 February,” the Elysée palace said. “It can only be held on the condition that Russia does not invade Ukraine.” Macron will help prepare the contents of the discussions, the statement added.

White House Press Secretary Jen Psaki later confirmed the Elysée statement. “As the President has repeatedly made clear, we are committed to pursuing diplomacy until the moment an invasion begins,” she said in a statement.

Psaki noted that US Secretary of State Antony Blinken and Russia’s Lavrov are scheduled to meet later this week in Europe, “provided Russia does not proceed with military action.”

“President Biden accepted in principle a meeting with President Putin following that engagement, again, if an invasion hasn’t happened,” Psaki continued. “We are always ready for diplomacy. We are also ready to impose swift and severe consequences should Russia instead choose war. And currently, Russia appears to be continuing preparations for a full-scale assault on Ukraine very soon.”

Biden also spoke with Macron earlier on Sunday, as France seeks to mediate between the sides in a last-minute effort to ease tension. “They discussed ongoing diplomacy and deterrence efforts in response to Russia’s military buildup on the borders of Ukraine,” the White House said in a readout of the call.

On Friday, Biden said in a press conference that he was “convinced” that Putin made the decision to invade Ukraine. “We have reason to believe that” he said, but added: “until he does, diplomacy is always a possibility.”

“Make no mistake,” Biden Continued. “If Russia pursues its plans, it will be responsible for a catastrophic and needless war of choice. The United States and our Allies are prepared to defend every inch of NATO territory from any threat to our collective security as well.”
“We also will not send troops to fight in Ukraine, but we will continue to support the Ukrainian people,” he added.