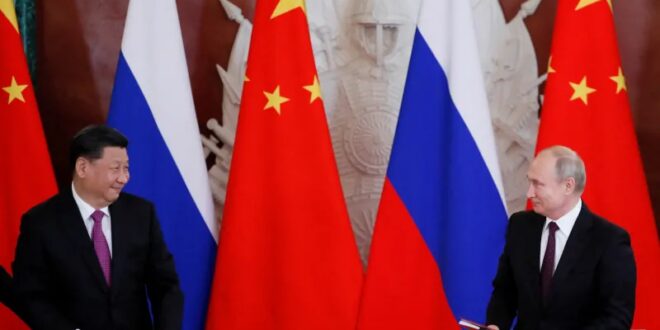 The crisis in Ukraine is exposing the limits of Chinese President Xi Jinping’s foreign policy. Beijing’s global aspirations are now clashing with its desire to remain selectively ambiguous and aloof. Although Chinese leaders may not recognize it, their country’s closer alignment with Russia is far from prudent. The upsides of this move are notional and long-term: Russia might someday return the favor by supporting Chinese territorial aspirations or cooperating on revising the structures of global governance. The costs to China’s larger global strategy, however, are real and immediate.

A tighter Beijing-Moscow axis would further encourage China’s rivals to balance against it, giving them more reason to form closer economic and military ties to defend themselves against Chinese aggression. In European capitals, where the allure of China’s massive market has traditionally blunted efforts to push back against the country, Beijing is already facing stronger political headwinds. And in the United States, the mood on China has grown even darker. If war breaks out in Ukraine, many American politicians will accuse Beijing of having blood on its hands. On Ukraine, China is playing a dangerous game, one it may come to regret.

AN UNWANTED CRISIS
Beijing would no doubt prefer that the current crisis didn’t exist. For starters, Ukraine is an important trade partner for China in its own right, with more than $15 billion in bilateral trade flows in 2020. The country is also a vital gateway to Europe and a formal partner of the Belt and Road Initiative, Xi’s flagship geopolitical endeavor. Last month, Xi extended greetings to Ukrainian President Volodymyr Zelenskyy, noting, “Since the establishment of diplomatic ties 30 years ago, China-Ukraine relations have always maintained a sound and stable development momentum.” Privately, Chinese experts have lamented that Beijing, worried about offending Moscow, doesn’t do more to support an important partner in the Belt and Road Initiative.

Beijing also has no desire to publicly support a Russian land grab, given its deep-seated concerns that others may employ similar logic to undermine Chinese territorial sovereignty. China is hardly a credible opponent of territorial revisionism, of course; look no further than its actions in the East China and South China Seas, its behavior on the Indian border, and its appetite for Taiwan. What it does object to, however, is revisionism undertaken by other powers, Russia included. To this day, it has not recognized the 2014 annexation of Crimea.

The crisis in Ukraine is exposing the limits of Xi Jinping’s foreign policy.
China’s leaders are certainly aware that any support to Russia over Ukraine would aggravate relations with the EU and the United States. Chinese strategists view Russia, the United States, and Europe as the most important determinants of the global balance of power. They have long seen Europe’s dreams of a multipolar world as aligned with their own. By cementing the split between Russia and Europe, a Russian invasion of Ukraine would thus risk dividing the most important powers into two blocs—Russia and China on one side and the United States and Europe on the other—re-creating the Cold War security arrangements that China claims to vehemently oppose. Making matters worse, China would be aligned with the weakest of the three other powers.

It is extremely unlikely, then, that Xi gave Russian President Vladimir Putin the green light to invade, as some claim. Through careful diplomatic messaging, Beijing has publicly supported Moscow’s stance against NATO expansion but still stressed its hope that a diplomatic solution can be found. As Xi said in a February 16 call with French President Emmanuel Macron, “All parties concerned should adhere to the general direction of political settlement, make full use of multilateral platforms … and seek a comprehensive solution to the Ukrainian issue through dialogue and consultation.” Three days later, Chinese Foreign Minister Wang Yi repeated that message, calling the Minsk agreement, the pair of pacts signed in 2014 and 2015, “the only way out for the Ukrainian issue.” He reiterated support for “the sovereignty, independence, and territorial integrity of any country” and noted that “Ukraine is no exception.”

HAVING IT BOTH WAYS
This is where Beijing’s position begins to turn incoherent. For at the same time that it is calling for a de-escalation of tensions, it is feeding Moscow’s belligerence by throwing public support behind its demands and working to lower the costs of Western deterrence. Beijing’s purchase of more Russian energy and the increased use of the Chinese renminbi (instead of the U.S. dollar) for bilateral transactions could insulate Russia from U.S. sanctions. The Chinese foreign ministry’s claim that U.S. warnings of a possible Russian invasion are “false information” undermines Beijing’s simultaneous calls for dialogue, given that these warnings are in fact an urgent call for diplomacy.

Intentionally or not, Beijing has wedded itself to Moscow’s revisionism. In a remarkable joint statement with Putin released on February 4, Xi not only affirmed a shared ideological worldview between the two authoritarian powers but also connected NATO enlargement to their need to “stand against attempts by external forces to undermine security and stability in their common adjacent regions.” China and Russia, the leaders declared, “oppose further enlargement of NATO and call on the North Atlantic Alliance to abandon its ideologized cold war approaches.” They went on: “The sides stand against the formation of closed bloc structures and opposing camps in the Asia-Pacific region and remain highly vigilant about the negative impact of the United States’ Indo-Pacific strategy on peace and stability in the region.”

Beijing would no doubt prefer that the current crisis didn’t exist.
Blurring Russian fears about NATO with Chinese concerns about U.S. activity in Asia may have given Xi a momentary feeling of comradery with Putin, but it comes at the price of relations with the West, which reacted as one could have predicted. As Jens Stoltenberg, NATO’s secretary-general, told the press on February 15, “Fundamentally what we see is that two authoritarian powers, Russia and China, are operating together.” Even though Beijing publicly laments the Cold War mentality it sees as driving Western policy, its increasingly cozy relationship with Moscow cannot but remind observers of the Sino-Soviet relationship of the early 1950s.

It isn’t just China’s relations with the United States and Europe that will suffer. Indeed, its support for Putin’s gambit is enflaming fears in its own backyard. Japanese Prime Minister Fumio Kishida has stated, “We must consider the possibility that if we tolerate the use of force to change the status quo, it will have an impact on Asia, as well”—an elliptical way of suggesting that Beijing may feel emboldened by Putin’s adventurism. Australia’s defense minister, Peter Dutton, has warned that a Russian invasion would encourage China to step up its own coercion of Taiwan. For now, India has tried to remain neutral, with T. S. Tirumurti, its ambassador to the UN, calling for “quiet and constructive diplomacy.” But given rising antagonism between India and China, a Chinese-backed invasion of Ukraine would certainly push New Delhi even further away from Moscow and toward Australia, Japan, and the United States.

THE VIEW FROM BEIJING
Given the costs, why did China choose to throw its lot in with Russia? Surely it was aware that the move would exacerbate tensions with the West and countries around its periphery.

It is possible that Xi genuinely believes that Putin won’t invade Ukraine, which means that lending him rhetorical support won’t incur any costs. Perhaps Putin gave Xi private guarantees that his actions were merely intended to bring the U.S. and NATO to the bargaining table. Xi may have also failed to update his views based on what is happening on the ground in Ukraine. His support for Moscow’s opposition to NATO expansion seems to have begun in December 2021, according to the Russian account of the virtual summit between the two leaders. Back then, a Russian invasion didn’t look likely. In the months since, however, the picture has changed—and China may feel locked into a position it would no longer choose.

It is also possible that Xi believes that if an invasion does materialize, it will hurt Russia, Europe, and the United States more than it will hurt China. As long as China refrains from providing any direct military aid to Russia, it will at most suffer secondary sanctions for its political and economic support. Preoccupied with Ukraine and Russia, the United States and Europe would shift their gaze away from Asia, giving China a freer hand in its neighborhood. In short, although a conflict in Ukraine would be bad for everyone, China might emerge better than the rest.

This is a dangerous and overly simplistic line of thinking. The ramifications of war in Ukraine are too unpredictable to justify betting on conflict. Moreover, there is little reason to suspect that Washington will be battered by a war in Ukraine. Even though the U.S. campaigns in Afghanistan and Iraq may have opened a window of strategic opportunity for China over a decade ago, the Chinese should recognize that the Biden administration’s approach to Ukraine is designed precisely to avoid getting bogged down in a conflict.

On Ukraine, China is playing a dangerous game.
The real driver of Chinese thinking on Ukraine likely has to do with something longer-term: the appeal of a cozier partnership with Russia. Xi views this as the best response to a bleak security environment, characterized chiefly by deteriorating relations with the United States. For all of Beijing’s talk of Western decline, China still considers the United States and its allies powerful enough that frictions with them will define the next decade. It sees Europe as leaning ever further in the direction of the U.S. position, and it feels growing tensions with countries in its immediate neighborhood, including Australia and India.

Relations with Moscow, on the other hand, have been steadily improving for more than three decades, with greater alignment on a range of issues, including ideology, security, cyberspace, and global governance. Tensions still exist, especially over the widening power gap between the two nations. But the two countries have managed their differences remarkably well. A close relationship between Xi and Putin, a shared hostility towards the United States, and an overlapping (though not identical) illiberal vision of the world order are likely sufficient to power the relationship for at least the next decade.

With no leading powers other than Russia available, Xi may have made a calculated bet that a strong relationship with Moscow could amount to a net asset for Beijing. As China presses its many territorial claims along its periphery, it is looking to Russia to counter efforts to contain it. Russia might also offer a critical lifeline if there are international attempts to disrupt the flow of critical goods to China. It has also supported the Chinese position on Taiwan, and in the event of a U.S.-Chinese war over the island, Beijing may expect Russian diplomatic and economic help.

Xi’s growing alignment with Moscow presents something of a catch-22 for China. As it competes with the West over global order, Russia becomes a more attractive security partner. But by elevating the relationship with Russia—and choosing to do so in the middle of a Putin-provoked crisis—Beijing is inviting pushback it can ill afford.