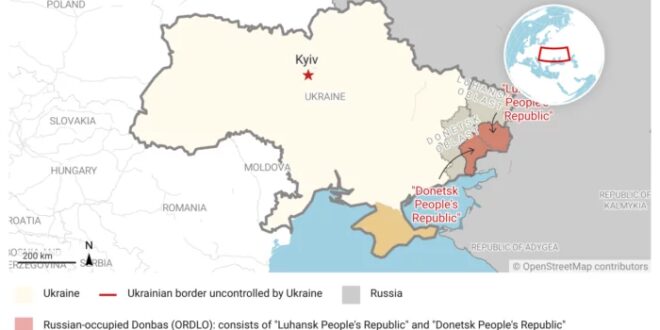 In the war zone:

Escalation all over Donbas. Particularly targeted was the town of Schastia, which was hit by MLRS Grad rockets launched from the Luhansk area, which damaged the local Luhansk thermal power plant. It caught fire, and after having its power lines damaged by with rockets from Russian proxies, was down.

onsequently, the town of Schastia and Vrubivka were left without heat or power, Luhansk military-civil administration head Serhiy Haidai reported.

IT specialists in Kyiv have launched an automated monitoring system to record movements of Russian troops near the borders of Russia-Ukraine and Belarus-Ukraine. The data is published on their website, which is currently in test mode.

President Volodymyr Zelenskyy on Tuesday said he is conscripting reservists for a special period but ruled out a general mobilization.

Vox Ukraine laboriously breaks down the many lies of Putin’s yesterday’s speech.

After recognizing its puppet Donetsk and Luhansk “republics” in Donbas on 21 February, Vladimir Putin on 22 February stated it is recognizing them within the borders of two entire Ukrainian oblasts, the Luhansk and Donetsk oblasts. He also announced Russia is withdrawing from the Minsk agreements.

Russian parliament’s upper house on Tuesday voted to allow President Vladimir Putin to use the Russian army outside the country to support the “LDNR” proxy states in Ukraine.

The MFA added that Russia unilaterally withdrew from the Minsk agreements.

The Rada also adopted a resolution after Russia’s recognition of “LDNR,” in which it also stated Russia unilaterally withdrew from Minsk, called on all international organizations to not recognize “LDNR” and condemn Russia’s actions, called to stop Nord Stream 2 and disconnect Russia from SWIFT, ban hi-tec exports to Russia.

UK has imposes sanctions against 5 Russian banks and 3 oligarchs from Putin’s circle. Magnitsky act founder assesses them as “pretty tepid.”

The European Union has agreed to sanction the 351 members of the State Duma who voted in favor of Russia’s recognition of the “LDNR.”

The targets will come from the political, military, business and media sectors, and will be subject to asset freezes and travel bans, which means they will not be allowed to enter or transit through EU territory.

The new package of sanctions also limits the Russian government’s access to the EU’s capital and financial services markets and blocks the refinancing of Russian sovereign debt. Banks that “finance the Russian military apparatus” will also be penalised.

Additionally, trade between EU countries and the breakaway regions is banned.

Biden, speaking to reporters at the White House, said the United States would impose sanctions against two large Russian financial institutions and Russian sovereign debt. Sanctions were imposed against Russian elites and their family members as well, administration officials said.

“A point of no return.” Ukraine’s civil society leaders appeal to US, EU for “severest sanctions” to stop Russia

Following Russia’s recognition of its puppet statelets in Donbas and decree to introduce “peacekeeping” troops there, Ukraine’s civil society leaders appeal to the US Congress and EU Parliament for a wide scale of targeted sanctions against Russia, including asset freezes, visa bans for oligarchs from Putin’s inner circle and family members, embargo of oil and gas products, stopping Nord Stream 2 for good.

“Now that we see the invasion is beginning and Russia has made clear its wholesale rejection of diplomacy, it does not make sense to go forward with that meeting at this time,” Blinken said at the State Department on Tuesday. “I consulted with our allies and partners — all agree.”

Blinken said he sent a letter to Lavrov on Tuesday to inform him of the decision. He said the US remains committed to diplomacy “if Russia is prepared to take demonstrable steps to provide the international community with any degree of confidence it’s serious about deescalating and finding a diplomatic solution.”

The top US diplomat had proposed the meeting with his Russian counterpart last week “to discuss the steps that we can take to resolve this crisis without conflict,” Blinken said at the time, and accepted it on the condition that Russia not invade Ukraine.

Russia evacuates embassies and consulates in Ukraine; reports of documents being burned

Russia ordered the evacuation of diplomatic staff at its embassy in Kyiv and consulates in Odesa, Lviv, and Kharkiv, saying that they’ve been “repeatedly attacked” since 2014 and citing “Russophobia.” Following this, reports came in that items (presumably, documents) were being burned outside the consulates in Lviv and Odesa.

Minister of Justice Dmytro Maliuska says: “Just in case, for the next few weeks, don’t react emotionally to fake videos & paid protests near prisons,” he adds

Russia was planning to launch terrorist acts involving arsoning 4 churches of the Moscow Patriarchate in Kharkiv, Ukraine’s SBU says. SBU claims it intercepted phone calls with participation of a Russian client Reportedly, the perpetrators were to be paid $1k.

Rallies in support of Ukraine in Berlin, Mariupol

Post Views: 99
Previous Biden’s Real Challenge is Not Russia or China, but Poverty in America
Next “A point of no return.” Ukraine’s civil society leaders appeal to US, EU for “severest sanctions” to stop Russia