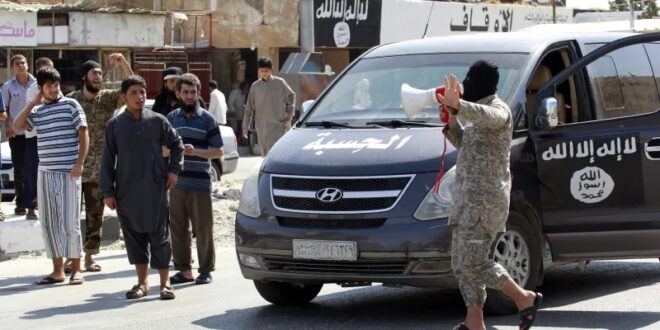 A Vacancy at the Top Threatens the Group’s Global Operations

It is only February, and already, the Islamic State (also known as ISIS) has had a rough year. ISIS’s supporters quickly went from cheering on a large prison break in northeast Syria to learning, days later, that the group’s reclusive leader, Abu Ibrahim al-Hashimi al-Qurayshi, was killed in a daring U.S. special operations raid.

Before Qurayshi’s death, there was growing concern that ISIS might be resurgent. Beyond the prison break in Syria, where ISIS fighters had managed to maintain control of the facility for several days despite a powerful military assault by U.S. and Kurdish-led forces, there were other troubling signs of the group’s vitality. A February report from the UN Security Council sanctions monitoring team expressed alarm at ISIS’s growing power in various central African provinces and its resurgence in Afghanistan now that U.S. troops are gone. In Iraq and Syria, even though ISIS has been conducting fewer guerrilla activities, there are still stark political and sectarian divisions, rural areas stressed by climate change, and post-pandemic economic difficulties—all of which could fuel an ISIS comeback.

With Qurayshi’s death, however, the prospect of a serious comeback any time soon looks less likely. Targeted killings rarely end movements like ISIS, but this one has forced an important leadership transition on the terrorist organization. The United States has killed many of its leaders in the past, but the timing of this loss is particularly bad for the group: it suffers from dwindling cash supplies, a thin bench of replacement leaders, and a decline in operations in its heartland of Iraq. ISIS’s core leadership in Iraq and Syria must now make a strong case for why the organization’s franchises around the world should pledge allegiance to a leader who will likely be as anonymous as Qurayshi. Whether they succeed or fail will decide ISIS’s fate as a global enterprise connecting jihadist groups from West Africa to East Asia.

A HIGH-TURNOVER JOB
Both locally and globally, ISIS is held together by its members’ general acceptance of their leader as legitimate. ISIS must now select its fourth leader in history, and there is reason to believe that this will be its most difficult transition.

In 2004, the infamous Abu Musab al-Zarqawi pledged his small group to Osama bin Laden, and the group became known as al Qaeda in Iraq. Months after Zarqawi was killed in a 2006 American airstrike, his followers formed the Islamic State of Iraq—later expanding into Syria and rebranding themselves as ISIS. In doing so, they established leadership succession practices that the group has followed to this day.

As its leaders explained in a publication released in 2006, the group would adopt the caliph selection practices used in the first Islamic State (established in 622 CE), quoting religious scholars and the historian Ibn Khaldun as justification for a readoption of traditional practice. Drawing from this guidance, ISIS’s chiefs formed a leader-selection committee with representatives from the various groups that merged to create the proto-state. They agreed that the most important criterion for choosing a supreme leader was superior religious knowledge. And as an unwritten requirement, they established the practice of selecting a documented descendant of the Prophet Muhammad’s Quraysh tribe, a collection of clans that traditionally governed Mecca. The idea was to build legitimacy into the succession process by tying it to the tribal identity of the first four caliphs who ruled after Prophet Muhammad’s death.

The next ISIS leader will likely be announced in the coming weeks.
Zarqawi’s successor as the leader of the new Islamic State of Iraq was Abu Umar al-Baghdadi, a veteran of al Qaeda in Iraq with a traceable lineage to the Prophet Mohammad’s Quraysh tribe. He was killed in 2010 by U.S. and Iraqi special operations. Abu Bakr al-Baghdadi al-Qurayshi was selected in the same manner after several weeks of silence and went on to lead a resurgence of the group and the declaration of the caliphate. He was killed by U.S. special operations forces in 2019 in Syria, and replaced by Abu Ibrahim al-Hashimi al-Qurayshi after a five day period.

Given this historical precedent, it is highly likely that the next leader will be announced in the coming weeks and that he will have a résumé like his predecessors: he will be a religious scholar and jihadi veteran with Qurayshi lineage who is in ISIS’s inner leadership circle. What the group hopes will follow is a series of public renewals of the allegiance pledge to the caliph by ISIS’s members and global affiliates. After all, ISIS’s claims of authority rely on the acknowledgement and acceptance by constituents.

This time around, however, ISIS may confront obstacles during the succession process given the problems associated with Qurayshi’s tenure. Like his predecessor, Qurayshi took over during a down-cycle but had no major successes during his tenure. He had risen rapidly up ISIS’s ranks since 2007, and by 2014 was one of Baghdadi’s top religious advisers who allegedly argued for the genocide of Iraq’s Yazidi communities. Qurayshi had a leg amputated while serving Baghdadi, possibly as a result of a 2015 airstrike targeting top ISIS leaders. But his reign was dogged by stories about his days as a U.S. informant, especially after the U.S. government released interrogation files showing that he had willingly provided detailed insights about ISIS’s early days to his U.S. captors when he was in prison in Iraq. He even divulged information that helped the U.S. military kill his supervisor and al Qaeda in Iraq’s no. 2 leader, Abu Qaswarah, in 2008.

In many ways, Qurayshi took over an organization with problems in Iraq and Syria but was well prepared by his predecessor to manage a global insurgency. Qurayshi continued to support the group’s far-flung franchises with money and advisers, a gambit that kept supporters’ morale up as the group struggled to make ground in its historic core areas. As ignominious in life as in death, Qurayshi’s final act was to kill his wife and children when he detonated explosives during the U.S. raid. In his wake, ISIS confronts a perilous path.

HELP WANTED
ISIS’s inner circle now finds itself in a precarious position with two basic options for a new leader, either of which opens a range of possibilities. The first, and most likely, is that the group follows its established succession processes but lands on a leader who is markedly different from his predecessors. For example, the group could pick a non-Iraqi leader, perhaps a Syrian, a choice that would all but confirm a slight shift in its center of gravity from Iraq to Syria. Another possibility is that the next caliph emerges from ISIS’s new generation—someone who, unlike his predecessors, has no connection with the founding fathers who first fought against the occupiers in Iraq well over a decade ago. This could improve its support among the current generation of supporters who are much more passionate about the plight of Sunni Arabs in Syria than the Iraq war of two decades ago.

The second option is that ISIS abandons its established practices in selecting Qurayshi’s replacement, suggesting that its leaders are divided or too deep in hiding. It’s conceivable, for example, that ISIS does not acknowledge the death of its leader, hinting that the United States is in error (once again) about the identity of its leader. Alternatively, a leader may bypass the established succession process and claim authority on his own—an almost certain sign of internal instability. And any new leader, whether he emerges from a formal process or not, could find his authority contested. In all these irregular scenarios, there is a very real threat of infighting, which would make the ISIS threat more volatile if less coherent.

ISIS is more vulnerable now than it was three years ago.
Beyond the parochial interests of the core and leadership council, the ISIS franchises of the world are waiting to see who the new leader is, as the choice relates to why they joined ISIS in the first place—the perceived legitimacy of a global caliph in the tradition of the Islamic empire. A year before Abu Bakr al-Baghdadi’s killing in 2019, the West Africa province openly deliberated the validity of its pledge to the caliph and determined that it was still legitimate because he was chosen by the esteemed selection council. Just a year later, it renewed its pledge to the unknown Qurayshi along with all other provinces, a coup for the ISIS succession process. After Qurayshi’s short two-year tenure, during which they did not hear from him once, will they collectively decide to double down on their faith-based bet? And will they receive the same support from the new—and likely just as anonymous—leader? Some groups may decide that the notoriety of being an ISIS franchise is not worth this risk and strike out on their own.

U.S. President Joe Biden got a much-needed win with the killing of Qurayshi. In a test of its shift to an “over-the-horizon” counterterrorism approach, the Pentagon directed a special operations raid from Iraq up to the shadow of the Turkish border. The operation was an unmitigated success. And it justifies continued pressure on an ISIS that is more vulnerable now than it was three years ago, as it lost territory and suffered the death of Baghdadi.

This victory came just in time. The debacle of the U.S. withdrawal from Afghanistan, along with Chinese aggression over Taiwan and Russian aggression over Ukraine, has caused allies to wonder if the United States can do two things at once: deter great powers and fight jihadists. With Qurayshi’s death, however, European capitals have breathed a long sigh of relief. If ISIS was planning terrorist attacks in European cities, chances are they are now a much lower priority for the group as it braces for the drama of having to choose a new leader again.

Post Views: 128
Previous Putin’s Long Game in Ukraine
Next Why Arabs Do Not Trust the Biden Administration