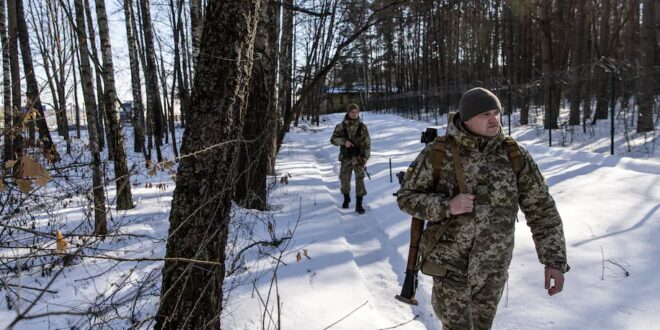 Opinion: A path out of the Ukraine crisis

Russia’s invasion of Ukraine might come “any day now,” the Biden administration warns, with intelligence rumors marking Wednesday as a likely date. If Russia does invade, the United States and its allies have pledged to impose “severe economic sanctions” on Russia. The result would be horrible casualties in Ukraine, and, with Russia now supplying as much as 40 percent of Europe’s natural gas, significant economic disruption in both Russia and Europe that would surely affect the rest of the world as well.

If Ukraine does blow up, questions about our course — already constricted by administration officials lobbing McCarthy-esque accusations at critics and reporters — might easily be overwhelmed by patriotic zealotry. So it is worth asking now: What is this conflict about?

It certainly isn’t about the West’s defense of Ukraine. Three U.S. presidents have made it clear that the United States does not believe Ukraine is worth defending militarily. Despite continued flirtations, Ukraine is not part of NATO, nor is it likely ever to be admitted to NATO. In reality, Ukraine is the closest thing Europe has to a failed state. It’s the only Soviet republic whose economy has declined from where it was as of the Soviet Union’s breakup. As historian Adam Tooze has detailed, from 1990 to 2017, Ukraine’s gross domestic product per capita (in constant dollars) fell 20 percent. That’s the fifth worst in the world, above only the Democratic Republic of Congo, the United Arab Emirates, Burundi and Yemen.

Russia’s central demand is that Ukraine not be admitted into NATO. Rather than agree, NATO’s members have decided the alliance can’t say that it won’t do what it has no intention of doing. Instead, Secretary of State Antony Blinken argues that Ukraine, like any sovereign nation, has the right to decide who it aligns with and NATO will defend its “open door” admission policy. In rallying the allies, Blinken has even claimed that the post-Cold War international order itself is at stake, and that order’s principles “reject the right of one country to change the borders of another by force; to dictate to another the policies it pursues or the choices it makes, including with whom to associate, or to exert a sphere of influence that would subjugate sovereign neighbors to its will.”

But none of these arguments hold water. Ukraine certainly has the rights of a sovereign nation, but it cannot align with NATO without being admitted. The “open door” policy, per NATO’s founding treaty, applies to countries “in a position … to contribute to the security of the North Atlantic area.” Ukraine is in no position to do that.

Furthermore, the post-Cold War international order — with the United States as a unipolar power — is already over. China has emerged as a global economic power and a regional military force. Whatever one thinks of Russian President Vladimir Putin, his country is no longer a lap dog and now sees itself as a great power once again, with security interests to defend. This month, Russian and Chinese leaders declared in a joint communique that they seek a “new era” and will no longer accede to the American-led order.

Finally, those principles that Blinken invokes apparently were meant to apply only to others. After its disastrous offensive war of choice in Iraq, the United States is not exactly the exemplar of a rules-based order. The Monroe Doctrine, the sanctions on Iran and Venezuela, the Cuba embargo, and even NATO itself all mock Blinken’s strictures against spheres of influence and dictating other countries’ policies.

The test for this administration isn’t to defend the pretensions and follies of any international order. It is to adjust U.S. global policy to meet the threats we face. Those include catastrophic climate change and global pandemics, which cause more damage and deaths than military conflicts.

Putin’s goal is the status quo: Keep Ukraine out of NATO. We have already made clear we aren’t prepared to defend Ukraine militarily. Isn’t it time for a deal that guarantees Ukraine’s sovereignty and independence in exchange for guaranteeing its neutrality? As I wrote last month, that outcome has already been detailed in the Minsk accords — negotiated by Russia, France, Germany and Ukraine, and endorsed by the European Union and the United Nations. Rather than invoking a global order that no longer exists, the Biden administration should consider an agreement that offers a path out of this mess.

Post Views: 131
Previous Are Russia and America Headed Towards a Disastrous Conflict Over Ukraine?
Next Russia Steadily Rebuilding Presence in Africa