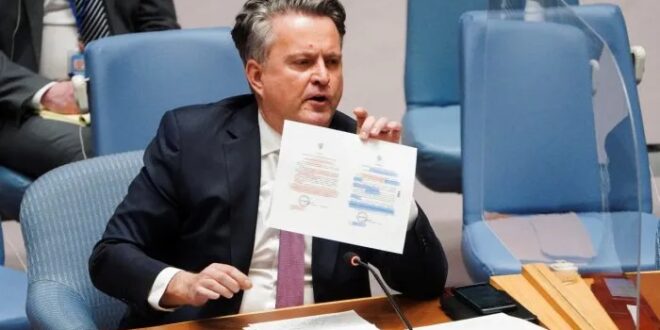 The entrance of Russian troops within Ukraine’s eastern breakaway states raised suspicion and fears that the Kremlin may be positioning itself for an invasion of Ukraine. This series of military actions come after Putin created a pretext by signing decrees recognizing Donetsk and Luhansk as republics independent of Ukraine, effectively destroying the Minsk Protocol, an agreement which sought to end the war in Donbas through a series of bilateral ceasefires and monitoring.

Columns of military vehicles, armored personnel carriers and tanks were seen entering Donetsk just hours ago as Putin signed the decrees as well as the friendship treaties. No insignia was reportedly found by those observing the situation on the ground. However, reports online were later verified by different news sites. A great number of civilian buses were also used to bring Russian troops into the region.

These military movements come after Russia accused Ukraine forces of plotting a so-called ‘blitzkrieg’ against Russian forces along the heavily fortified Ukraine borders, shelling Russian territory, and committing acts of sabotage—all of which were denounced and rebuked by Ukraine’s Foreign Minister Dmytro Kuleba.

Various journalists backed this, with NBC News Chief Foreign Correspondent Richard Engel stating that attacks came from the Ukrainian side and that no Ukrainian offensive actions were ongoing during his time in the hotly contested region of Donbas. As for Putin, he blames the US-led alliance and NATO for not complying with his demands in a speech antagonizing Western leaders. It can be remembered that one of Russia’s high priority demands was that NATO would not allow Ukraine and other former Soviet countries to join the alliance, as well as pulling back its forces from NATO countries, which was naturally rejected by the United States and the rest of the West.

No, Ukraine did NOT:

Ukraine also does NOT plan any such actions.

Minister Kuleba urged world leaders not to fall asleep as the next hours would be integral to how Russia is kept at bay, stating, “Ukraine insists: further Russian actions rely on how the world reacts. Russia must be in no doubt that the world talks the talk and walks the walk on sanctions.” He followed these statements up with a phone call with the US Secretary of State Antony Blinken, where they discussed key sanctions ahead of their meeting tomorrow in Washington DC.

Despite these actions of unity from the United States, a senior Biden administration official in a report done by the Military Times had said that it was still looking to consult its allies about diplomatic solutions and more economic sanctions to Russia. This administration official asserted that Russian troops moving into Donbas was not a new step as Kremlin forces had been present in the region for over eight years.

Furthermore, he had reiterated Biden’s stance about US troops fighting in Ukraine, stating that “We have been warning individuals and groups we think could be targeted based on our understanding and our knowledge of Russian plans to try to enable them to protect themselves or move to places where they might be safer,” said the Biden senior administration official, “but I have nothing to add to what the president already said, which is that he had no intention of sending American forces to fight inside Ukraine.”

While several countries and organizations are preparing to impose economic sanctions on Russia following its recognition of the breakaway states and its mobilization into Ukrainian territory, the United Nations Security Council held an emergency meeting on Monday night as requested by Ukraine, at 9 pm ET at the request of Ukraine’s UN Ambassador Sergiy Kyslytsya.

In a very straightforward statement, US Ambassador Linda Thomas-Greenfield stated that the Russian troops deployed to the Donbas regions were not peacekeepers, saying, “He calls them peacekeepers. This is nonsense. We know what they really are,” and that Putin’s speech earlier had been littered with a series of outrageous, false claims that were creating a false pretext for war.

China Representative to the UN Security Council Zhang Jun, in response to statements of solidarity with Ukraine by various countries present in the meeting, took a more neutral tone after Russia’s Putin and China’s Xi had met ahead of the Beijing Winter Olympics. He had stated that “All parties must exercise restraint and avoid any action that may fuel tensions. We welcome and encourage every effort for a diplomatic solution and call on all parties concerned to continue dialogue and consultation and seek reasonable solutions to address each other’s concerns on the basis of equality and mutual respect.”

The Russian Federation Representative Vasily Nebenzya, who also sits as the current president of the UNSC, rebutted several claims made by Ukraine allies during the meeting and painted Ukraine as the aggressor in the conflict. “Kyiv not only very quickly returned to its bellicose rhetoric and continued the shelling of civilians but also did everything it could to sabotage and destroy the Minsk agreements. And most importantly, here is the flat refusal of Kyiv to speak directly with the representatives of Donetsk and Luhansk despite the fact that this requirement is a central structural element of the package of measures,”

Representative of Ukraine to the United Nations Sergiy Kyslytsya retorted against Russia’s claims that the Donbas regions were independent of Ukraine, stating that its internationally recognized borders have been and will remain unchangeable regardless of any actions and statements by the Kremlin. “What will happen next? We want peace, and we are consistent in our actions,” said the representative. ”

“We are committed to a political and diplomatic settlement and do not succumb to provocations… We are on our land. We are not afraid of anything or anyone. We owe nothing to anyone. And we will not give away anything to anyone. There should be no doubts whatsoever because it is not February 2014. It is February 2022.”

Post Views: 58
Previous Support increases for new US bases in Eastern Europe as Russian troops move into Ukraine
Next Russia just ordered troops into Ukraine again. What happens next?