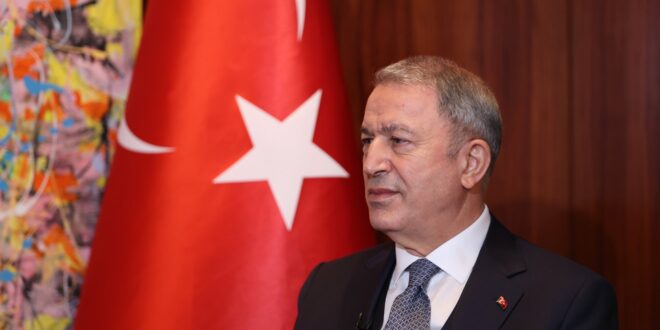 Speaking to reporters on the sidelines of the Munich Security Conference, Akar said: “We all agree on the fight against terrorism and getting rid of it as soon as possible.”

“I have expressed to them very clearly: ‘We have been fighting (terrorism) for 40 years. Now we need to get rid of it as soon as possible,” Akar said. “For this reason, we reminded them of our principle ‘wherever there is a terrorist, that is our target.'”

Turkey has carried out a series of offensives, known as the called “Claw” operations, since 2019 against terrorist groups in northern Iraq, particularly the PKK. Operations Claw-Tiger and Claw-Eagle were initiated in June 2020 in the Sinjar, Qandil, Haftanin and Zap regions, while operations Claw-Lightning and Claw-Bolt were launched last April in Metina and Avashin-Basyan regions.

No matter what anyone says, Turkey is determined to root out terrorist organizations that threaten the security, peace and stability of the country and the region, President Recep Tayyip Erdoğan said earlier this week regarding the ongoing operations.

A Turkish Defense Ministry statement said strikes hit targets in the Sinjar mountains and Karacak region of northern Iraq, as well as the Derik region in northern Syria, in a new aerial operation designed to protect Turkey’s borders from terrorist threats. Operation Winter Eagle targeted the PKK in northern Iraq and its Syrian branch, the YPG, in Syria. The terrorists’ shelters, caves, tunnels, ammunition depots, bases and training camps were struck during the operation, the ministry said.

The airstrikes are part of an ongoing Turkish campaign in Iraq and Syria against the PKK and YPG. Turkish forces have carried out similar cross-border airstrikes in the past and routinely conduct military strikes against suspected PKK hideouts in the area.

President Erdoğan, who has pledged to “clean up” parts of northern Iraq, accuses the PKK of using the mountainous border area as a springboard for its uprising.

Viewed as a terrorist group by Turkey and its Western allies after a decadeslong insurgency against the Turkish state, the PKK has bases and training camps in the Sinjar region of northern Iraq and on the mountainous border with Turkey.

The Sinjar mountain range, home to Iraq’s Yazidi minority, is an area controlled by various armed forces and groups and where PKK terrorists and their local allies operate.

Turkey also has a military presence in neighboring Syria, where it has seized swaths of territory in successive military operations since 2016.

In its more than 40-year terror campaign against Turkey, the PKK – listed as a terrorist organization by Turkey, the United States and the European Union – has been responsible for the deaths of at least 40,000 people, including women, children and infants.