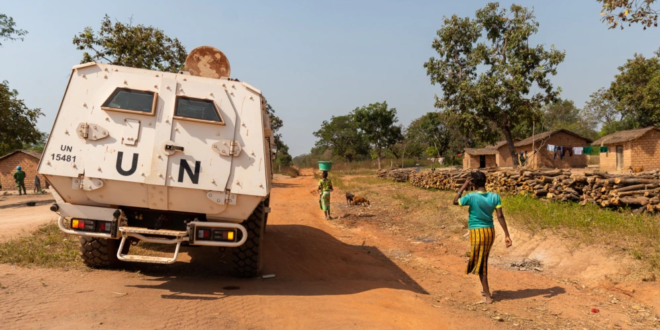 The United Nations’ independent expert on human rights in the Central African Republic says the government and its Russian allies should stop obstructing investigations.

The U.N.’s Yao Agbetse says the C.A.R. military and Russian mercenaries prevent access for U.N. investigators and are believed responsible for nearly half the country’s rights violations.

Clashes are still going on in the Central African Republic countryside, where the national army and Russian mercenaries are chasing the rebels who attacked the capital of Bangui last year.

During the past four months, at least 229 civilians have died, according to a recent U.N. report. But that figure could be underestimated, because U.N. investigators are prevented from accessing sites of various alleged crimes.

The U.N. recently sent Agbetse to Bangui with a message for the Central African government: Draw a red line that allies cannot cross, he said. If U.N. investigators are impeded from accessing places where violations could have been committed, he added, the assumption is that the government doesn’t want the truth to be known.

The U.N. said it documented at least 4 cases of mass executions since October, mostly around mining sites.

When asked why the C.A.R. government is blocking access to the sites, presidential spokesperson Albert Yaloke Mokpeme questioned why the U.N. has been in the country for eight years, but failed to protect them from attack.

He also said that for years the rebels illegally occupied ore deposits and exploited them to buy weapons, so his government acted accordingly.

When asked again why the government is impeding access to the sites, Mokpeme said, “We are not preventing anyone from doing their job, but don’t tell us what to do.”

Experts say Russian mercenaries from the private company Wagner Group gain mining contracts in the C.A.R. in exchange for their military support.

Wagner Group is widely believed to have links to the government of Russian President Vladimir Putin.

The Russian government has denied any such link.

Post Views: 99
Previous Erdogan seeks to boost ties with Africa in four-day visit
Next Russia invades Ukraine; explosions are heard in Kyiv and other cities