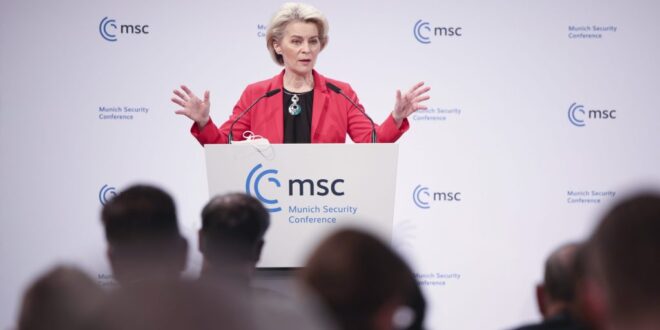 What I heard in Munich: A lot of bold words, but little bold action

With Europe seemingly on the brink of a war, transatlantic resolve emerged as the key feature of this year’s Munich Security Conference (MSC).

During the last in-person MSC in 2020, French President Emmanuel Macron presented his vision of “European independence” and “strategic autonomy.” But those terms were rarely discussed this year: The reality of the moment demanded clarity and action.

So this time, Macron skipped the conference altogether and spent the weekend negotiating a meeting between US President Joe Biden and Russian President Vladimir Putin. This is what I call transatlantic teamwork.

Yet remarks by officials over the weekend, as well as conversations I shared with attendees, also clearly illustrated that Europe and the United States still lack a roadmap to finish the project of what then US President George H.W. Bush envisioned back in 1989 would be a continent “whole and free.” With Russian aggression peaking, the stakes are higher than ever—but the transatlantic community does not seem to be up to the challenge.

Together again?
Teamwork and US leadership was a common thread throughout the conference.

Following repeated American appeals for a united response—which included personal calls by Biden to leaders such as Italian Prime Minister Mario Draghi—the European Union (EU) reached agreement on sanctions against Russia. In contrast to previous crises, when it took months for the EU to decide on punitive measures, packages were now prepared; coordinated with the United States, the United Kingdom, and Canada; and ready to be executed within hours.

Equally, on energy security, the EU was grateful to the Americans for supplying liquified natural gas to counter Russian attempts to withhold gas despite high demands. The United States had also been helpful with outreach to other suppliers and buyers such as Japan and South Korea, who were willing to redistribute parts of their purchases to the EU.

Meanwhile, French Defense Minister Florence Parly pragmatically declared that expectations of European defense should be modest, since Europe still lacked critical enablers such as drones, intelligence, and surveillance, and remains dependent on the United States for these. The Strategic Compass, a guideline document for European defense to be endorsed by the EU in March, was as much as the EU could deliver at this point.

The new German government—although off to a bad start with the Biden administration on a range of issues from China to the Nord Stream 2 natural-gas pipeline—emphasized the importance of the transatlantic relationship. Chancellor Olaf Scholz reassured that “the closer the United States and Europe coordinate, the better off we are” and called for a strong European pillar in the Alliance (a theme carried on from the 2020 MSC).

On Russia, German Foreign Minister Annalena Baerbock made it clear that there was no “Ukraine crisis,” only a “Russian crisis,” while Scholz warned that “we must not be naïve” but “see the facts as they are.”

Still, Germany’s unwillingness to step up on defense spending prevailed. Defense Minister Christine Lambrecht was cautious about increasing the German defense budget, citing costs for dealing with the coronavirus pandemic and climate change—issues with which all allies are struggling.

Yet at a time when Europe is facing a transformational threat from its neighbor, this is unacceptable for the fourth-largest economy in the world. That’s why the United States and other allies will continue pushing Germany to step up on defense—not because it is a nice thing to do, but because it is necessary.

Who belongs?
Given tense relations across the Atlantic during the Donald Trump presidency and, more recently, amid the withdrawal of Afghanistan and the launch of the AUKUS defense alliance, the relatively high level of unity on display throughout the MSC was an achievement in itself. But the broad consensus among leaders on how to deal with Russia meant that few voices questioned the approach.

In fact, it was only challenged by the very country it sought to help: Ukraine.

In his speech, Ukrainian President Volodymyr Zelenskyy accused the West of attempting to appease the Kremlin and demanded much bolder initiatives to counter Russian aggression. Arming Ukraine was not charity, he argued—it was about defending all of Europe. He called for the EU and NATO to set up timelines for accession talks, consultations with the guarantor states of the Budapest Memorandum, and a summit of the permanent members of the UN Security Council with the participation of Germany, Ukraine, and Turkey.

At first I was almost provoked by his words, since the support for Ukraine appeared so unanimous. What more could he ask for?

But then I recalled last year’s virtual MSC, when Biden declared that the United States would continue pushing for a Europe whole, free, and at peace. In Munich this weekend, Scholz reaffirmed Germany’s support for that vision. Considering how contested the space in Europe has become, these are bold words—since the costs for freedom and peace have increased drastically. But frankly, those bold words have not been paired with bold action.

EU and NATO enlargement were key instruments for stabilizing Europe after the Cold War. But where is the will to use them further? Former Estonian President Kersti Kaljulaid was one of few who seized on that point by suggesting “emergency access” for Ukraine to the EU—that is, start talks immediately to show Ukrainians that membership is a real possibility.

Basically, Zelenskyy challenged those in attendance to go forward with a Europe whole, free, and at peace—or, honestly, leave it behind. And as I left the Bayerischer Hof Hotel after the conference concluded, I found myself believing that he is right. Succeeding in deterring a Russian invasion in the short term will not solve the long-term question of who belongs to Europe, and on which principles that is to be decided.

As long as there are doubts, that means weakness and vulnerability for all, regardless of transatlantic unity.

Post Views: 183
Previous Russia invades Ukraine; explosions are heard in Kyiv and other cities
Next China and Russia are proposing a new authoritarian playbook. MENA leaders are watching closely.