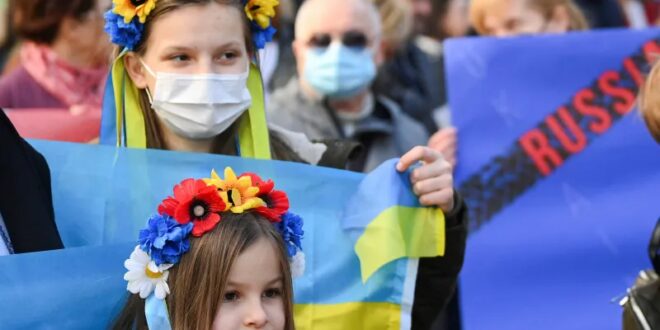 The West has underestimated Vladimir Putin again. Time and time again, the aging Russian president has declared that Ukraine is not a real country, that Russia’s historic lands sit in Ukraine, and that Ukrainian President Volodymyr Zelensky is a Western puppet and an illegitimate leader. By November, more than 100,000 Russian troops were surrounding Ukraine on three sides, and soon the White House was issuing increasingly dire warnings of a coming attack. And yet somehow, most in the West shrugged. Many smart and experienced experts were convinced Putin was bluffing. They dismissed his saber rattling as merely a ploy to increase his hand at the negotiating table, where he unsuccessfully sought the right to have a veto over which countries joined NATO. Only at that point did Western countries turn up the pressure on Putin.

Then Putin invaded Ukraine. At 5:00 AM Kyiv time on February 24, Russian forces lobbed missiles at military sites and airports in more than 17 of Ukraine’s 27 regions, surprising the many analysts who expected a limited incursion at most. The strikes came by land, sea, and air. According to the Ukrainian military, Ukrainian forces shot down seven Russian planes and seven helicopters, and damaged or destroyed 24 tanks and more than 20 armored vehicles. At least 137 Ukrainians were killed and 316 injured. Although the damage was widespread, Ukraine did not roll over. Andrii Osadchuk, a reform-minded member of the country’s parliament, told me that the Russians didn’t do as well as they expected. “The bottom line of the first day: the Russians have got dramatically less than they planned and expected,” he said. “Ukraine fights.”

By the evening, Russian troops were closing in on Kyiv, a city of three million sitting on a hill divided by the Dnieper River. Many of the capital’s roads are narrow and hard to navigate, and its residents may be armed to the teeth. According to the news site Ukrayinska Pravda, 10,000 assault rifles were passed out to Kyivans to protect their city in the coming battle. Members of parliament, for their part, were offered AK-47s.

While the international television coverage fixated on the jammed road from Kyiv to Lviv, the western Ukrainian city to which thousands were trying to flee for safety, thousands of others were choosing to stay put, joining territorial defense units to defend their country. Volunteers are an official part of the armed forces and are authorized to use heavy weapons. “We will be fighting,” Oksana Markarova, the Ukrainian ambassador to the United States, said Thursday. “Not only our brave and motivated military but all Ukrainians.”

Putin has badly miscalculated by invading Ukraine. He may find it easy to pull off a swift invasion, but then comes the hard part. The Ukrainian people will never allow Moscow to chart their course or pick their president. The desire for freedom is ineffable, and Ukrainians have proved that they are willing to die for it.

PUTIN’S WISH LIST
Will Putin’s gamble pay off? It depends on how you define Moscow’s objectives. Putin wants to freeze the westernization drive that began in Ukraine in earnest in 2014, destroy NATO’s unity, humiliate the United States, and rewrite the European security architecture. Cleverly, he is using Ukraine as a chance to achieve all four goals.

In all likelihood, Russia will wipe out Ukraine’s air defenses within a day, at which point Russian tanks will roll in. Once they do, fierce hand-to-hand combat may ensue. Although Russia’s forces massively outnumber Ukraine’s, the smaller country has some advantages. Ukrainians have been resisting Moscow’s attempt to take their lands for years—first Crimea and then the Donbas. Ukraine’s troops are highly motivated, know the terrain well, and see the current crisis as existential. In other words, Putin may be able to take the whole country if he uses overwhelming force, but he won’t be able to hold it forever. Resistance will be fierce, especially in western Ukraine, the birthplace of Ukrainian nationalism. In a January poll of Ukrainians taken by the Razumkov Centre, a Kyiv think tank, 45 percent of respondents said they would resist Russian invasion, weapons in hand.

Next on Putin’s wish list is to get rid of Zelensky. Ousting the Ukrainian president won’t be easy. The war has transformed the former comedian from a provincial politician with delusions of grandeur into a bona fide statesman. Zelensky and his team spent most of 2021 consolidating power and dragging their feet on much-needed judicial and anticorruption reforms. Grave as Zelensky’s failure to reform Ukraine may be, in the midst of Putin’s intransigence and aggression, the president has shown a stiff upper lip. He has demonstrated enormous physical courage, refusing to sit in a bunker but instead traveling openly with soldiers, and an unwavering patriotism that few expected from a Russian speaker from eastern Ukraine. Zelensky, to his great credit, has been unmovable. When in February, the West privately pressured him to capitulate and freeze his country’s NATO aspirations for a predetermined period of time, he told them off. He did the same thing when it tried to get him to implement the disadvantageous Minsk agreements, the pair of accords intended to end the war in the Donbas.

Ukrainians will never accept a Kremlin-anointed leader.
Zelensky and his team have done much right and much wrong. Days before the invasion, the long, porous border between Ukraine and Russia was one of Kyiv’s greatest vulnerabilities. Puzzlingly, the Ukrainians didn’t harden it months ago. As T. X. Hammes of the U.S. National Defense University argued in December, they should have lined the border with drones, mines and improvised explosive devices. Ukraine also waited too long to mobilize its reservists. And Zelensky’s messaging has been inconsistent. One day he said the threat wasn’t a big deal; another he said the Russians could take the northern city of Kharkiv at a moment’s notice.

In Kyiv’s halls of power, rumors abound that Putin wants to get rid of Zelensky and install a more pliable leader. In a brief video address, Zelensky said that he was “target number one” for Russian forces. It is on the question of leadership that Moscow may miscalculate most. Ukraine has changed dramatically since the 2014 Euromaidan revolution, which swept the pro-Russian president, Viktor Yanukovych, from power. But Moscow does not understand how profound the change has been. After resisting Russian aggressions for eight years, suffering the deaths of 14,000 people in the ensuing conflict, and the internal displacement of 1.7 million people, Ukrainians will never accept a Kremlin-anointed leader. Russia is underestimating Zelensky’s pluck. The president knows that he may be killed, and his family, too. And still, he is undeterred.

READY TO DIE
Putin surely fears getting bogged down in a protracted insurgency. He knows that a drawn-out conflict would entail massive Russian causalities and thus trigger unhappiness at home. But in the eight years since he illegally annexed Crimea, an act that prompted thousands of Russians to take to the streets in protest, Putin has successfully insulated himself against domestic discontent. Putin has choked off nearly all political life, eviscerating civil society and the free press. Almost all Russian opposition leaders now live in exile. Any truly independent media outlet operates abroad.

All that is to say: some of the Russian public may dislike Putin’s war, but there is simply little space for them to object. On Thursday, Russians in 53 cities took to the streets to protest the war, and 1,700 people were detained, but the sad reality is that a few thousand Russians waving placards will not overturn Putin’s regime. Plus, Russian narratives of Ukraine are strongly held, with opinion polls showing that a majority of Russians support the annexation of Crimea and independence for the separatist territories.

Among Ukrainians, however, Putin faces an entirely different kind of challenge. Twenty miles off the coast of Ukraine, in the Black Sea, lies Snake Island. On the day of the invasion, a Russian ship approached the island and demanded that the 13 border guards stationed there lay down their weapons. They declined to do so and were all killed. Snake Island is miniscule, little more than a grass-covered rock in the ocean, and yet its defenders refused to be cowed. Why, ultimately, will Russia fail and Ukraine prevail? Because of courage like that.