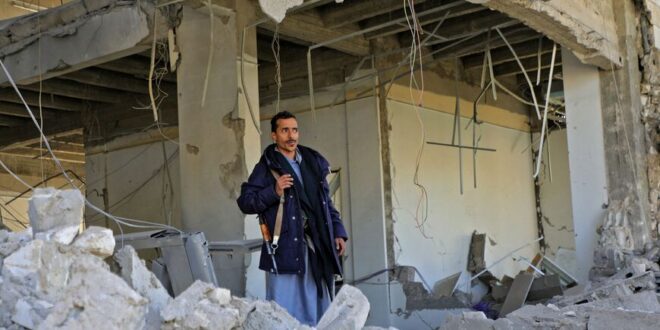 The latest Houthi-related sanctions come as the United Arab Emirates and Saudi Arabia push the Biden administration to designate the Iran-supported group as a terrorist organization.

The US Treasury Department on Wednesday imposed new sanctions on a smuggling network that it said was helping fund Yemen’s Houthi rebels. The designations come as Biden administration mulls whether to re-designate the entire Iran-backed group as a foreign terrorist organization.

According to Treasury’s Office of Foreign Assets Control, the sanctioned network is led by Iran’s Revolutionary Guard and Houthi financier Sa’id al-Jamal, who himself was sanctioned in June 2021. Al-Jamal’s network has allegedly transferred tens of millions of dollars to Yemen through a web of front companies and vessels that smuggle fuel, petroleum and other commodities throughout the Middle East, Africa and Asia.

The sanctioning of 13 individuals, entities and a vessel linked to al-Jamal’s network was done in “close coordination and collaboration with regional Gulf partners,” the department said in a statement.

“The United States continues to work with our regional allies to act decisively against those who would seek to prolong this war for their own ambitions,” said Brian Nelson, Treasury’s undersecretary for terrorism and financial intelligence.

Why it matters: Over the past year, the rebels have stepped up their cross-border attacks on Saudi Arabia, and more recently targeted the United Arab Emirates, which is part of the Saudi-led military coalition that’s fought the Houthis since 2015.

A deadly Houthi attack in Abu Dhabi last month prompted the UAE to publicly call for President Joe Biden to reinstate the rebels’ terror label, which he revoked over humanitarian concerns in February 2021. The Trump administration’s short-lived blacklisting of the group was widely criticized by aid organizations who warned the terror designation would limit their ability to deliver aid in areas controlled by the rebels and produce a chilling effect on importers of vital commodities.

Some background: State Department spokesperson Ned Price said Wednesday that the administration is still reviewing a possible terror listing but that “a number of tools” exist to “hold the Houthis accountable for their reprehensible behavior.”

The administration has already individually designated a number of Houthi leaders and supporters, including: