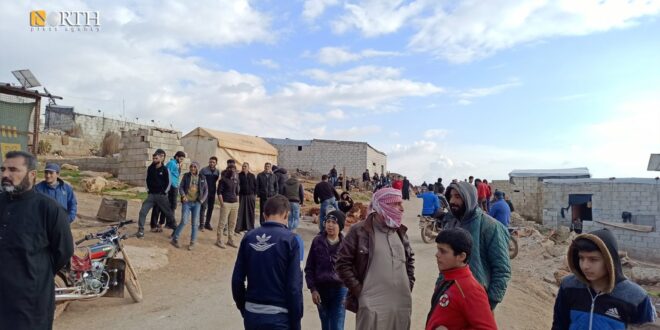 Why anti-HTS Protests Fade Away in Idleb

The HTS is using the same methods as the Syrian regime to repress protests, according to North Press.

People in Idleb city and its countryside, northwest Syria, stage protests against the practices of Hay’at Tahrir al-Sham (HTS-formerly al-Nusra Front) from time to time, but soon the security forces of the HTS would quell the protest in a way similar to the Syrian regime.

The protests in Idleb, especially those that condemn HTS practices, are faced by arrests, threats, and intimidation and are often dispersed with live ammunition. Hence, the protesters do not achieve their demands.

A few days ago, protests in IDP camps in Atmeh were staged after a woman that was smuggling fuel from Afrin to Atmeh camps was arrested. But the protests were faced with live ammunition in an attempt to disperse the protesters causing dismay among the IDPs, especially the children.

Members of HTS stormed the two camps of Umm Shohada’ and Sfuhen, arrested several people, including a media activist, and fired bullets in the air injuring a child in the leg.

On February 17th, members of HTS fired on a group of women and children who were smuggling a few liters of diesel through the Deir Ballout crossing in the north of Idleb. One woman was seriously injured and was hospitalized.

Fears of being chased by the security

The two-day protests faded away as the protesters were fearful of being chased by the security forces especially when they raised slogans reading “Is diesel more precious than our blood?” and “Our blood was shed by the regime and HTS”.

A source close to the injured woman and who preferred not to be named said members of the HTS impose a tight security guard on the woman’s room inside the hospital and deny every media outlet access to her.

Members of the HTS forced the woman’s father to shoot a video, less than an hour after his daughter’s injury, to call his relatives not to interfere in the issue and to leave it to the court, the same source added.

Muhammad al-Omari, a pseudonym for an IDP journalist of Hama countryside who lives in Idleb, said that fears of being chased by the security forces of the HTS prompted the people not to go on with the protests.

The journalist added that in the past, imams of the mosques used to motivate people to stand against injustice but now the imams follow the HTS and they are not free anymore.

On February 17th, the Ministry of Endowments of the HTS’ Salvation Government distributed the Friday speeches in all the mosques in the areas it controls.

The speeches included the importance of the crossings and not to follow sedition and news published on social media. It also called to stop the bloodshed adopting the same policy followed by the Syrian government when it dictated imams to give speeches in its favor, the sources said.