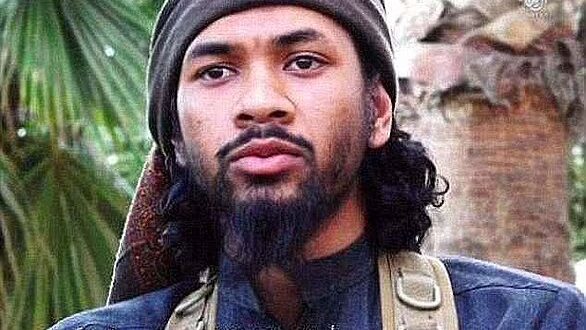 An Australian-born Islamic State terrorist has been released from jail in Turkey but is stuck in immigration detention while he waits to see if any country will accept him.

Melbourne-born Neil Prakash, who was raised a Buddhist, was sentenced to seven-and-a-half years in prison in March 2019.

He was captured by Turkish border guards in October 2016 as he tried to enter the country from Syria, and spent five years in a maximum-security prison in the city of Gaziantep.

Prakash appeared in several propaganda videos for ISIS – encouraging attacks on Melbourne and Sydney – and took up arms for the terror group in Syria.

The former rap singer was also linked to a failed Melbourne plot to behead a police officer and had connections to a number of Australian jihadis.

He was stripped of his Australian citizenship and had his passport cancelled on December 21, 2018.

This action was taken after the Turkish courts refused to extradite him to Australia to face trial.

If he had been sent to Australia, he would have faced charges related to fighting for a foreign country, a crime that could have led to a sentence of life in prison.

The Australian government said it was able to do cancel his citizenship as Prakash was entitled to Fijian citizenship through his father, who was born there, so he would not become stateless.

The 30-year-old’s mother is an Australian of Cambodian descent.

The then Minister for Home Affairs Peter Dutton said the safety and security of Australia was his main priority.

‘This government is determined to deal with foreign terrorist fighters as far from our shores as possible,’ Mr Dutton said.

‘People should recognise if given the opportunity, Mr Prakash would harm and kill Australians,’ he said.

But Fiji has said it will not recognise Prakash’s citizenship, that it has no obligation to take him in, leaving the ISIS terrorist in legal limbo.

Late last year he was moved to another prison in Diyarbakir as he neared the end of his sentence, News Corp reported.

Despite having been stripped of his citizenship, the authorities there registered him as being an Australian.

With time already served, he had become eligible for parole at the end of 2021.

When he was released earlier in February, Prakash was moved to an immigration detention centre in Elbeyli, near Gaziantep Airport.

If he is to leave Turkey, the authorities need to find a country willing to take him.

With neither Australia nor Fiji wanting anything to do with him, that may take some time, despite Prakash having said he regrets his association with ISIS.

A possible third country option for him is if he still has any contact with either of the two women he claimed to have married in Syria.

Prakash may be able to use one of his wives to get citizenship of another state.

NEIL PRAKASH: FROM MELBOURNE BUDDHIST TO ISIS FIGHTER AND RECRUITER

Neil Prakash is born in Melbourne, of Fijian and Cambodian descent. He was raised a Buddhist

His Australian passport is cancelled

Australian federal police issue a warrant for his arrest through Interpol

Prakash publicly praises Numan Haider, the 18-year-old who was killed after stabbing two police officers outside a Melbourne police station in 2014

A Turkish court rejects Australia’s application for his extradition and a judge orders his release. Moments later, he is back behind bars to face local terror charges

Prakash admits he feels ‘regret’ for his participation with Islamic State. ‘I feel regret for joining the Islamic State and for the time I spent with them. I feel repentant,’ he said

He is stripped of his Australian citizenship

Post Views: 77
Previous Free From Islamic State, Many Syrians Leave Raqqa
Next Nobody Wins in the Conflict Over Ukraine