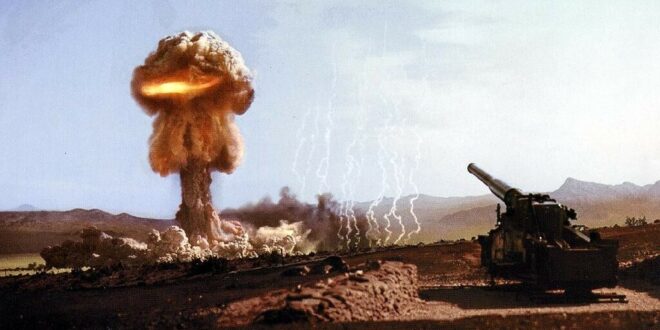 Coming to terms with the nuclear risks of the Ukraine war

The US and Russia both have integrated doomsday weapons into conventional war plans. The risk is low but it isn’t zero.

If you are frightened by the current crisis in Ukraine, you are having a rational response.

We are closer to war between the two largest nuclear-armed states than we have been since the early 1980s. The United States and Russia are not in direct combat, and President Biden has wisely ruled out sending U.S. forces to Ukraine. Nor would either state intentionally launch a “bolt-out-of-the-blue” nuclear attack.

But the United States and Russia are in conflict. While they are carefully choosing which instruments of coercion to apply, they both have developed doctrines of “integrated deterrence” over the past 10 years that integrate nuclear weapons into the coercive options they employ.

This is meant to strengthen deterrence — but it also blurs the firebreak between nuclear, cyber, conventional, and economic weapons. Any miscalculation or misunderstanding could, in the heat of battle or on the brink of defeat, result in the use of one or more nuclear weapons. War games conducted over decades teach us that there is no logical termination point once nuclear war begins.

At least some in Russia also favor using nuclear weapons first in a conflict and some favor using them in a strategy known as “escalate to de-escalate.” That is, if Russia is losing a conventional war against the West, it would use a nuclear weapon first to signal the seriousness of the situation, and force the West to back down. That, of course, is unlikely to be the Western response.

Still, even given those factors, the chance that the conflict will escalate to the nuclear level is low. But it is not zero. That should terrify us.

Most Americans have not thought much about nuclear weapons since the end of the Cold War. But Putin has. He referenced them twice in his speech this week announcing his “special military operation.”

Putin made an explicit nuclear threat to all who dare oppose him, the first in many years issued by a leader of a nuclear-armed nation not named Donald Trump or Kim Jong-un.

“Even after the dissolution of the USSR and losing a considerable part of its capabilities, today’s Russia remains one of the most powerful nuclear states,” he said. “Moreover, it has a certain advantage in several cutting-edge weapons. In this context, there should be no doubt for anyone that any potential aggressor will face defeat and ominous consequences should it directly attack our country.”

The second reference was part of his explanation for why he had to invade Ukraine. “The showdown between Russia and these forces cannot be avoided. It is only a matter of time,” he warned. “They are getting ready and waiting for the right moment. Moreover, they went as far as aspire to acquire nuclear weapons. We will not let this happen.”

Ukraine does not have, nor can it build, nuclear weapons. The charge is absurd. But like claims that Iraq had nuclear weapons or that Iran was racing to get them, he cited the nuclear threat as justification for preemptive action. “Russia cannot feel safe, develop, and exist while facing a permanent threat from the territory of today’s Ukraine,” he said. “We have to take bold and immediate action.”

The leaders of the international nuclear abolition group, Global Zero, said in a statement Thursday, “In a world bristling with thousands of nuclear weapons ready to launch at a moment’s notice, the stakes of any conflict involving nuclear-armed governments are already unacceptably high. Our urgent focus must be on reducing these risks, not further exacerbating them.”

If and when we get through this crisis, we need a long, deep discussion of how we got here. We need to rethink our policies of the past 20-30 years. How could we have prevented this crisis? What could we have done to reduce the nuclear risks? Did we squander our “unipolar moment”?

Finally, why didn’t we act on the call issued in 2007 by George Shultz, William Perry, Sam Nunn and Henry Kissinger? They warned that unless we moved step by step to reduce and eventually eliminate nuclear weapons, we would “be compelled to enter a new nuclear era that will be more precarious, psychologically disorienting, and economically even more costly than was Cold War deterrence.”

We are now in that world.

Post Views: 97
Previous Now is not the time to demand bigger military budgets
Next Why arming Ukrainian ‘resistance fighters’ would be a really bad idea