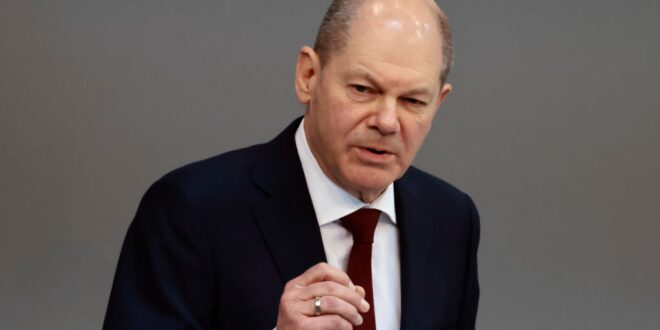 The measures represent a complete reversal of Germany’s post-Cold War Russia policy — which focused on pursuing economic ties rather than confrontation with Moscow — and mark a definitive end to the era of former Chancellor Angela Merkel.

“We are living through a watershed era. And that means that the world afterwards will no longer the same as the world before. The core question is whether power is allowed to prevail over the law. Will we allow Putin to turn the clock back to the 19th century and the age of great powers? Or can we muster the strength to keep warmongers like Putin in check. That requires strength of our own. Yes, we fully intend to secure our freedom, our democracy and our prosperity.” — German Chancellor Olaf Scholz, Bundestag, February 27, 2022.

The significance of the German U-turn cannot be overstated: Germany will become the biggest spender on defense in Europe.

In a major policy reversal, the German government has also decided to suspend technical certification of the controversial Nord Stream 2 pipeline, which would double shipments of Russian natural gas to Germany by transporting the gas under the Baltic Sea.

“I have to say I don’t recognize Europe as it responds to Putin’s gangsterism against #Ukraine… all of a sudden I see the Continent grow a spine. Way to go!” — Andrew Michta, veteran transatlantic security analyst.

“Watching Scholz in Bundestag today is watching decades of German foreign policy change in a few minutes before your eyes.” — Andrew Gray, politics editor for Politico.

“Putin knew well why he invested so much in friendly relations. Germany was open to that. But the attack on Ukraine changed everything. Comes certainly as a shock to Putin.” — Ulrich Speck, German foreign policy analyst.

“It is hard to overestimate how much Putin’s attack on Ukraine changed Germany. Less than a week ago Nord Stream 2 was still alive, delivering lethal weapons to Ukraine taboo & cutting Russia out of Swift out of the question. Putin’s invasion changed Germany. Turning point.” — Michael Knigge, German journalist.

“Germany basically doing what Donald Trump demanded that they do — to widespread ridicule — for the four years of his Presidency. I know it galls people to hear it, but Trump was right about some very big things.” — John McGuirk, Irish political commentator.

German Chancellor Olaf Scholz has announced a paradigm shift in German defense and energy policies in response to Russia’s invasion of Ukraine. He said that Germany will substantially increase defense spending and take immediate measures to reduce its energy dependence on Russia.

Scholz has also announced several other important policy reversals: Berlin has halted the controversial Nord Stream 2 pipeline, which would double shipments of Russian natural gas to Germany by transporting the gas under the Baltic Sea; it has agreed to authorize the transfer of weapons to Ukraine; and it has decided to ban Russian banks from the SWIFT international payment system.

The measures represent a complete reversal of Germany’s post-Cold War Russia policy — which focused on pursuing economic ties rather than confronting Moscow — and mark a definitive end to the era of former Chancellor Angela Merkel.

During an extraordinary session of the Bundestag, the German parliament, on February 27, Scholz said that Russia’s aggression against Ukraine marks a turning point in European history:

Scholz’s vow to raise defense spending above 2% of gross domestic product (GDP) represents a sharp reversal from previous German policy, which has been to free ride on the U.S. defense umbrella. The significance of the German U-turn cannot be overstated: Germany will become the biggest spender on defense in Europe.

At the 2014 Wales Summit of the North Atlantic Treaty Organization (NATO), allies agreed to spend a minimum of 2% percent of their GDP on defense, but Germany — the biggest economy in the EU and the fourth biggest in the world — has consistently refused to honor that pledge. In 2021, Germany spent only 1.5% of GDP on defense, according to NATO data, which also shows that German defense spending increased by less than 0.5% of GDP since 2015.

The German armed forces (Bundeswehr) are in an especially sad state of disrepair. On February 24, the highest-ranking officer in the German Army publicly lamented that years of financial neglect had rendered the army unable to respond to Russian aggression in Ukraine. Chief of the Army Lt. Gen. Alfons Mais wrote:

A damning report published by the German Parliament in January 2019 found that critical equipment was scarce, and that readiness and recruitment were at all-time lows. “No matter where you look, there’s dysfunction,” said a high-ranking German officer stationed at Bundeswehr headquarters in Berlin. Later that year, the Bundeswehr grounded all 53 of its Tiger attack helicopters due to technical faults.

A May 2018 report by the German magazine Der Spiegel revealed that only four of Germany’s 128 Eurofighter jets were combat ready. Germany’s obligation to NATO requires it to have at least 80 combat-ready jets for crisis situations.

At the end of 2017, not one of the German Air Force’s 14 large transport planes was available for deployment due to a lack of maintenance, according to the German Parliament. In October 2017, a spokesman for the German Navy said that all six of Germany’s submarines were in the dock for repairs. In February 2015, Germany’s defense ministry admitted that its forces were so under-equipped that they had to use broomsticks instead of machine guns during a NATO exercise in Norway.

Much of the blame falls on former German Chancellor Angela Merkel. During her 16 years in office, she was content to free-ride on the U.S. defense umbrella. Successive American presidents unsuccessfully pressed Merkel to increase German defense spending. Former U.S. President Donald Trump was especially adamant that Germany pay its fair share:

Scholz said that the 100-billion-euro fund (equivalent to $115 billion) would immediately be used to modernize the military and purchase cutting-edge weaponry. To put that into perspective, the German defense budget in 2021 was 47 billion euros ($55 billion).

Specifically, Scholz announced that Germany would buy state-of-the-art Heron drones from Israel and F-35 warplanes from the United States. He also pledged to strengthen NATO’s nuclear deterrent against Russia. In addition, Scholz said that Germany, in cooperation with other European countries, would build “the next generation” of combat aircraft and tanks.

Scholz also announced a series of measures to lessen German dependence on Russian energy supplies. He said that Germany would build up strategic energy reserves and increase the storage volume of natural gas by two billion cubic meters, which amounts to a supply of approximately ten days. Scholz added that Germany will purchase additional natural gas on world markets and he vowed to “quickly build” two liquid natural gas (LNG) terminals at ports in Brunsbüttel and Wilhelmshaven near the North Sea.

In another policy reversal, the German government suspended technical certification of the controversial Nord Stream 2 pipeline, which would double shipments of Russian natural gas to Germany by transporting the gas under the Baltic Sea.

The leaders of many Central and Eastern European countries — including Bulgaria, the Czech Republic, Estonia, Greece, Hungary, Latvia, Lithuania, Poland, Romania, Slovakia and Ukraine — are opposed to the pipeline, which they argue will effectively give Moscow a stranglehold over European gas supplies and open the continent to Russian blackmail.

Both the Obama and Trump administrations opposed the pipeline — which is fully owned by Russia’s state-owned energy company Gazprom — on the grounds that, once completed, it would strengthen Putin’s economic and political influence over Europe.

In July 2021, the Biden administration abruptly reversed the long-standing bipartisan policy consensus and announced that the U.S. was no longer opposed to the pipeline. The move was ostensibly aimed at extending an olive branch to then German Chancellor Angela Merkel. On February 25, a day after Russia invaded Ukraine, Biden reversed his earlier decision and reimposed sanctions on Nord Stream 2.

Scholz has faced intense political pressure to halt Nord Stream 2, but it remains to be seen if his decision will be permanent or temporary. The €9.5 billion ($10.8 billion) pipeline has already been built — construction was completed in September 2021 — and technical and regulatory certification was expected to be finished by August 2022. If or when Russia-Ukraine tensions ease, the German government will probably face economic pressure to certify the pipeline and make it operational.

Meanwhile, in an even more shocking policy reversal, German Energy Minister Robert Habeck said that he was considering extending the life-span of Germany’s remaining nuclear power plants as a way to secure the country’s energy supply. Habeck is a member of the Greens party, which has always been opposed to nuclear energy.

There are long-term solutions to Germany’s energy dependence on Russia. The United States, for instance, could supply a large portion of Germany’s demand for fossil fuels if the Biden administration would reverse current policies that restrict the exploration, development and export of American oil and gas. Those policies are economically and geopolitically harmful to both the United States and its allies in Europe.

In another historic about-face, Scholz, under massive public pressure, agreed to deliver arms to Ukraine directly and through third countries. The move reverses longstanding German policy on arms transfers to conflict zones.

Scholz announced that Germany would be sending 1,000 anti-tank weapons and 500 Stinger missiles directly to Ukraine. He also removed restrictions that prohibited third countries from transferring German-made weapons to conflict zones. The move will allow the Netherlands, for instance, to transfer 400 German-made rocket-propelled grenade launchers to Ukraine.

German policy has bordered on ridiculousness. Up until just a few days ago, the German government prohibited Estonia from transferring Soviet-made D-30 howitzers to Ukraine. The cannons, which entered into service in the 1960s and were originally stationed in former East Germany, were subsequently exported to Finland and then to Estonia after German reunification. Germany has now granted Estonia permission to send those weapons to Ukraine.

In yet another policy shift, Germany agreed to cut some Russian banks out of the SWIFT — the Society for Worldwide Interbank Financial Telecommunication — global payment system. The move — coordinated with G7 members Canada, France, Italy, Japan, the United Kingdom and the United States — limits the ability of Russia’s central bank to support the ruble, which has fallen to historic lows against the euro and the U.S. dollar.

The ban, which blocks sanctioned banks from transferring money in and out of the country, exempts energy transactions. The aim, apparently, is to cripple Russia’s banking network without disrupting energy flows from that country. American commentator Andrew McCarthy explained the paradox:

Germany’s decision to reverse its longstanding appeasement of Russia has been greeted with a mix of disbelief, relief and praise. It has been variously described as “a revolution,” “a full paradigm shift,” “a change of mentality,” “a fundamental rethink,” “a fundamental turn,” “utterly extraordinary,” “a big step,” “a major shift,” “a historic policy shift,” “a historic announcement,” “an astonishing reversal,” “a game changer,” “a truly historic moment,” “a breath-taking turnaround,” “a great relief,” “a watershed moment,” “a 180-degree turnaround,” “a massive U-turn,” “a critical turning point,” “nothing short of extraordinary, and “this is huge.”

Commentator Wolfgang Münchau, in an analysis for the Eurointelligence news outlet, wrote that the policy reversals announced by Scholz are a good start, but following through on them will prove difficult:

Commentator Thomas Sigmund, in an essay for the German financial newspaper Handelsblatt, wrote that the Merkel era is finally over:

Writing for the influential German blog Tichys Einblick, George Gafron noted that words must be followed-up by deeds:

Post Views: 182
Previous Why arming Ukrainian ‘resistance fighters’ would be a really bad idea
Next Opponents Of Hay’at Tahrir Al-Sham (HTS): Ukraine War Disproves HTS Claim That Russian Army Is Powerful, Which It Used To Justify Its Treachery