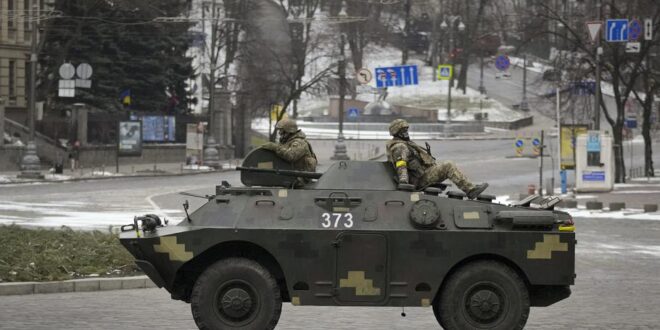 Pentagon: 80% of Russian forces positioned around Ukraine now in the country, but supply issues slow their advance

Roughly 80% of the more than 170,000 troops Russia had surrounding Ukraine for months before invading are now inside the country, though the Ukrainian resistance and supply issues have slowed their advance, a senior U.S. defense official said Tuesday.

Russian forces advancing toward Ukraine’s capital of Kyiv “has made no appreciable movement” since Monday when they were approximately 15.5 miles from the center of the city, said the official who spoke on condition of anonymity.

The Ukrainian resistance and Russian supply issues with fuel have been slowing movement for days, though the official said the U.S. is now “picking up signs that [Russia is] having problems feeding their troops.”

The U.S. also believes Russia has exhibited a certain “risk aversion” for its troops, the official said, noting Russia is “not necessarily willing to take high risks with their own aircraft and their own pilots” or their ground forces.

“Take the amphibious assault for instance, they put those troops ashore a good [43 miles] away from Mariupol because they knew Mariupol was going to be defended and they [couldn’t] put them ashore in an uncontested environment. And they still haven’t reached Mariupol,” the official said.

The U.S. has seen significant numbers of Russian troops — some of whom are Russian draftees — surrendering in Ukraine “sometimes without a fight,” the official said. “A lot of these [Russian] soldiers are conscripts [who have] never been in combat before. Some of them, we believe, weren’t even told they were going to be in combat.”

However, the pause Tuesday toward Kyiv could partially be deliberate as Russian troops “are possibly regrouping, rethinking and reevaluating” their approach, the official said.

“We don’t know exactly why [Russia is] having the logistics and sustainment problems,” the official said. “Was it a failure of planning and pre-positioning or has it been a failure in the execution? There could be lots of reasons for this, not to mention the [Ukrainian] resistance.”

Though the Russian forces have not advanced as fast as the U.S. believes Russia intended, the official urged the public to remain “pragmatic” and mindful that Russia still has “a lot of power available to them.”

The Russian Defense Ministry on Tuesday warned civilians to leave Kyiv as it plans strikes on Ukrainian military and security facilities in the capital city, according to the Russian state-owned TASS media outlet.

“In order to thwart informational attacks against Russia, [Russian forces] will strike technological objects of the [Security Service of Ukraine] and the 72nd [Center for Information and Psychological Operations] in Kyiv,” the ministry said.

The announcement could indicate a hardened Russian military strategy to come, the U.S. official said.

“This is war. It’s dynamic. We can expect to see them change their approach,” the official said. “In fact, I would argue that the Russian Defense Ministry’s threatening statement today that they’re going to start going and attacking government infrastructure in Kyiv is indicative of a change here.”

Since the start of the war Thursday, the U.S. has detected 400 launches of short- and medium-range cruise missiles, the official said.

About 285 miles to the east of Kyiv, heavy fighting continues in Ukraine’s second-largest city of Kharkiv as the U.S. believes Russia aims to encircle that city, the official said. On Tuesday morning, a Russian missile strike destroyed a government building in the city’s Freedom Square.

Ukrainian President Volodymyr Zelenskyy during a speech to the European Union called the strike, which occurred away from Ukrainian military locations, an act of “frank, undisguised terror” and a “war crime.”

“We are fighting just for our land and for our freedom,” Zelenskyy said. “Every square of today, no matter what it’s called, is going to be called Freedom Square, in every city of our country. Nobody is going to break us.”

In southeastern Ukraine, Russian troops are “still outside Mariupol … but they are close enough now that they could attack Mariupol with long-range fires,” the official said.

Throughout the country, neither the Russians nor the Ukrainians have been able to secure the airspace since the war began.

“The airspace over Ukraine continues to be contested,” the official said. “The Russians do not have air superiority over the entire country, but there are areas where they have more control than others.”

Ukrainian officials for days have pleaded for the U.S. and other NATO nations to enforce a no-fly zone over Ukraine as Russia continues to contest the airspace. However, the defense official said there has been no talk at the Pentagon of doing so as President Joe Biden insists no U.S. forces will fight in Ukraine.

“The president of the United States — the commander in chief — said we’re not going to be fighting in Ukraine and certainly if you were to enact a no-fly zone, that puts you in the fight,” the official said.

Also Tuesday, NATO announced it would not allow its airspace to be used to move donated military planes to Ukraine after a top European Union official on Monday said some countries were ready to provide fighter jets to the country.

The decision comes as Ukraine has requested additional military equipment from Western countries to help it fight for its sovereignty. The U.S. has provided about $1 billion is security assistance to Ukraine during the past year, including Javelin anti-tank missiles and other ammunition.

The U.S. has also sent about 14,000 troops to Eastern Europe to support NATO allies near Ukraine. About 4,700 of them were sent to Poland, some of whom are assisting in the evacuation process, the Pentagon has said.

So far, U.S. troops have not had to lend much effort to the evacuation mission. About 70 Americans have fled Ukraine across the border into Poland since Monday while about 500,000 Ukrainians have fled or tried to flee their country, the official said.

“[There has been] no major impact on our troops or any need for our troops to assist them,” the official said. “[Any] assistance has been pretty minor just in terms of food, water, a place to sit down and … some internet access,” the defense official said.

Defense Secretary Lloyd Austin has not decided how long he will keep U.S. troops deployed to the region, but “is committed to being able to help using the DOD as much as we’re needed,” a senior defense official said Monday.

Post Views: 108
Previous Wrecking The Russian Ruble: US, EU, And Japan To Ban Certain Russian Banks From SWIFT
Next No fighter plane transfers to Ukraine through allied airspace