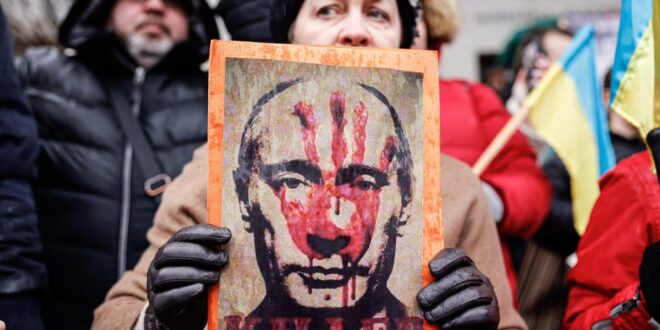 Inside Vladimir Putin’s criminal plan to purge and partition Ukraine

As Vladimir Putin’s invasion of Ukraine continues to escalate, many are asking what the Russian dictator ultimately hopes to achieve. During his March 3 phone call with French President Emmanuel Macron, the Russian ruler made clear that he is committed to taking full control of Ukraine and “neutralizing” the country. Following their conversation, Macron warned that “the worst is yet to come.”

A detailed and presumably regime-sanctioned article published simultaneously by a number of Kremlin-linked news sites on February 26 offers a window onto what Putin’s end goal in Ukraine might look like. The article lavished praise on Putin for taking the decision to resolve the “Ukrainian question” for future generations. Due to the setbacks faced by Russian forces in Ukraine during the first days of the invasion, the article appears to have been deemed premature and was subsequently deleted but can still be accessed in archive format.

The picture that emerges from this chilling text is of the complete military conquest of Ukraine followed by a partition and a massive purge of the civilian population. Putin’s apparent objective is to eradicate all vestiges of Ukrainian identity while condemning the country to a grim future as a military dictatorship locked firmly inside a new Russian Empire. This nightmarish vision tallies closely with Putin’s own stated objectives for the current military campaign along with his long record of public contempt and animosity towards Ukrainian statehood.

Ever since he first came to power at the turn of the millennium, Putin has worked towards entering Russian history as a “Gatherer of Russian Lands.” His first task was to end the process of disintegration that began in 1991 by waging a brutal Second Chechen War. Crimea and Belarus were gathered in 2014 and 2020 respectively. Now it is Ukraine’s turn. As the recent article explained, “Russia is restoring its historical fullness, gathering the Russian World, the Russian people together in its entirety of Great Russians, Belarusians, and Little Russians.”

Putin aims to establish a new loyalist regime in Ukraine led by a Russian puppet resembling Belarus dictator Alyaksandr Lukashenka. After British intelligence leaked details of a plot to appoint pro-Kremlin Ukrainian politician Yevgenny Murayev, these plans appear to have been revised. There is now talk of Moscow seeking to install former Ukrainian president Viktor Yanukovych, who was stripped of his powers by Ukrainian MPs during the 2014 Euromaidan Revolution and fled Kyiv for Russia. This would be entirely in keeping with Kremlin propaganda, which has insisted for the past eight years that Yanukovych was illegally removed by a Western-backed coup.

Officially, Putin has stated that the objective of his invasion is the “denazification” of Ukraine. This is clearly absurd in a country ruled by a Jewish president where far right parties consistently poll in the low single digits. In reality, he seeks to reverse the nation-building progress Ukraine has made over the past three decades of independence, and in particular during the eight years of conflict with Russia since the 2014 seizure of Crimea.

Putin is openly opposed to the emergence of a strong and independent Ukrainian national identity and accuses today’s Ukraine of becoming an “Anti-Russia.” Rather than acknowledging Ukrainian agency, Putin prefers to blame post-Soviet Ukraine’s rejection of Russia on nefarious Western influence while insisting that the country naturally belongs within the Kremlin orbit as part of the so-called “Russian World.”

Putin’s war has caused global revulsion and turned his country into an international pariah overnight. Why has he taken such a dramatic gamble? The recently published article indicates that he may have felt the clock was ticking and time was against Russia. “Returning Ukraine back to Russia would be more and more difficult with every passing decade. Derussification would gain momentum as would incitement of Ukrainians against Russians.”

This certainly fits with developments in recent years. The Kremlin has reacted with fury since 2014 as Ukrainian leaders have continuously chipped away at Russian soft power. The straw that broke the camel’s back appears to have been President Zelenskyy’s decision to shut down four Kremlin-linked Ukrainian TV channels and charge Putin’s closest Ukrainian ally Viktor Medvedchuk with treason.

If he is able to achieve military superiority and control over Ukraine, Putin’s planned purge will entail rooting out every aspect of Ukrainian national identity which does not support his imperial Russian thesis of Russians and Ukrainians as “one people.” Ukraine’s centuries-long statehood struggle will be erased from the country’s official historical narrative. Instead, the country will revert to its Czarist era identity as “Little Russia.” Needless to say, all talk of Euro-Atlantic integration or European identity will be banished from public dialogue.

Nor is it clear exactly what the borders of a Kremlin-controlled Ukrainian puppet state might look like. Russian officials have repeatedly declared that the issue of Crimea is closed. On the eve of the current war, Putin also recognized the two so-called “separatist republics” of eastern Ukraine as independent states. Kremlin negotiators are reportedly now demanding that Ukraine recognize the loss of Crimea and the separatist republics as part of any peace deal.

Other parts of Ukraine may also be subject to annexation. Putin has repeatedly made territorial claims to large parts of southern and eastern Ukraine, which he argues were erroneously allocated to Ukraine by Vladimir Lenin during the formative years of the USSR. Since the initial outbreak of hostilities between Russia and Ukraine in 2014, Putin has often referred to these lands by their Czarist name of “New Russia.” It is likely that some or all of this territory will be annexed by Moscow if Russia is able to implement its plans for the subjugation of Ukraine.