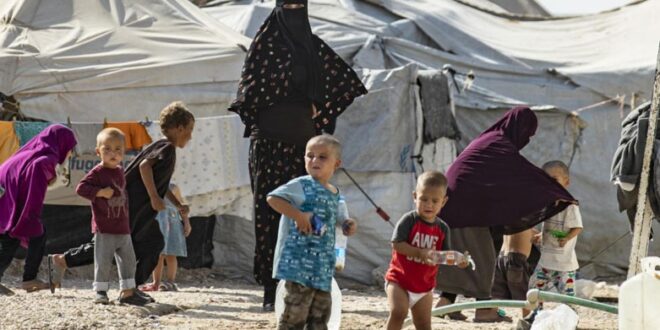 “Last Monday, a group of ISIS cells were planning for a full-scale attack in the camp, and it is possible that this group is the first one to plan for such attacks,” a high-ranking security source told North Press.

“We noticed a crowd of people in the first sector and when the security forces headed to the scene to question the reason for the gathering, ISIS cells started shooting,” the source added.

During the clash, two ISIS members were killed, the report said.

The UK-based Syrian Observatory for Human Rights (SOHR) war monitor also reported that a security member was injured by gunfire from unknown assailants in the al-Hol camp on Monday evening.

The SOHR report said unidentified individuals presumed to be ISIS militants opened fire in the first sector of the al-Hol camp, injuring a member of the Internal Security Forces.

On Feb. 7, a ten-year-old child was killed after unknown attackers attempted to kidnap two guards from camp.

The UK-based SOHR issued an appeal on Wednesday calling on the international community to find an immediate and lasting solution for the crisis in al-Hol camp and rehabilitate the camp’s children and women affected by ISIS’s violent ideology.

SOHR said instead of a refugee camp, al-Hol has become something like a “mini-state” for ISIS-affiliated members and families.

“We, at the Syrian Observatory for Human Rights (SOHR), renew our appeal to the international community to find a lasting solution to ‘Al-Hawl (al-Hol) mini-state’ crisis, which is considered a clear and present danger to everyone,” read the SOHR appeal.

The threat on al-Hol camp follows a large-scale ISIS attack on Hasakah’s al-Sina’a in prison on Jan. 20. Those attackers sought to free 3,000 to 3,500 suspected militants in that prison.

The SDF announced on Jan. 30 that it had fully recaptured al-Sina’a after the remaining ISIS fighters there surrendered after ten days of fighting.