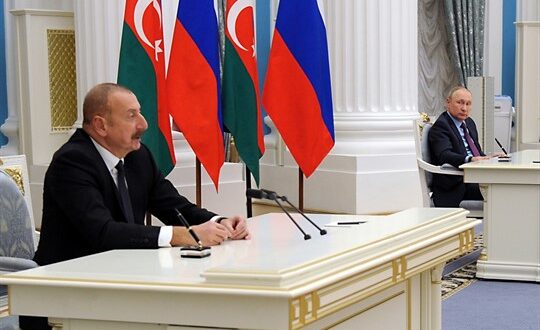 Putin’s War in Ukraine Is Putting Azerbaijan in a Bind

On Feb. 22, Azerbaijani President Ilham Aliyev visited Moscow at the invitation of Russian President Vladimir Putin at what was a sensitive moment—just a day after Moscow officially recognized the independence of the separatist regions of Donetsk and Luhansk in eastern Ukraine, and a day before Russia launched a full-scale invasion of the country.

The main agenda of Aliyev’s visit was to sign a new declaration that upgraded the two countries’ relationship to one of “allied cooperation.” The declaration expresses both sides’ intention of strengthening cooperation across a wide range of fields, including regional security issues, military ties, energy and trade, while calling for mutual consultations on joint efforts in international organizations, with the aim “to protect the interests of Azerbaijan and Russia.” It builds on two previous agreements signed between the two countries in 1997 and 2008 that elevated their relationship to a strategic partnership.

The Shifting Political Hierarchy In The North Caucasus

Since the collapse of the Soviet Union, the South Caucasus has been unable to find …