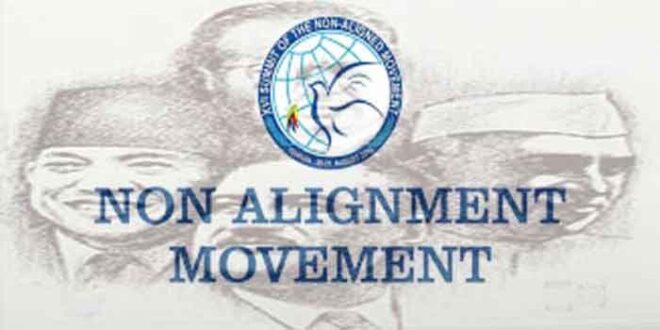 A Strong Case for Resurgence of Non-Alignment Movement

In recent times the world situation has changed very swiftly, with the world getting closer and closer to getting divided between two blocks, one led by Russia and China, and the other led by the USA and its NATO allies. Other countries may face various pressures from one or the other or both power blocks to side with them. As increasingly strict financial and trade sanctions are imposed on Russia, the costs of these sanctions are likely to be shifted also to those countries which had enjoyed completely legal trade, economic and military relations with Russia in the past. In fact some US officials have even been quoted as saying that one aspect of these sanctions is also to increase difficulties of countries like Venezuela, Cuba and Nicaragua.

Most countries of the world will not like to be a camp follower of either one of these two power blocks. They will like to have independent foreign, trade and domestic policies. Such countries will increasingly need the support of each other to avoid the pressures of one or the other or both the power blocks. They will also need more the help and coperation of each other if they face punitive action of any power block, or if the help received earlier by them from the most powerful countries is suddenly withdrawn.

Fotunately the Non-Aligned Movement (NAM) already exists there to provide an important forum to all these countries, and to help them in protecting their legitimate interests from any arbitrary, aggressive, unjustified or unfair actions of the two power blocks. Once again we are reminded of the wisdom of the far-sighted leaders of various countries who in the early days of freedom from colonial rule had taken the initiative towards NAM, understanding even then that such a movement is really needed by most countries for protecting their hard-earned freedom and also for world peace and well-being. Such a movement has been very important for independent and alternative voices other than those of the most powerful countries and blocks being heard and becomig influential.

However at the same time back it is true that the NAM despite having membership of about 120 countries has become weak so that its potential for peace, justice and freedom could not be achieved to the expected extent. Now with the serious crisis situation in Ukraine there is a new reasonance for NAM to be stronger and to play a more effective role in world affairs. The NAM as an unbiased force could have played an important role in resolving issues in Ukraine and finding a solution whereby a policy of non-alignment pursued by Ukraine and confirmed by NAM could have been reconciled with the legitimate secutity interests of the neighboring Russian Fedration.

The arbitrary diversion of 3.5 billion dollars worth of the assets of Afghanistan, a country suffering extreme hunger and deprivation, by the USA government recently has sent shock waves among all people who value justice and legality throughout the world. There is increasing resentment that the arbirary use of sanctions against Iraq by the UN Security Council, led by the USA, led to the loss of several hundred thousand lives, particularly of children, as confirmed in estimates of UN agencies. Similarly misuse of sanctions to impose heavy costs on countries lke Iran and Cuba has been widely resented. A question being increasngly asked is—how prone is the USA to increasingly misuse its special currency and financial strengths, arising from the Bretton Woods agreement, to impose unjust and high costs on those with whom it has serious disagreements or disputes?

At the same time the invasion of Ukraine by Russia is also widely resented by people worldwide, as also the frequent display of aggession towards its neighbors by China. Hence in the new conditions NAM should allow for some changes so that the movement can genuinely emerge as an alternative to both the two major blocks for all those countries which want to be free from various kinds of pressures from the two major power blocks, also do not want to be caught in the confrontations of the two major blocks, and do not want to forced to take sides. The NAM must position itself as a strong voice for freedom, peace and justice in international affairs. In addition it should try to ensure the prioritisaton of the most urgent tasks such as international cooperation for disarmament and protection of envronment.

Post Views: 92
Previous Ukraine Update: U.S. Oil Prices Briefly Soared Above $130 Amid Concerns Of Chaos In Commodity Flows
Next Would a “Cold” War Be the Best News Around?