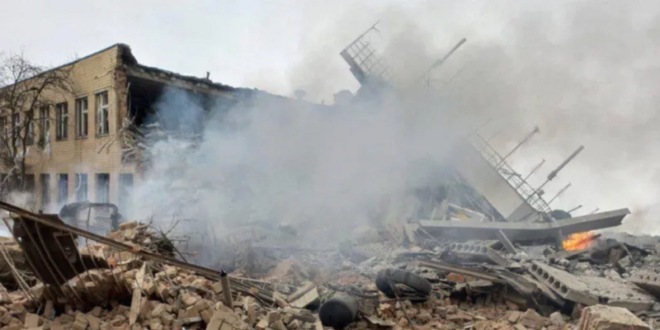 As the Russian forces continue to target and bomb civilian infrastructure and non-combatants as it presses on its invasion of Ukraine, the cities of Vinnytsia and Mariupol had been the subject of Russian advances together with the city of Irpin, which had earlier been reported to be under attack from mortar shells, killing a Ukrainian family with children.

As a result, more war crimes and other violations may be charged against Russia by the International Criminal Court, which had begun a formal investigation into these accusations. Evidence of these crimes is prevalent in the online realm, where social media has played a vital role in documenting and reporting what has been happening on the ground. However, this has also led to massive propaganda initiatives from both sides of the conflict, making it difficult to verify photographs and videos circulating online independently.

Video footage from CNN published last March 7 showed a Russian missile flying towards a Havryshivka International Airport in Vinnytsia, a mere 124 miles from the capital Kyiv. Reports surfaced after revealing that over 8 Russian rockets were launched at the site, destroying the airport’s major structures. The bombardment reportedly killed nine individuals, with six more injured. It’s important to note that these reports could not be independently verified at the time of writing. In response, Ukrainian President Volodymyr Zelensky sent out an urgent video message after the attack.

“8 missiles. Against our city, against our peaceful Vinnytsia, which has never posed a threat to Russia. In any way. They continue total destruction of our infrastructure, our life built by us, our parents and grandparents, generation of Ukrainians,” said Zelensky in his video message.

In an effort to try and persuade their NATO allies, Zelensky used the opportunity to call once more for NATO to impose a no-fly zone over Ukraine. “Close the sky over Ukraine!” he exclaimed. “Close it for all Russian missiles, Russian combat aircraft, for all these terrorists. Make a humanitarian air zone without rockets, without air bombs. We are people, and it is your humanitarian duty to protect us, protect people,” said the President. Zelensky wants a no-fly zone over their country imposed by NATO so that it can be saved from bombing, which had killed hundreds of civilians thus far.

SOFREP reported that a no-fly zone was not feasible according to NATO Secretary-General Jens Stoltenberg as a no-fly zone imposed by NATO allies above Ukraine would mean shooting down Russian aircraft that violate said zone. This would mean that NATO would be participating in the war directly and may be interpreted as an act of war by Russia, which can escalate further into a full-fledged war.

Furthermore, Zelensky asserted that their allies donate fighter jets and aircraft in order for them to defend themselves against a more advanced Russian Air Force, where Ukraine is vastly outnumbered. “If you do not do that, if you at least do not give us aircraft for us to be able to protect ourselves, there can be only one conclusion: You also want us to be slowly killed,” he boldly claimed.

As earlier reported by SOFREP Editor-in-chief Sean Spoonts, the United States was reported to be working with Poland to transfer MiG-29 Fulcrums and possibly its SU-22Ms to Ukraine as these are also aircraft that the Ukrainian Air Force is already using or are familiar with. However, Poland said that it would only do this if the US would replace the fighter jets given to Ukraine with new fighter jets from the United States.

The International Committee of the Red Cross (ICRC) blamed both sides for the lack of clear agreement. The Russians have been working non-stop to gain control over the city as it would establish a land corridor to Crimea, which would make troop movement easier for the Russians.

“Amid devastating scenes of human suffering in Mariupol, a second attempt today to start evacuating an estimated 200,000 people out of the city came to a halt,” the ICRC said in a statement.

The situation in Mariupol remains dire and difficult as days of bombardment left the coastal city with no heat, food, water, and electricity. According to the Mariupol city council, a convoy of evacuees could not depart the city because of continued shelling by the Russians despite a ceasefire agreement being in place.

Mariupol City Mayor Vadym Boichenko stressed the importance of evacuating the city’s inhabitants as they were likely to get harmed or killed. Many of the city’s residents have gone underground to seek refuge from the bombardments.

“They will not even give us an opportunity to count the wounded and the killed because the shelling does not stop,” said Boichenko, who made mention of the first attempt to evacuate people from Mariupol.

“They lied to us, what’s more, the moment when people were trying to get out to go to these corridors, the shelling started again,” he said, describing how the Russian shelling destroyed half of a convoy of buses his team prepared for the evacuation.

Perhaps the worst reported loss from the gunfire exchanges in Mariupol was an 18-month old child being shot and killed.

Casualties have been mounting as the battle intensifies, with both sides showing no signs of giving out. Thus, the numbers are expected to keep growing as the Russian invasion enters its third week of fighting. Both sides had reported the number of casualties; however, the count remains fluid as nobody can definitively count the dead accurately at this time.

According to Ukraine, it was reported that the Russian military had lost over 269 tanks, thousands of armored vehicles, several aircraft, and over 11,000 military personnel. This number is highly contested by Russia, claiming that only 498 Russians had been killed five days ago. On the other hand, the UN reported that 406 civilians, including 27 children, died. It was also reported that over 1.7 million Ukrainian refugees had fled their homeland for Central Europe and beyond. The United Nations High Commissioner for Refugees Filippo Grandi has called this exodus “the fastest-growing crisis in Europe since World War II” in a tweet.

To this day, Russia denies any attack on civilian objects and non-combatants. However, despite their rebuttals, a number of independently verified photos and videos circulating online say otherwise. Furthermore, US Secretary of State Antony Blinken, in an interview, stated that the US had received “very credible reports of deliberate attacks on civilians” throughout the weeks of fighting.

Post Views: 77
Previous Tunisian president appoints members of new top judicial council
Next The American Empire Self-Destructs, But Nobody Thought That It Would Happen This Fast