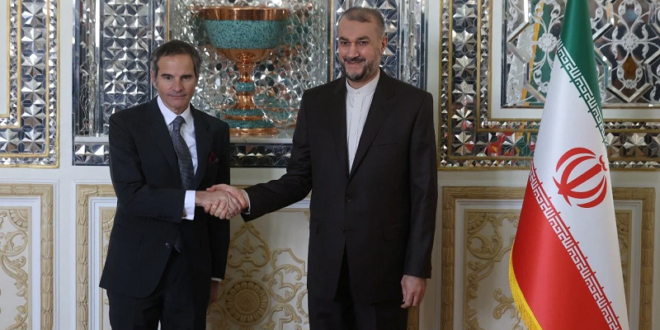 While it does not appear that Russia has become interested in undermining the JCPOA as a whole, dragging out the talks could serve Russia’s interests.

Russia’s military attack on Ukraine has had a number of consequences for Iran, the most important of which have impacted the state of the nuclear negotiations and the energy market. With nuclear talks in Vienna in their final and most critical stages, a return to the Joint Comprehensive Plan of Action (JCPOA) would lead to the lifting of the “maximum pressure” sanctions that were first imposed on Iran under the Trump administration.

After ten months of continuous negotiations between the representatives of Iran, China, Russia, the United States, Britain, France, and Germany, Iranian and American officials have suggested that the talks are nearing their conclusion. Iranian nuclear negotiator Ali Bagheri Kani tweeted on February 16 that “we are closer than ever to an agreement.” Echoing Kani’s optimistic comments, State Department spokesperson Ned Price recently said, “We are in the midst of the very final stages of complex negotiations.”

In such circumstances, the main concern is that the scope of the rifts between Russia and the West due to the Ukraine crisis will extend to the Iranian nuclear talks, possibly preventing the parties from agreeing on the final text of the deal. Jonathan Tirone and Golnar Motevalli of Bloomberg warn that Russia’s attack risks “jeopardizing diplomacy to restore Iran’s nuclear deal at the final hurdle.” However, officials from Russia and the United States have made comments suggesting that negotiations will be able to continue unimpeded.

Mikhail Ulyanov, Russia’s envoy to the Iran nuclear talks, said that there is no “link” between “Iran and Ukraine” in Russian foreign policy. He has also frequently posted images of his meetings with his American counterpart, Rob Malley, that highlight cooperation between Russia and the United States in Vienna. Indeed, Secretary of State Antony Blinken told CBS on March 6 that U.S. sanctions on Russia “have nothing to do with the Iran nuclear deal,” adding that the two issues are not “linked together.” White House press secretary Jen Psaki also said that Russia continues to participate in the nuclear talks with Iran. Nevertheless, there have been many concerns about the consequences of the Ukraine crisis on the nuclear talks.

These concerns grew on Sunday when Russian foreign minister Sergei Lavrov warned that recent Western sanctions against Russia could undermine the final negotiations if exceptions for trade between Russia and Iran are not made. “We want an answer … we need a guarantee that these sanctions will not in any way touch the regime of trade-economic and investment relations which is laid down in the Joint Comprehensive Plan of Action,” Lavrov said. Russia’s new stance was widely criticized inside Iran. An advisor to Iran’s negotiating team, Mohammad Marandi, said that “it is not quite clear what the Russians mean. If it is linked to the actual implementation of the JCPOA, especially with regards to the Iranian nuclear program itself, that is relevant, because the Russians are playing a role in resolving the issue. They will be dealing with enriched uranium and other elements of the nuclear program. We are still waiting for clarification.”

In response to Russia’s demand, Iranian Foreign Ministry spokesman Saeed Khatibzadeh suggested that the negotiating table, rather than media interviews, is where concerns should be raised. The Iranian and Russian foreign ministers then held a phone conversation on March 7 and discussed the possible impact of the Ukraine crisis on the Vienna talks. The reactions and criticisms were more explicit and intense in the Iranian media. Many accused Moscow of using Tehran for leverage over the West and called for direct talks between Iran and the United States in Vienna. On the other hand, Secretary of State Antony Blinken dismissed Russia’s new demands as “irrelevant.” However, there is no doubt that after Russia’s military attack on Ukraine, the United States wants to quickly conclude the nuclear talks with Iran. There are six reasons for this renewed sense of urgency.

First, the West is concerned that as Russia’s war in Ukraine continues, Moscow could use the nuclear talks for leverage. In this case, new obstacles will be added to the negotiations, making it more difficult to reach a final agreement.

Fourth, the failure of nuclear talks with Iran and the continuation of sanctions on Iran would bring Tehran closer to Russia, which has faced widespread Western sanctions in recent weeks. Under such circumstances, Russia could drop some sanctions against Iran and cooperate more closely with Iran, which is also not in the West’s interest. For this reason, some analysts inside Iran point out that if nuclear talks fail, the Western sanctions against Russia will likely lead Moscow to further ignore the consequences of violating U.S. sanctions in its dealings with Iran.

Fifth, an agreement in Vienna would also help stabilize the Persian Gulf, where U.S. sanctions and Iran’s expanded nuclear activities have heightened tensions and fueled proxy wars in recent months. But it is now war in Europe that looms over efforts to achieve a nuclear agreement. As stability in the Middle East and the Persian Gulf will allow the West to focus more on confronting Russia, the West will be motivated to accelerate the outcome of the nuclear talks in Vienna.

Lastly, oil prices reached over $100 a barrel after Russia’s military attack. With this in mind, the conclusion of the nuclear talks with Iran and the lifting of U.S. sanctions would allow Iran to return to the world oil market. As Iran was one of the biggest crude oil producers in the Organization of the Petroleum Exporting Countries (OPEC) before the U.S. withdrawal from JCPOA, its return to the market would reduce the price of oil. Many expect that Iran can increase its daily exports by approximately one million barrels if sanctions are lifted. Indeed, the Iranians currently have large quantities of oil awaiting export. Therefore, an agreement in Vienna and the lifting of sanctions could help control the oil market.

While it does not appear that Russia has become interested in undermining the JCPOA as a whole, dragging out the talks could serve Russia’s interests by providing it with leverage over the West. However, the United States and its partners in Vienna will be motivated to move quickly to finalize a deal with Iran.