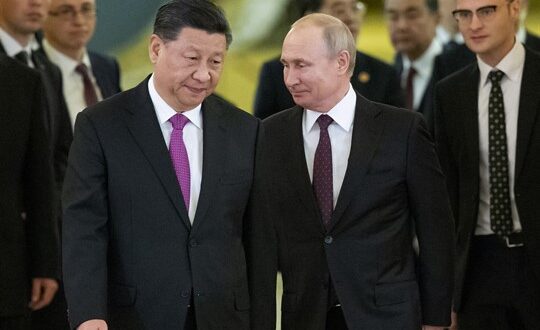 A War-Weakened Russia Has No Strategic Value to China

Scarcely more than a week ago, Chinese social media and the country’s internet were ablaze with quick takes from both prominent commentators and ordinary folks praising Russian President Vladimir Putin’s armed bid to subdue Ukraine, as well as with fervent celebrations of what many in China saw as a toothless reaction from the West.

The responses from Chinese voices like these, more emotional and nationalistic than lucid and analytical, saw in Putin’s defiance of the United States and Europe more evidence of the unstoppable rise of authoritarian states like their own, and of the longed-for decline of the West.

Although commentary on Taiwan is one of the most carefully censored subjects on the Chinese internet, many were also quick to see in the Western rollout of what at first seemed like tentative and piecemeal sanctions—as opposed to an immediate quarantining of the Russian economy or direct Western military involvement—proof that when the moment comes for Beijing to assert the control over Taiwan it has long claimed is its right, China has little to fear from the self-proclaimed democratic world.

Some of this tipsy exuberance can still be found in Chinese online circles even now, sustained mostly by fastidious government censorship of the news, which plays up Russia’s false claims, while showing little of Ukraine’s feisty resistance or the growing popular opposition to the war that has emerged in the streets of cities like Moscow and St. Petersburg. But when one takes a step back from the day-to-day events, the picture for China since the start of this conflict could hardly look more different from the way Putin’s cheerleaders in that country imagined it at the outset of the invasion.

In fair forewarning to readers, this is not going to be one of those pieces that have suddenly become so commonplace about the stirring return of the West under U.S. President Joe Biden’s leadership, after years of decay and doubt about the future of liberal internationalism. Those kinds of takes are nearly as overly hasty and emotional as the early Chinese reactions described above. Still, China’s hand in the ongoing Ukraine crisis looks bad from a variety of perspectives, and there is little point in hiding it.

In one fell swoop, China has eviscerated a bedrock principle of its foreign policy for decades, which upheld national sovereignty as the most sacred of ideas and insisted that no country had the right to interfere or intervene in the affairs of another. This has always only been observed in the breach, but never has the hollowness of Beijing’s supposedly principled stance been on such glaring display. And this has left its diplomats to lamely mouth formulae of whataboutism or the need for negotiated solutions.

Moreover, as China has grown in economic and political power over the past two decades, Europe has drawn closer to Beijing, hoping to reap the rewards of large foreign investment and better trade terms with China. But as Beijing is not displaying a sensitive and realistic understanding of the historic threat that Russia’s invasion of Ukraine poses to Europeans, opinion in Europe—both among publics and in the chancelleries of that subcontinent—will draw hard lessons about where China ultimately stands. These lessons about China’s beliefs and behavior might be summarized as: might trumps right; whatever seems to go against Washington’s interests is best; and when push comes to shove, authoritarians must stand together. And this will cost Beijing in its efforts to consolidate its position as a leading world power going forward.

Ultimately, though, it is with Russia itself that China’s calculations have gone most dramatically awry. No one knows how this war will turn out, but it is not too early to say that the invasion of Ukraine will leave Russia profoundly weaker and poorer. Some estimates suggest that its economy will shrink between 15 and 20 percent over the coming year, while others put the cost of its invasion as high as $20 billion a day. Factor in the political costs to Moscow from a war that most see as criminal and it’s likely that, however the conflict ends, the world’s largest country by surface area, its ninth-most-populous and its 11th wealthiest by GDP will emerge as a shriveled version of its recent self: a weak, isolated and increasingly dysfunctional state.

Even a successful, complete takeover of Ukraine, which I see as unlikely, would do little to alter this. The strengthening of empires through territorial aggrandizement went out of fashion a long time ago, and for a reason: national territorial or even imperial sprawl have little correlation with actual power. Comprehensive national strength in the modern world, in other words, rests far more on foundations of economics and soft power than on physical size.

Why would any of this trouble Beijing? In terms of strategy, Russia’s value to China depends on more than being a mere avatar of authoritarian alternatives to the West or a supplier to Beijing of energy and advanced weapons systems. As much as these, Beijing needs Russia to be powerful enough to distract as much of the West’s attention and capabilities as possible so that the West cannot prioritize or single out China. As China and the West carve out increasingly separate realms for the commercialization of emerging technologies, Beijing also badly needs a partner that is a globally competitive innovator, something that Moscow is clearly not.

If it hasn’t already, Beijing will discover soon that an alliance of two between China and a shriveling power with an economy one-thirtieth the size of its own and incomparably less dynamic—even one propped up by a surfeit of nuclear weapons—isn’t much of an alliance. And this means that China’s homework in trying to find a way out of this crisis without having its own power diminished is just beginning. Beijing’s early, equivocal statements about Ukraine are mere placeholders until China can piece together a position that doesn’t seem so bereft of values. And if China is to protect its true long-term interests, it may have to suspend its recent lovefest with Putin and adopt a more principled stance about the rights and wrongs of his invasion of Ukraine instead.

Post Views: 108
Previous Kazakh-Russian Relations in the Context of the War in Ukraine
Next Sanctioned Russian oligarchs found sanctuary in Britain