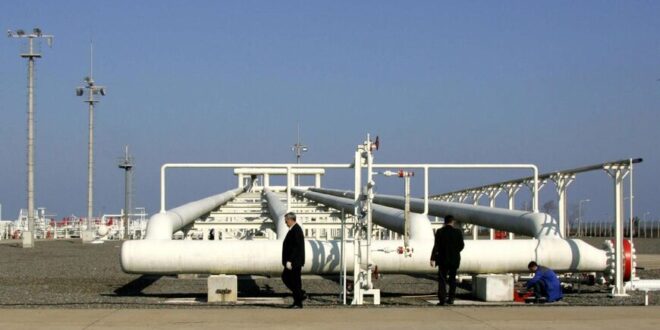 Can Turkey benefit from Europe’s quest to reduce Russian gas?

Europe’s efforts to phase down gas imports from Russia might place Turkey at the center of routes for alternative supplies from Azerbaijan and Israel.

As the European Union scrambles to map out plans to wean itself off Russian gas amid Russia’s invasion of Ukraine, its quest for substitutes might place Turkey at the center of routes for alternative supplies from Azerbaijan and Israel.

The flow of Russian gas and oil to Europe has thus far continued despite a cascade of European and US sanctions targeting other sectors of Russia’s economy after its Feb. 24 invasion of Ukraine. On March 8, however, US President Joe Biden announced a ban on oil and gas imports from Russia, while Britain said it would phase out imports of Russian oil and oil products by year-end. The European Union is unlikely to follow suit with outright bans, given its much bigger exposure to Russian energy supplies.

Russia — the world’s second-largest natural gas producer after the United States and the third-largest of oil — supplies about 40% of Europe’s annual gas consumption and 25 to 30% of its oil needs. The EU alone imports about 150 billion cubic meters of Russian gas annually.

Germany, the EU’s economic powerhouse, hesitated on sanctions in the early stages of the crisis but grew more supportive as Russian forces marched on Kyiv. Nevertheless, German Chancellor Olaf Scholz opposed cutting off energy imports from Russia. The replacement of Russian supplies “won’t happen overnight,” he said March 7 after Washington said it was considering an oil embargo. Germany relies on Russia to meet 55% of its gas needs, 30% of its oil needs and 50% of coal needs.

Last week, the International Energy Agency (IEA) released a 10-point road map to reduce the EU’s gas reliance on Russia. The blueprint is based mainly on lower consumption and substituting Russian supplies with alternative sources, including liquified natural gas (LNG).

In Germany, the crisis has prompted a review of plans to exit coal power by 2038 as part of measures on climate change. Phasing out coal is a core issue for the Green Party, a member of the ruling coalition. Similar reviews are under way in other European countries. Germany has come to debate also an extension to nuclear energy. Three nuclear plants are currently operational in the country, which plans to shut all nuclear plants by the end of 2022.

EU leaders are united on the need to accelerate renewable energy investments and not allow energy scares to forestall climate action. Germany has markedly increased its wind and solar energy capacity, and nearly 30% of the EU’s electricity needs are now met through renewable sources. Yet renewable energy technologies are prone to efficiency drops from drought, wind variability or less sunny days than expected. Last year, for instance, such adverse climatic events, coupled with the rising energy needs of economies emerging from the COVID-19 pandemic, led to a global increase in the gas demand. Gas prices in the EU surged over $1000 per 1000 cubic meters, resulting in a crunch. Buyers on the LNG spot market had to fork out $1,500 per 1000 cubic meters at times.

Given the downsides of renewable sources and the volatility of the LNG market, the EU appears bound to consider new pipelined supplies, which are more stable and relatively less costly. This raises the prospect of two alternatives involving Turkey.

Norway and Azerbaijan are the EU’s two non-Russian suppliers of gas from pipelines. Azerbaijan has a smaller share than Norway and, as the IEA points out, could increase its exports. The sole conduit from Azerbaijan to Europe is the Trans-Anatolian Natural Gas Pipeline (TANAP) via Turkey, which carries 10 billion cubic meters of gas per year. Having stepped up production in recent years, Azerbaijan has already said it is ready to boost supplies via the TANAP.

An additional possibility, though less likely in the short term, is Turkmenistan pumping gas to Europe via Azerbaijan and Turkey by building a new conduit or expanding the existing one. This, however, would require Turkmenistan to increase its production capacity. The country currently produces 62 billion cubic meters per year, using half of it domestically and exporting the other half to China. A similar project to carry Caspian gas to Europe via Turkey to lessen reliance on Russia, called Nabucco, failed a decade ago.

A second alternative is to carry Israeli gas to Europe via Turkey. Israel’s gas reserves are estimated at some 413 billion cubic meters, well above the country’s domestic needs. The East-Med project — an undersea conduit to carry Israeli gas to Europe via Cyprus and Greece — collapsed in January as Washington rescinded its support due to feasibility concerns. The Ukraine crisis could now strengthen the prospect of redrawing the route via Turkey, which would reduce costs.

Incorporating Egypt in the project appears plausible as well. The gas-rich North African country is already involved in gas trade with Israel and sells LNG to Europe and Turkey. An agreement between Israel, Turkey, Egypt and the EU might lead to a pipeline with a capacity above the 10 billion cubic meters per year of the East-Med project.

Russia’s invasion of Ukraine coincided with Turkish efforts to mend fences with regional rivals, including Israel and Egypt. Israeli President Isaac Herzog is scheduled to arrive in Turkey on March 9 for a milestone visit, in which energy cooperation is expected to be high on his agenda with President Recep Tayyip Erdogan.

In sum, European efforts to phase down Russian energy supplies could offer Turkey a fresh opportunity to overcome the deadlocks in its foreign policy, improve its frayed ties with the West and enhance its regional standing. Being both a NATO member and an EU membership candidate makes Turkey a more reliable transit route for gas supplies to Europe. Eventual cooperation on the issue could encourage Turkey and the EU to seek closer ties and even revive Ankara’s membership talks.

Similarly, a long-term energy project involving Turkey, Israel and Egypt could boost trust between the three regional heavyweights and encourage them to resolve their disputes.