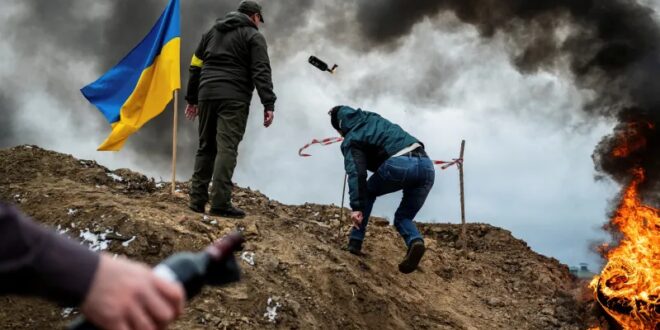 Can the West Save Kyiv Without Starting a War With Russia?

In the months preceding the Russian invasion of Ukraine, as U.S. intelligence agencies warned that Russian President Vladimir Putin was planning an attack, the United States and its allies pursued two strategies in sequence. First, they tried to control escalation. U.S. President Joe Biden made an early and firm commitment not to send U.S. forces to Ukraine in order to reduce the chance of an all-out war with Russia. Then, he turned to a strategy of coercive diplomacy, combining threats with inducements. Biden warned of severe economic consequences if Putin attacked and offered to negotiate with Russia over its security concerns.

That strategy failed the moment Russian tanks rolled across the Ukrainian border. Now, as Russian forces push closer to Kyiv, Western policymakers have two competing objectives. On the one hand, they want to do everything short of committing military force to help Ukraine survive Russia’s brutal and unjustified attack. On the other hand, they want to prevent a full-scale war between Russia and NATO. What makes the challenge so hard is that the more they do to achieve one objective, the less likely they are to achieve the other. Tradeoffs are the norm in foreign policy, but rarely is the choice as stark as it is in Ukraine. It is no surprise that NATO members are struggling to thread the needle.

Consider the question of a no-fly zone, which Ukrainian President Volodymyr Zelensky has urgently requested NATO establish over his country. A no-fly zone would significantly help Ukraine’s embattled forces, but it would also raise the odds that Russian forces might unintentionally or deliberately attack NATO aircraft, which is why members of the alliance have ruled it out. In other words, the United States and its allies face a tough dilemma: how can they protect Ukraine and push back against Russian aggression, but avoid a war with Russia, a country that has the world’s largest arsenal of nuclear weapons?

SPIRALING OUT OF CONTROL
As attacks on Ukraine go on, it is all too easy to imagine scenarios in which NATO and Russia find themselves in a direct conflict that neither side wants. One pathway to escalation involves the convoys coming in from Poland and Romania to resupply Ukrainian forces with anti-tank and anti-aircraft weapons. Russia could attack these convoys in order to choke off the flow of military supplies that are making a significant difference on the battlefield. Although it is not NATO itself that is organizing these shipments but rather individual members, NATO is a collective security organization. An attack against any NATO member is an attack against all. Imagine if a Russian jet bombed French military equipment being unloaded at a base in Romania. Would such an attack justify invoking Article 5, the commitment to collective defense in the NATO charter? That proposition has not been tested, but if NATO leaders concluded that such an attack did justify collective defense, then NATO and Russia would find themselves at war.

Even more alarming are scenarios in which the current crisis could lead to the use of nuclear weapons. In the days immediately preceding the attack and several times since, Russian leaders have spoken about nuclear weapons. Putin has raised the alert of Russia’s strategic nuclear forces twice, and his foreign minister, Sergei Lavrov, warned on March 2 that any war with NATO would be nuclear. So far, Russian forces have not increased their readiness in response to these alerts, and some argue that Russian nuclear threats are nothing more than saber rattling designed to deter NATO from providing the critical military support in the air and on the ground that Ukraine needs. But no member of NATO, especially those in Europe, is willing to dismiss Russian nuclear threats as a bluff and open the door to deadly escalation.

Deterrence at its current level of punishment also doesn’t seem to be working. Sanctions always take time to work; they don’t stop tanks that are rolling. Russia’s leaders have given no indication yet that they are genuinely interested in a ceasefire or negotiations. To the contrary, they are doubling down on their attacks. After his March 3 conversation with Putin, French President Emmanuel Macron said he had concluded that the Russian president was intent on taking all of Ukraine. Battlefield pressures may push Putin to make an offer, but he has made his long-term intentions clear.

TWO ROADS DIVERGED
As public outrage over the invasion grows and civilian casualties mount, NATO countries will have to walk a fine line between deterring Russia and escalating the conflict. There are two ways to think about this problem.

The first draws heavily on well-established theories of rationality and deterrence. The only way to stop an aggressive leader, these arguments go, is to raise the costs of military action and demonstrate unshakable resolve, both in words and deeds. That was how the economist Thomas Schelling saw the Cuban missile crisis. Schelling argued that the standoff with the Soviet Union was a game of chicken, in which two drivers are headed straight toward each other on a narrow road. When you’re playing chicken, Schelling argued, the best strategy is to throw away your steering wheel, so that the other driver sees that you can no longer swerve. That driver now has no choice but to swerve in order to avoid a crash.

Since the war began, NATO leaders have reinforced deterrence. They have warned again and again that any attack on a member of the alliance would be considered an attack against all. They have deployed additional forces to the NATO members that border Russia—Estonia, Latvia, Lithuania, and Poland—as well as nearby Romania. And they have activated the alliance’s rapid response force, a multinational unit of 40,000 troops designed to be deployed quickly if an attack against a NATO member seems imminent. Meanwhile, Western countries continue to deepen the economic sanctions they have imposed on Russia that are causing massive damage to the Russian economy.

The second approach is less familiar to foreign policy analysts but is well supported by evidence from cognitive science. The Nobel Prize–winning economist Daniel Kahneman and the psychologist Amos Tversky demonstrated repeatedly in experiments that when people find themselves anticipating or experiencing serious loss, they are more inclined to exaggerate the likelihood of the loss they face and to make riskier decisions. Putin certainly fits this category. He has called the collapse of the Soviet Union “the greatest geopolitical catastrophe of the century” and considers Ukraine part of Russia’s historical territory. He has repeatedly complained about the betrayal of Russia by the West and what he considers its broken promises. And now, after the unprovoked and brutal aggression against Ukraine that he initiated, Putin has railed against the strangulation of Russia’s economy that has occurred as a result of the sanctions imposed by the United States and its allies. As Putin’s speeches during the crisis make clear, this is a man whose sense of loss has only deepened.

It is precisely under these conditions that psychologists expect people to make risky decisions. If they are right, then Putin is more likely to choose the risky path of further escalation than to pull back in the midst of a campaign that is proving far more difficult than he expected. NATO members are desperately trying to avoid escalation, but their strategy of doubling down on deterrence could increase the likelihood that Putin, an angry leader who feels cornered, will escalate. Paradoxically, a strategy designed to induce restraint could provoke escalation.

WHAT NOW?
These two competing roadmaps suggest very different strategies. How can Western leaders manage the contradiction? A comparison of historical cases suggests that the sequencing of strategies can make a difference. Demonstrate toughness and resolve first, and only after NATO has established its commitment, pivot to offering inducements to Putin to create incentives for him to de-escalate and negotiate. There is compelling logic to this kind of strategy, but it involves a big gamble on timing. If NATO waits too long to offer inducements, then Putin escalates. And no one, except for Putin himself, knows how long is too long.

Another way to manage these contradictions is to use back channels to Putin to explore opportunities for de-escalation. Logical candidates for credible interlocutors include either other countries, such as China, Israel, or Turkey, or a private individual, someone who has a long-standing personal relationship with Putin. Establishing a private channel would not only send a message to Putin that NATO is open to negotiation if he stops the fighting but would also give leaders plausible deniability if their efforts were rebuffed. As painful as this is to contemplate, these offers would have to signal a willingness to lift some sanctions in response to de-escalation. Just as threats must be connected to behavior that leaders are trying to prevent, so must inducements be calibrated to behavior that they are trying to promote.

There are risks, of course, to signaling openness to negotiation. It is always possible that Putin could interpret this as a sign of weakness and escalate. That is exactly what advocates of deterrence would argue. But the Biden administration may be willing to take that risk. The White House has suggested that it is worried about uncontrolled escalation—for example, deliberately canceling a nuclear test scheduled for the first week of March in order to avoid any misinterpretation by Russia. It would be surprising, then, if the Biden administration were not already tacitly encouraging approaches through back channels.

NATO countries will have to walk a fine line between deterring Russia and escalating the conflict.
There are grave political risks for leaders who seek to control escalation. Putin’s barbarous invasion has generated a wave of outrage across the world. The justifiable anger at the bombardment of civilians narrows the political space that leaders have to explore how to end this war. It will take courage for leaders to speak publicly about the risks of escalation, not only to Ukrainians who are already suffering thousands of casualties but also to the many thousands of others who will suffer if this war escalates and spreads to NATO members. Some will inevitably label leaders who make that case as appeasers. But trying to control escalation in a grossly unequal fight where the dominant power has nuclear weapons is not appeasement.

There are only a few possible ways the Russian attack can end. Ukraine could hold off further Russian advances at the cost of terrible civilian casualties but still remain geographically divided. Putin could also negotiate a ceasefire and leave a rump Ukraine in the western part of the country. Alternatively, he could subjugate all of Ukraine and then face an ongoing insurgency. It is even possible (although very unlikely) that he could be removed in a palace coup. Finally, Putin, cornered, could escalate and widen the war.

In the coming days and weeks, leaders will have to balance the risks of doubling down on deterrence against the risks of deadly escalation. No one should be confident that they know what Putin will do. Prudence dictates that the United States and its fellow NATO members try above all to avert the escalation of a war that could kill untold numbers of civilians far beyond the borders of Ukraine, in addition to tens of thousands of Ukrainian civilians. NATO has already acknowledged that there is a ceiling to the support it can offer Ukraine, given that avoiding escalation is so important; the alliance cannot break through that ceiling and avoid a dangerous war with Russia. That is not fair to Ukraine, a country that has, against all odds, held off an unprovoked and brutal attack by Russia. Not for the first time, international politics is forcing hard choices.

Post Views: 179
Previous How to Stop a New Nuclear Arms Race
Next Will Putin Lose Russia?