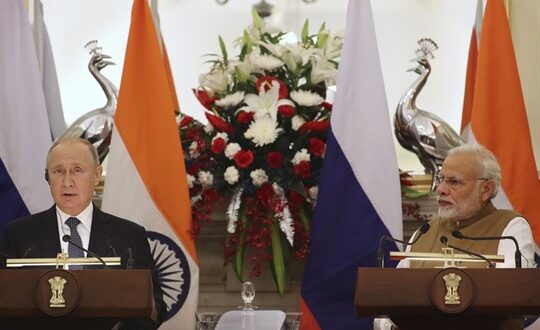 Since the Russian invasion of Ukraine, India—which is currently a nonpermanent member of the United Nations Security Council—has drawn scrutiny for having abstained multiple times on votes in the Security Council, U.N. General Assembly and U.N. Human Rights Council on resolutions criticizing the Russian aggression. Instead, the Indian Mission at the United Nations issued a nuanced statement calling for an “immediate cessation of violence” in Ukraine, without publicly condemning Russia’s actions—a move that pleased neither its Western partners nor Russia.

The Russian-Ukraine war puts India in a difficult position. On the one hand, India wants to avoid antagonizing the U.S., a long-time partner with which it has multifaceted and deepening ties. On the other, ongoing tensions with Pakistan and China require India to preserve its relationship with Russia, which is one of New Delhi’s leading suppliers of weapons and defense equipment.

Although the Biden administration has avoided any public criticism of India’s stance over Ukraine, its disappointment over New Delhi’s repeated failure to condemn President Vladimir Putin’s actions is palpable. American officials have identified India as a reliable U.S. partner in Washington’s Indo-Pacific strategy to counter China, and they clearly expected more from India in view of their emerging strategic alignment.

Soon after the recent virtual meeting of the leaders of the Quadrilateral Security Dialogue—or the Quad, comprising the U.S., India, Japan and Australia—on March 3, Kurt Campbell, the White House policy coordinator for the Indo-Pacific, stated that while the U.S. understands New Delhi’s “historic, long-standing relationship with Russia,” there was hope that “India will be moving in our direction.”

Derek Chollet, a senior policy adviser to U.S. Secretary of State Antony Blinken, remarked in a recent interview that the U.S. hoped India would bring its “influence to bear on Russia to get them to change course.”

But this is unlikely, for several reasons. Indian scholars and policymakers often argue that U.S. leaders do not understand the geographical factors driving other countries’ strategic calculations, perhaps because the United States has a natural advantage when it comes to geography, with no threats on its immediate land or maritime borders. By contrast, India must manage ongoing tensions with nuclear-armed powers on two borders, with China to the north and Pakistan to the west.

New Delhi’s current balancing act on the war in Ukraine must therefore be understood in the context of the role that Moscow has historically played in helping India counter both China and Pakistan. Russia emerged as India’s primary defense supplier during the Cold War, when the West was reluctant to share technology with India and the Soviet Union helped build India’s industrial base, especially in the defense sector.

Russia remains one of India’s top arms suppliers, and 70 percent of India’s military arsenal is still of Russian origin. Between 2016 and 2020, Russia accounted for 49 percent of India’s arms imports, which in turn constituted 23 percent of Russia’s arms exports. Russian manufacturers have also offered their top-of-the-line weapons systems to India when U.S. companies have held back.

For instance, when India first considered purchasing the Russian S-400 missile defense system, the U.S. was slow to propose a comparable alternative. When it did eventually offer India the Terminal High Altitude Area Defense, or THAAD, and Patriot Advance Capability, or PAC-3, missile defense systems, the price tag was $15 billion. India ended up paying Russia a third of that when it finalized the S-400 deal in 2018, risking U.S. sanctions under the Countering America’s Adversaries Through Sanctions Act, or CAATSA, to do so.

Similarly, when India planned to modernize its air force, its preferred option was the U.S.-made next-generation F-35 fighter. It was disappointed when all that Washington was willing to offer was instead the older F-16. New Delhi bought Rafale fighter jets from France instead.

In these and other cases, Washington’s unwillingness to transfer technology has been a major stumbling block in military relations with India. Cost is another factor.

The dollar value of India’s defense trade with the United States, which went from almost zero in 2008 to $20 billion last year, now far outstrips the military equipment it imports from Russia. And as India tries to upgrade its weapons systems and aircraft, it will find Russian technology less desirable than U.S., French and Israeli alternatives.

But in the meantime, Russia’s cheap equipment and its willingness to share technology remain attractive amid an Indian defense acquisition process that Western companies find to be labyrinthine.

Apart from India’s need to maintain its security relationship with Russia, there are other strategic considerations at play in its current position on the war in Ukraine. While the U.S. is now waking up to the prospect of peer competition with China, India has always seen China as a threat. And it is in India’s interest to ensure that Russia does not side with China in India-China disputes.

This careful diplomatic tightrope is nothing new for India. As part of its desire for strategic autonomy, New Delhi has often maintained relations simultaneously with countries that are antagonistic toward one another—Iran and Israel, for instance, as well as Iran and the Arab Gulf States. Russia and the United States can now be added to that list.

Nor is this the first time India has tried to avoid taking sides in conflicts, going back to the Soviet invasions of Hungary in 1956 and Afghanistan in 1979. Even in 1990, when Iraqi dictator Saddam Hussein invaded Kuwait, New Delhi ignored requests by Kuwait that “the great nation of India” condemn the invasion and refused to go beyond “deploring” the move.

India did not want to upset Hussein, notwithstanding the moral and legal case against his aggression. Iraq was one of India’s key suppliers of oil and a major market for Indian exports at the time and had supported India rather than Pakistan on the Kashmir dispute at the Organization of Islamic Countries. Then-External Affairs Minister I.K. Gujral was even photographed giving Hussein a bearhug in Baghdad in August 1990, soon after the start of the Iraqi invasion of Kuwait.

It took years for New Delhi to repair the damage its stance on the invasion of Kuwait did to India’s relations with the Arab Gulf countries. Indian diplomats seem prepared, once again, to risk hurting New Delhi’s relations with Ukraine, European governments and the U.S., among others, by their current policy on Russia.

But while New Delhi’s tendency toward fence-sitting may be a variation of its non-alignment during the Cold War, it is increasingly difficult to sustain because of India’s evolving strategic partnership with the United States. And unlike its ties with the U.S., India’s relations with Russia are not multifaceted. There is no Indian diaspora in Russia comparable to the one in the U.S., and bilateral trade, at $11 billion, pales in comparison to India’s $146 billion in trade with the United States. Moreover, rhetoric about New Delhi and Moscow’s Special Privileged Strategic Partnership notwithstanding, there is little similarity in the positions of India and Russia on most regional and international issues, whereas India’s vision for Indo-Pacific security is closely aligned with the United States.

Although it has managed to preserve its ties with Moscow so far, New Delhi will find it difficult to continue its balancing act moving forward. As the world’s democracies array against Putin’s invasion of Ukraine, India will face greater pressure to align with the democratic world or lose its standing with its Western partners.

Post Views: 160
Previous When Did the Ukraine War Begin?
Next A War-Weakened Russia Has No Strategic Value to China