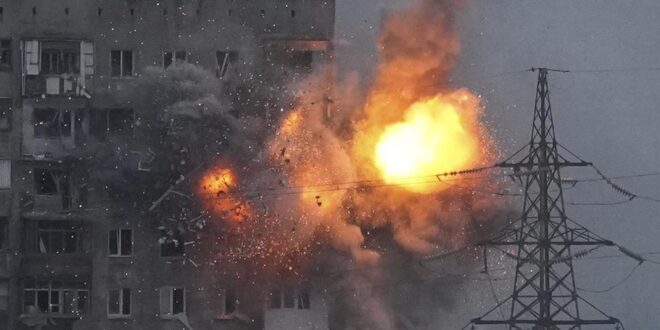 Local officials disappearing, public warnings that protests will be considered “extremism” and signs of Ukrainian resistance anyway: This is what life looks like inside some Ukrainian cities now under the control of Russian troops, according to new photos and videos from those areas posted to social media.

Russia’s advance through some parts of Ukraine may have stalled. But in the cities already captured, there has been popular pushback against what appear to be attempts at installing friendly lawmakers and quashing protests.

How Moscow’s forces handle the Ukrainian towns and cities already under its control could provide clues to Russian President Vladimir Putin’s potential endgame for this invasion and the troubles he may encounter. U.S. officials have said that it’s unclear what the ultimate goal of Putin’s military offensive may be. If the plan is to occupy Ukraine, then Ukrainians are showing that there will be significant resistance.

In one video posted to social media and verified by The Washington Post to be in the southern port city of Melitopol, Russian military vehicles drove through the street earlier this month blaring an announcement that demonstrations are prohibited and a curfew runs from 6 p.m. to 6 a.m. People responded by booing.

In another video from Melitopol that was widely circulated Sunday, pro-Russian lawmaker Galina Danilchenko addressed citizens on local television and said that there are people in the city who are “calling on you to take part in extremist actions” and to not listen to their “provocations.”

That’s a line out of the Kremlin’s playbook: Officials in Russia have designated opposition groups and their protests as “extremist,” equating them with terrorist groups such as al-Qaida.

Danilchenko said a “committee of the people’s chosen” leaders would be making all administrative decisions in the city. In a separate video message published later Sunday, Danilchenko said that Russian state television channels would now be broadcast in Melitopol, so people could “get accurate information.”

British intelligence had warned publicly before the invasion that the Kremlin was planning a similar strategy to replace Ukraine’s president with pro-Moscow politicians. So far, President Volodymyr Zelensky has remained free.

Melitopol, with about 150,000 residents, was among the first cities to fall under Russian military control two weeks ago. Zelensky said Russian forces had captured the mayor of Melitopol, Ivan Fedorov, which sparked protests over the weekend. In videos verified by The Post, crowds in the city chanted, “Bring back the mayor” and “Where’s our mayor?”

Videos circulated by Ukrainian officials appeared to show Fedorov being led away by Russian soldiers on Friday with what resembled a hood over his head. Zelensky called the alleged abduction “simple terrorism.”

He said it was the latest in a number of actions against mayors across the country who do not cooperate with Russian forces trying to occupy their cities and towns.

Despite the Russian occupation of the city, Fedorov, who is ethnically Russian, had encouraged recent demonstrations in Melitopol against the invasion.

Russia has accused Fedorov of “terrorist activities,” according to the Associated Press. The prosecutor’s office of the Luhansk People’s Republic, a Moscow-backed rebel region in eastern Ukraine, has claimed without presenting evidence that Fedorov was financing the nationalist militia Right Sector to “commit terrorist crimes against Donbas civilians.”

Then on Sunday, Ukraine’s foreign minister, Dmytro Kuleba, accused Russian forces of abducting Yevhen Matveyev, the mayor of Dniprorudne, a city of about 18,000 people in southeast Ukraine.

“Getting zero local support, invaders turn to terror. I call on all states & international organizations to stop Russian terror against Ukraine and democracy,” Kuleba tweeted.

While at least two other Ukrainian officials cited Matveyev’s kidnapping by Russian forces, the reports could not immediately be independently verified by The Post.

With a second mayor now apparently abducted, Olexandr Starukh, the regional governor of Zaporizhzhia, said Sunday on Facebook that “war crimes are becoming systemic.” He said Matveyev “has been kidnapped.” Lesia Vasylenko, a Ukrainian lawmaker, called the alleged kidnapping a “terrorist” tactic.

Zelensky said in an address Saturday that Russian forces have “switched to a new stage of terror, when they are trying to physically eliminate representatives of the legitimate local Ukrainian authorities.” He called the capture of Fedorov “a crime against democracy.”

The Ukrainian president said democratic countries would equate Russia’s actions with those “of ISIS terrorists,” and asked for “guarantees of full security to all heads of communities across the country.”

Videos posted to social media Sunday and verified by The Post showed large crowds carrying blue-and-yellow Ukrainian flags in the southern port city of Kherson, which is now under Russian military control. The crowds were chanting in Ukrainian.

“Freedom to Ukraine!” the protesters said in unison.