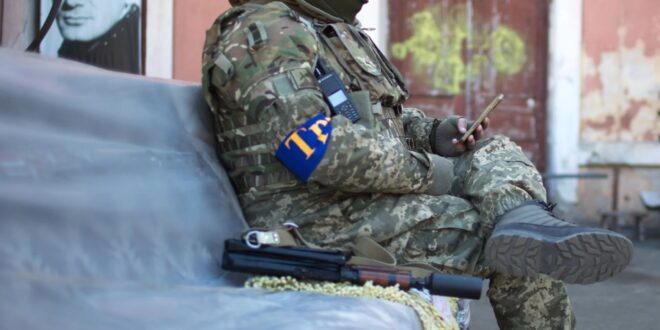 For the past weeks, Mykolaiv has been an immovable obstacle to Russia’s plans to cut off Ukraine from the sea. Thousands of volunteers organized themselves to make sure the city keeps functioning under heavy fire

On Wednesday morning it was hard to find fresh bread in Mykolaiv, a city of half a million on the Black Sea coast. Russian missiles had disrupted the electricity supply and with that bakeries and supermarkets. On the other hand, there was no shortage of potatoes. Entire convoys of truck-loads of dark brown sacks filled with spuds had arrived from western Ukraine and were now piled in distribution centers as volunteers tried to find somewhere to store them.

For the past three weeks, Mykolaiv has been on the frontline – an immovable obstacle to the advancing Russian army’s plans to cut off Ukraine from its main outlets to the sea. But there’s no hunger. The main complaint heard from clients in Anna Savyanka’s little store is that there’s no vodka. The government has prohibited the sale of alcohol since the war began, and most of the bare shelves in the store were those that usually carry vodka, brandy and wine. Their emptiness now creating a false impression of shortage.

Mykolaiv, a city of shipyards and green parks on the banks of the river Bug, is at a critical crossroads in southern Ukraine, dominating transport routes on water and land. To the east is Kherson, one of the few Ukrainian cities to be captured by the Russians so far. In Odessa, an hour and a half’s drive west along the coast, Mykolaiv is described as “our shield.” So far, it is withstanding Russia’s attempts to dominate the Black Sea, and the Ukrainian government now claims its army has gone on a counteroffensive to drive the Russians back. Military convoys are streaming toward and through the city, though it isn’t clear whether their intention is to reinforce the counterattack or bolster defenses.

Thus far, the Russians have been able to get their ground forces in to Mykolaiv only once, when a small group of armored vehicles made its way from the east and was destroyed on the street by anti-tank teams hiding in upper-floor apartments. With their ground forces stuck, the Russians are meanwhile trying to break the city with rocket attacks, mainly at night. Up to now, around 100 people have been killed by Russian rockets in Mykolaiv during the three weeks of war, about half of them civilians. The morgues and intensive care units are full of casualties. Much of the city’s resources are devoted to keep the struggling hospitals, which are also treating wounded soldiers from the front, functioning.

Inspired by President Volodymyr Zelenskyy, Mykolaiv Governor Vitaliy Kim has also transformed himself into a social media star, using his digital platforms to call on residents to defend the city by erecting massive piles of tires on the main streets to block Russian columns –and to appeal to the world.

Not all the residents are so impressed by Kim’s messages. Tatyana Sorokoput, whose home was badly damaged when a Russian rocket blasted a hole in the side of an old apartment building, complains that “we were hit here a week ago, and meanwhile journalists from around the world have been here to see us, but the authorities have yet to restore our electricity and gas.” As in the rest of Ukraine, there is a curfew at night, when the rockets fall. During the days most of the citizens remaining in Mykolaiv walk about the city without worry. Occasionally, there are dull explosions from above and little puffs of white smoke appear in the sky. The explosions are caused by Ukrainian air defenses trying to shoot down Russian drones.

There are those who are not complaining or waiting for the authorities for help. Thousands of volunteers have organized themselves to make sure the city keeps functioning despite the bombardment. “About half the population has fled to west Ukraine or outside the country. But these are mainly younger families and those who are more mobile. A lot of elderly and poor people have remained, as well as those who are vital for the war effort,” says Vitaliy Sivak, a member of a group called Mriydiy (Ukrainian for “dream and act”), which in peacetime organizes various civic projects in Mykolaiv; Sivak works primarily on tourism initiatives. “Since the war began, we’ve been running volunteer centers and distributing food, medicine, hot meals and everything people need here in a time of emergency.”

Members of Mriydiy and other groups have set up neighborhood logistics centers where supply convoys coming from western Ukraine and other countries in Europe, from as far away as the Netherlands, arrive.

Recent days have seen plenty of analyses of the logistical problems slowing down the Russian army. But Ukrainian logistics are not much better, if at all. In many places, ordinary citizens are coming through to make up for their shortages in equipment and supplies.

“We have volunteers from all professions,” says Roman Sidenko, also of Mriydiy. “It can be anything. We have drivers and owners of trucking companies distributing food. Restaurateurs prepare thousands of cooked meals for soldiers, elderly people and officials still at work in government offices. We have tailor shops manufacturing combat gear for reserve soldiers on the way to the front and metal workers making obstacles against tanks. We also have an online crowd-funding platform and people from around the world are donating.”

One of the logistics centers has been set up in a children’s art center, where volunteers are at work sorting through the containers filled with donations from across Europe. Piles of crates bear the flags of Germany, Slovakia, Poland and Italy. “The extent of donations coming to Mykolaiv is heartwarming, but the truth is that not everything that is sent is actually needed,” Sidenko says. “Yesterday we got a truck with 20 tons of clothes from Poland, and there’s no way all of it can be used. Last night we had a family of 11 whose entire house was destroyed, so we could give them clothes for everyone.”

Another volunteer center is operating in a dilapidated, once-elegant 19th century building, the “Admirals Club,” originally built for naval officers of the Russian Empire’s Black Sea fleet. The building hasn’t been used since Soviet times, but when the Russians invaded, the attackers broke inside and have made it both a fortified stronghold and a logistics center. In one wing of the building, in the first days of the war, thousands of Molotov cocktails were prepared to throw at Russian tanks. Some of the bottles were sent eastward to towns and villages on the frontline. Others have been stored away in the basement for when they are needed. A crate of them stands ready by the sandbag emplacement at the entrance. In another wing, supplies are being prepared for delivery to elderly and lonely residents.

Running the show is Anastasia Alexeyeva, a 28-year-old concert organizer who finished her army service two years ago with the rank of captain. When the war began, she sent her one-year-old baby Sofya with her mother to shelter in Romania. “We understand that the local authorities weren’t really prepared for such a large war and it is taking them time to get organized. Of course the national government is busy with the war effort,” she says. “So we’re here to do whatever is necessary in the meantime. We know that it’s not just enough to fight on the frontlines and that if people abandon Mykolaiv it will be much easier for the Russians to occupy the city. So we have taken the initiative and are helping citizens here to survive until things stabilize. We’re also helping with supplies for the soldiers.”

The crowd-funding for groups in Mykolaiv isn’t just for civilian needs. One of the groups has set up a “drone unit” that is purchasing, with donations, large quadcopters from Europe and training operators who then join artillery batteries out in the field as target spotters. Their next plan is to buy even more advanced quadcopters with thermal cameras for night operations. “It’s incredible that people from around the world are contacting us, donating and helping with buying and supplying the drones,” says one of the volunteers organizing the unit.

“We are helping the army from here in every way we can,” says Alexeyeva. “As civilians, we can also do our part in stopping the Russians.”