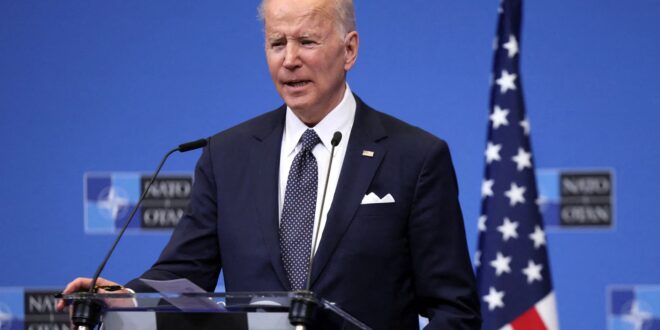 Biden Warns of Food Shortages in Wake of Russia–Ukraine War: ‘It’s Going to Be Real’

President Biden warned that the Russian invasion of Ukraine will likely cause food shortages in some parts of the world because both countries are major exporters of wheat, in remarks to reporters in Brussels on Wednesday.

“It’s going to be real. The price of these sanctions is not just imposed upon Russia; it’s imposed upon an awful lot of countries as well, including European countries and our country as well,” Biden said. “Both Russia and Ukraine have been the breadbasket of Europe in terms of wheat, for example — just to give you one example.”

Biden added that the heads of the G-7 nations discussed potential food shortages and ways to alleviate them, raising the possibility that the U.S. and Canada could increase exports.

“We had a long discussion in the G-7 with both the United States, which has a significant — the third largest producer of wheat in the world, as well as Canada, which is also a major, major producer. And we both talked about how we could increase and disseminate more rapidly food shortages,” Biden said.

Ukraine and Russia combined export over a quarter of the global supply of wheat and one-fifth of the world’s corn supply, Bloomberg noted earlier this month. Several Mediterranean nations could face a major supply crunch. Over 80 percent of Lebanon’s wheat imports come from Ukraine, while over 60 percent of Turkey’s wheat imports come from Russia, according to U.N. Comtrade data cited by the Financial Times.

White House press secretary Jen Psaki said at a press conference earlier this week that the U.S. is itself not expecting a food shortage for Americans.

“While we’re not expecting a food shortage here at home, we do anticipate that higher energy, fertilizer, wheat, and corn prices could impact the price of growing and purchasing critical . . . food supplies for countries around the world,” Psaki told reporters.

Post Views: 121
Previous NATO steps up defenses over concerns Russia may use chemical attacks
Next Biden’s NATO Trip: Uniting Against Putin, Sending a Message to China