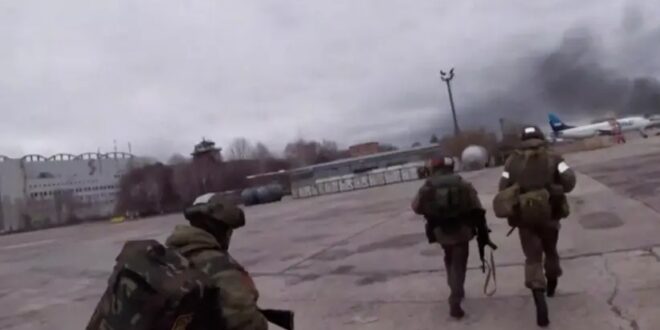 Nearly a month after Russian forces invaded Ukraine, there are growing indications Ukrainian forces are going on the offensive, targeting Russian troops and, in some cases, retaking lost ground.

Ukraine’s Defense Ministry said Tuesday that its forces had retaken Makariv, a suburb of the capital of Kyiv, following heavy fighting.

Ukraine’s military also appeared to launch counteroffensives in the eastern city of Izyum, 120 kilometers southeast of Kharkiv, and in areas near the city of Kherson in the southern part of the country.

U.S. officials declined to comment on the Ukrainian efforts, but they did say that in some parts of the country, the momentum appears to be shifting.

“We have seen indications that the Ukrainians are going a bit more on the offense now,” Pentagon press secretary John Kirby told reporters late Tuesday.

“They have been defending very smartly, very nimbly, very creatively in places that they believe are the right places to defend,” he said. “And we have seen them now in places, particularly in the south near Kherson, they have tried to regain territory.”

Other U.S. officials were even more blunt about the state of Russian military operations.

“Whether Russia takes a city, takes a town or takes more territory, they are never going to be able to achieve the purpose they set out … which was to bring this country to heel,” he said. “The brave citizens of Ukraine are refusing to submit. They are fighting back.”

On its English-language Telegram feed, Russia’s Ministry of Defense portrayed a vastly different war effort, praising Russian forces as they advanced on parts of southeastern Ukraine while Ukrainian forces fled, and claiming success in taking out Ukrainian fuel depots and positions with “high-precision long-range” weapons.

A senior U.S. defense official, briefing reporters on the condition of anonymity in order to discuss intelligence, confirmed Russian ships in the Sea of Azov had begun shelling the Ukrainian city of Mariupol, which has been under heavy fire for days.

But the official said other intelligence suggests Russia’s invasion of Ukraine has become a logistical nightmare, with Russian forces still struggling to overcome shortages of fuel, food and precision-guided munitions.

Pentagon officials said Tuesday those shortages could be part of the reason Russia has “at least in one instance” used an advanced hypersonic missile to take out a Ukrainian military storage facility, a move one official described as a “head-scratcher.”

Even basic supplies seem to be lacking.

“We picked up some indications that some of their soldiers are suffering from frostbite because they lack the appropriate cold weather gear,” the official said. “Troops have actually suffered and [have been] taken out of the fight.”

Civilians, too, are taking a toll as fighting rages across the country.

Those who have not been able to escape are facing an increasingly dire situation.

“There is nothing left” in Mariupol, Ukrainian President Volodymyr Zelenskyy declared in a video address Tuesday to the Italian parliament, a day after the government in Kyiv rejected a Russian ultimatum to surrender the city by dawn.

And hopes of reaching survivors with aid appear to be fading.

Cities and towns experiencing the most intense fighting “don’t have more than 3-4 days’ worth of essentials, like food,” he added.

The U.S., meanwhile, warned Russia is increasingly taking out on civilians its inability to achieve its objectives in Ukraine.

“Clearly, there are civilian casualties, and clearly, they’re mounting every day because of the indiscriminate attacks that the Russians are conducting … as they become more frustrated,” Kirby told reporters at the Pentagon.

“We believe we should call it like we see it, and we believe that there are war crimes being conducted by the Russian forces,” he added.

Russia has repeatedly rejected accusations of war crimes, even as the United States and other Western countries raise concerns that Russia may be preparing to use chemical and biological weapons in Ukraine, or even nuclear weapons.

“If it is an existential threat for our country, then it can be used in accordance with our concept,” Kremlin spokesman Dmitry Peskov told CNN Tuesday when asked whether Moscow might consider unleashing some of its nuclear arsenal.

“We have a concept of domestic security, and it’s public. You can read all the reasons for nuclear arms to be used,” he added.

U.S. President Joe Biden is set to travel to Brussels on Wednesday to meet with NATO and European allies.

They are expected to announce a new round of sanctions against Russia as well as longer-term adjustments to NATO’s force posture in Europe.

While in Brussels, Biden will also meet with G-7 and European Union leaders before traveling to Poland.