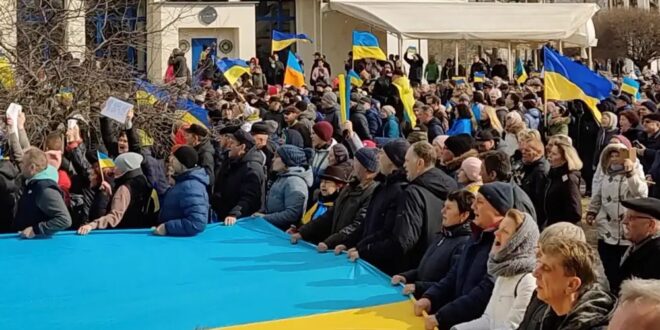 A Ukrainian mayor who was abducted by Russian forces was released after a mass protest by the town’s residents, reports say.

Russian forces entered the northern Ukrainian city of Slavutych, near the Chernobyl power plant, on Saturday and seized a hospital, and took the mayor Yuri Fomichov hostage, Ukrainian officials said.

Slavutych, population 25,000, was purpose-built for Chernobyl nuclear power plant workers after the 1986 disaster.

Russian forces captured the plant when it invaded Ukraine a month ago, and it continued to be staffed by Ukrainians.

He said that Russian troops opened fire in the air and threw stun grenades at the crowd, but they refused to disperse.

Mayor Yuri Fomichov was released a few hours later, and a video posted on social media by a local journalist appeared to show him speaking to the protesters.

“In captivity, I negotiated with the occupiers,” he said in the video, according to The New York Times. “It was agreed that if it is confirmed that our military is not in the city, everything will be calm.”

“Slavutych remains under the Ukrainian flag!” he said.

Fomichov said that Russian forces had instructed residents to hand over any weapons and added that the national police and the Ukrainian military were no longer in the town.

“We will appoint people on duty to prevent looting, chaos, and disorder,” he said, according to The New York Times.

The paper noted that it was not clear if Fomichov was speaking freely.

Since Russia launched its invasion of Ukraine, it has captured several mayors, including in Dniprorudne and Melitopol, where they installed a new mayor.